Indians have something to worry about - their privacy is dead

India Today cover story examines how digital corporations and an all-seeing state are mining your personal data for profit and control.

When bestselling writer Yuval Noah Harari talked at the India Today Conclave in Mumbai of the possibility of the North Korean government forcing its citizens to wear a bracelet transmitting biometric data to government data centres to monitor how people feel about their leader, it seemed straight out of science fiction.

In a Digital Dictatorship, he warned, technology would be able to extract high-precision biometric data from people and report back to a centralised decision-making control system, owned by governments or by corporations­ - or both.

It turns out we’re not so far off from that reality, given recent revelations by a whistleblower of the role of British firm Cambridge Analytica (CA) in using a data-harvesting app that was allowed by Facebook to gather data of 50 million users without their consent. 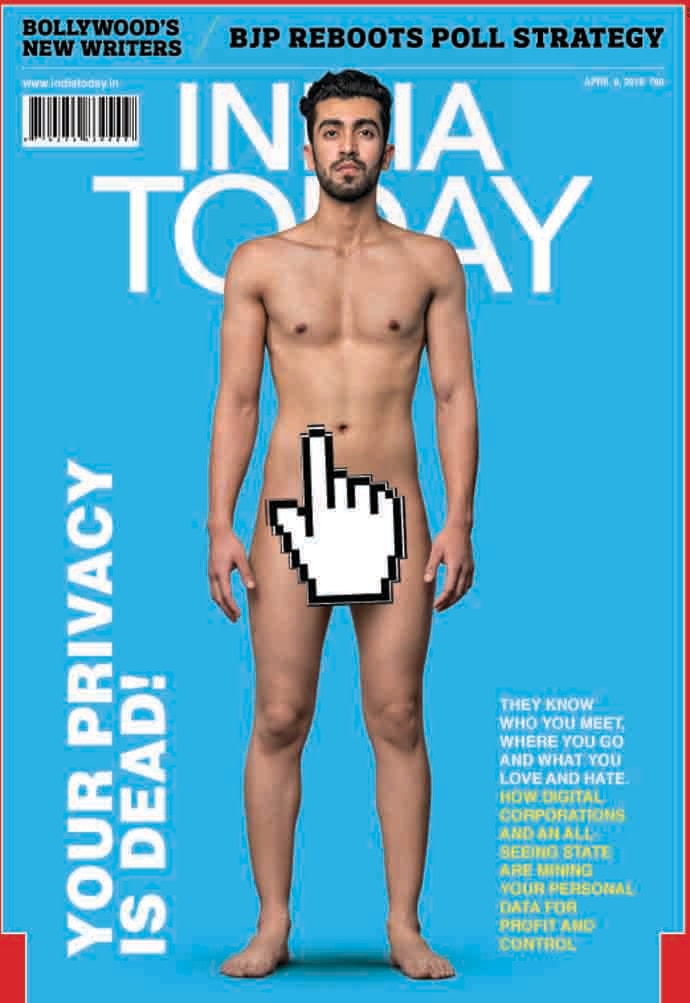 Set up in 2014 with Steve Bannon, the former chief strategist of United States President Donald Trump, as vice-president, CA used the data to aid Trump’s 2016 presidential campaign as well as to manipulate audience behaviour in the 2016 Brexit referendum and the 2017 Kenyan elections.

According to the whistleblower, former CA employee Christopher Wylie, the Facebook data helped develop psychological profiles of users, which was subsequently used to influence them. This, reportedly, had a greater impact on voters than traditional advertising.

The story has an Indian dimension too, with Wylie claiming that the Congress might have been CA’s client in the past. The Congress has strongly denied the allegation and that explains the current slanging match between them and the BJP on this issue. Be that as it may, the larger question is of the emergence of transnational digital corporations such as Facebook, Google and Amazon whose access to information has given them great power with practically no accountability.

They know everything about us - where we are, who we talk to, what we buy, access to our e-mails and our contacts, our photographs, our interests, our predilections and more. Enough to build a complete psychological profile of us.

Now the big question is how all this data is used and by whom. I may have given my consent in order to use the services offered by these companies, but as it is now being discovered, this has huge societal implications. This data is the new gold in the hands of private corporations whose prime motive is profit. They are like the monopoly oil companies of yore which had to be broken up to avoid concentration of economic power.

It is possibly worse, as it can be used, as we have seen in America and other countries, to subvert democracy. Messages can be sent that play to our prejudices. Add to that fake bots and Twitter accounts that can influence the way we think. Another byproduct of this algorithm-driven data mining is that we will continue to be served the kind of content we had liked in the past. This means the converted speak to the converted with the result that diversity of opinion and debate get restricted.

This is not a problem confined to developed countries. With over 250 million active users, India has the largest user base for Facebook. WhatsApp and Instagram, two other entities owned by Facebook, have over 200 million and 53 million users in India, respectively. India has a low social media penetration of 19 per cent at the moment but with a 31 per cent annual growth rate, it is the second fastest-growing country in this aspect.

Predicting voter behaviour through Facebook trends may be vastly overrated, but politics is increasingly about selling a product. No wonder the number of followers or likes one has is a matter of significance. This explains why heads of state like Trump and Narendra Modi use social media platforms like Twitter to announce executive orders, conduct diplomacy and communicate directly with voters. This controversy comes close on the heels of embarrassing leaks in India's biometric ID programme Aadhaar, which, with over 1.1 billion users, is the world's biggest database.

The cover story, written by senior associate editor Kaushik Deka, with columns by experts across several fields, examines all aspects and underlines the necessity of regulating potential misuse of data as well as defining the privacy law clearly - the Supreme Court has already said Indians enjoy a fundamental right to privacy, that it is intrinsic to life and liberty and thus comes under Article 21 of the Indian Constitution.

India is the fifth most vulnerable country in the world in terms of cyber security breaches, according to the Internal Security Threat Report of 2017 by Symantec. Clearly, unless you wish to lead a life of an ascetic, it is impossible to escape the digital world. It has changed our lives for the better, but at a huge cost.

These new digital gatekeepers have the potential of poisoning our politics and tainting our society.

There is also the danger of the government getting its grubby hands on data of private citizens. Democracy is not just about elections, but also about protection of people’s liberties and freedoms. There is an urgent need for regulation which is transparent about the sharing and use of data.

So next time you are on a social media platform or on a search engine, remember many Big Brothers are tracking you. Privacy is truly dead.

#Modi government, #Facebook-Cambridge Analytica scandal, #Privacy, #Data Breach
The views and opinions expressed in this article are those of the authors and do not necessarily reflect the official policy or position of DailyO.in or the India Today Group. The writers are solely responsible for any claims arising out of the contents of this article.