Why Debabrata Saikia is the smartest choice for Congress in Assam

His low profile and measured visibility has managed to keep him politically fresh in the public psyche.

During several interviews to TV channels on May 19, the day when BJP swept the Assam Assembly polls, Himanta Biswa Sarma, once the second most powerful Congress leader in the state, and now holding the same status in BJP, said that the Congress promotes dynasty politics — only sons and daughters of veteran Congress leaders are given prominence in the party.

Ten days later, Congress president Sonia Gandhi appointed Debabrata Saikia, son of former Assam chief minister Hiteswar Saikia, as the party’s leader in the Assembly. It will, however, be wrong to attribute Saikia’s elevation to his family background.

In the current circumstances, there could not have been a better choice for the party. At 51, he is relatively young and is acceptable to most of the 26 Congress MLAs who managed to win.

Though, during his father’s reign, he was one of the two power centres in the state, for the last three decades he has remained in political hibernation. 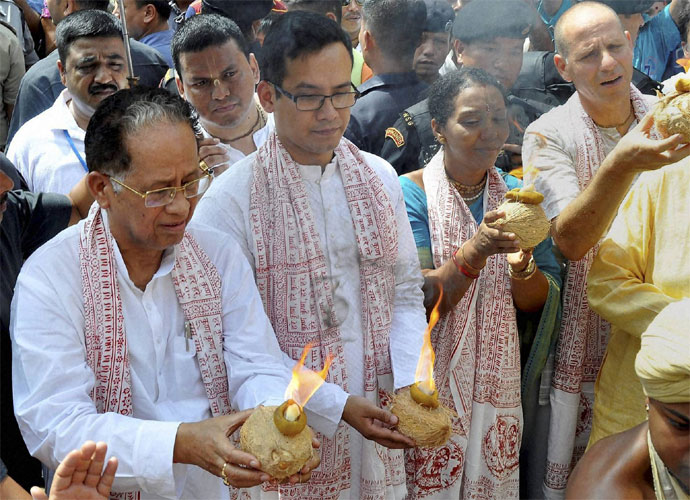 Congressmen in the state are now vocal about the senior Gogoi’s desperate attempt to promote his son as his political heir.

He became an MLA only in 2011. His low profile and measured visibility in public space — from television to social media — has managed to keep him politically fresh in the public psyche.

The other contenders for the post were former forest minister Rakibul Hussain and former PWD minister Ajanta Neog. Though both managed to win, the two leaders have a public fatigue about them. Hussain was widely blamed for his alleged failure to curb rhino poaching in the state.

Neog has been seen as an inefficient leader, who remained a minister for her constituency and not for the state. Both leaders are likely to invite the ruling party’s aggressive attack in the Assembly.

Hussain was once the closest friend of Himanta Biswa Sarma. The two are now bitter rivals. With other promising young leaders such as Sushanta Borgohain biting dust in the polls, the party was not left with many choices.

Besides, Saikia’s selection has not been an arbitrary decision by the Congress high command. According to sources, Sonia Gandhi personally dialled the numbers of several Congress leaders from the state to take their opinion on the selection of the Congress Legislature Party (CLP) leader. Most of them suggested Saikia’s name. They hoped this dynast would rid the party of the Gogoi dynasty — the father-son duo of former chief minister Tarun Gogoi, and son Gaurav Gogoi.

Congressmen in the state are now vocal about what they used to talk in hushed tones earlier — senior Gogoi’s desperate attempt to promote his son as his political heir sank the party.

Saikia’s selection as the leader could be a masterstroke for the party, and ironically, the logic could be his family background.

It was Hiteswar Saikia who introduced Himanta Biswa Sarma to Congress politics in 1992. Sarma has always publically accepted the former chief minister as his political guru. Sarma’s loyalty to his guru can be gauged from the fact that Saikia’s constituency did not figure among the over 200 rallies he addressed during the Assembly election campaign. "He is my guru putra, I cannot attack him," Sarma reportedly told his supporters.

Will Sarma, the most lethal political weapon BJP has acquired in the state, now take on his "guru putra" in the Assembly? It could be a smart Congress strategy to blunt Sarma’s verbal volleys in the house.

Post your comment
#Sonia Gandhi, #Congress, #Assam
The views and opinions expressed in this article are those of the authors and do not necessarily reflect the official policy or position of DailyO.in or the India Today Group. The writers are solely responsible for any claims arising out of the contents of this article.