Decade of development: Why NN Vohra's tenure as J&K Governor will be worth remembering

Even before he was appointed as the Governor in 2008, he played the role of an interlocutor in Kashmir politics.

The former Governor, Narinder Nath Vohra, served the restive Himalayan state of Jammu and Kashmir for over a decade from June 25, 2008 till August 21, 2018.

The longest-serving civil Governor’s tenure came to an end with the appointment of first new political Governor, Satya Pal Malik, who is also seen as an intrusive traveller across political spectrum.

Known for his administrative acumen and vast experience in Jammu and Kashmir, Vohra had a unique modus operandi to reinforce good governance and deliver urgently on the development front to bring J&K back on course.

While chairing some of the last meetings of Sports, Election and Lakes and Waterways Development Authority (LAWDA) departments at the civil secretariat, Vohra directed the officers to show positive results in providing good governance and reach out to the people of the state with developmental programmes.

“There are many problems, which you (officers) can address at your own level. People amid this turmoil need your honest services,” Vohra told officials, adding “Our State is full of diversity and it comes with varied issues and public grievances. The administrative machinery must chip in to address genuine public demands on priority. Give them good governance, they will start inculcating trust in the governance and administrative system,” he shared with the officials. Vohra is known for his public relations. (Photo: Reuters)

He also urged the officers to continue to serve the people of the state with renewed vigour for the betterment of the state. He expressed his dismay over the slow pace of many developmental projects, including the Dal restoration programme.

Within three months of his latest stint as the head of the administration in Jammu Kashmir, Vohra and his frontline team of advisors and chief secretary succeeded in revitalising the entire administrative apparatus, from the top to the bottom, to function with efficiency, speed and accountability and deliver quick results on the ground on developmental and governance fronts.

The focus of the former Governor’s administration, during this period, had been to work through transparency and consultation and promote a culture of excellence in governance characterised by integrity and highest standards of deliverance.

Vohra, who is known for his public relations, had also repeatedly reiterated judicious use of resources to ensure that the funds are utilised according to priorities keeping the larger public good in mind.

He would personally monitor the responses to the ‘Governor’s Grievance Cell’ and urge his officers to make sure that every grievance is addressed.

Since the imposition of Governor’s rule in June till August 10, the Governor’s Grievance Cell had disposed of 9,866 (including those received earlier) by forwarding them to the departments concerned for timely redressal. The officers in the administration say that with Vohra’s continuous monitoring, the cell with its manpower has potential to become a stout institution, which can curb malpractices and corruption along with improving governance. In the eight meetings of the State Administrative Council (SAC), chaired by the former governor, important decisions were taken, especially on the developmental, governance and welfare fronts, which were otherwise hanging fire for quite a long time.

Piloting the guiding principles of ‘Mission for Delivering Development’ and ‘Mission on Delivering Governance’, the former Governor’s administration had initiated a series of tangible measures to give a determined push to the developmental efforts and improve delivery of governance in the state.

In order to put the derailed system back on track and at the same time reach out to the people, the former Governor’s administration started with reinforcing administrative discipline by ensuring punctuality of government employees in their offices.

At the same time, an institutionalised Grievance Redressal Mechanism was put in place at various levels in the government to ensure outcome-based redressal of people’s grievances and the results are already there to behold, with around 10,000 public grievances having been disposed during the past two months.

As a part of its public outreach programme, the former Governor’s administration, led by Vohra himself, began touring various parts of the state to personally take stock of the developmental needs, progress of works and public issues on the ground.

To ensure citizen-centric governance, Vohra had time and again reiterated that instead of designing and delivering services based on their own assessments and processes, the government functionaries should plan the developmental and welfare initiatives in tune with the needs of the people they serve. 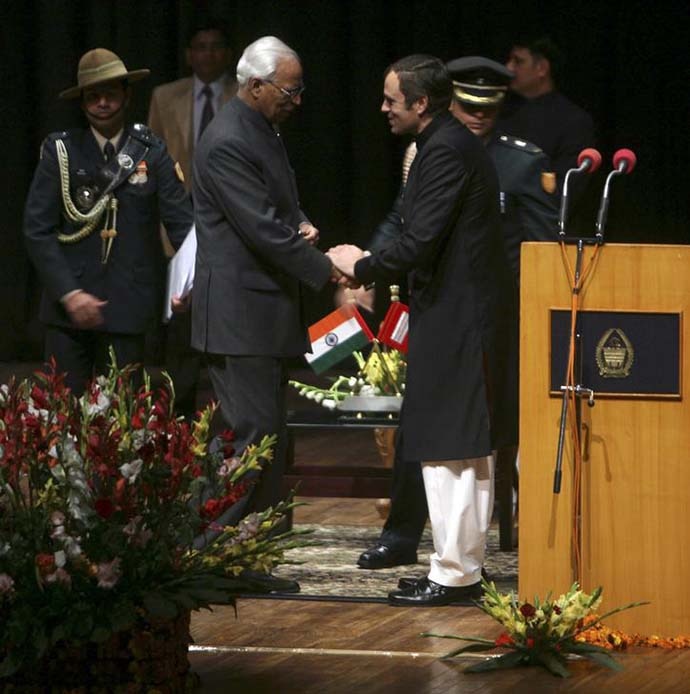 During his ten years in the office, the state was placed under his rule for four occasions.

On June 25, 2008, when Vohra was appointed, he became the first civilian Governor of J&K after Jagmohan since militancy broke out in the state in 1989.

But soon, the PDP pulled out of its alliance with the Congress, and the Governor’s rule was placed in the state.

After the 2014 elections, when the PDP and the BJP took three months to form an alliance, the state again saw the Governor’s rule that ended in March 2015.

Former chief minister Mufti Mohammad Sayeed's death again becomes the cause for the promulgation of the Governor's rule on January 8, 2016, after allies — the PDP and the BJP — deferred the government formation process for three months.

Vohra’s rule came to an end on April 4, 2016, after Mehbooba was sworn in as the chief minister.

Since Independence, Governor's rule has been promulgated in Jammu and Kashmir on eight occasions. Seen as an able administrator Vohra remained non-controversial throughout his stint and he carried out development programmes in J&K.

“Vohra’s tenure was unmatchable,” senior-rung officials unanimously expressed. “He has set a very high bar for the new governor,” they said.

In his Independence Day address, Vohra announced that polls to the state’s urban local bodies and panchayats will be held September onwards. He would tell his officers that New Delhi doesn’t have justification to announce Assembly elections when the state was unable to hold local bodies’ elections.

“The prolonged delay in establishing democratically-elected self-governing bodies at the grassroot level in urban and rural areas has resulted in the loss of considerable funds which would have been available if elections had been held,” he said in his August 15 speech.

While announcing the panchayat polls, which have not been held in the state since 2011, Vohra had appealed to leaders of all political parties to support the administration “to improve efficiency and accountability in every arena of functioning and to lend their valuable support towards engendering an environment in which the forthcoming elections to Municipalities and Panchayats produce a positive outcome”.

He had started meeting all the political party representatives, journalists, civil society members and other stakeholders.

The former Governor was accorded a warm send-off by the state administration at a modest farewell function, organised at SKICC.

Advisor to Governor, Khurshid Ahmed Ganai said that Vohra’s decade-long tenure will be remembered by the officers and people of Jammu and Kashmir for a long time as he worked hard for the development and welfare of the state. He narrated his own experiences while working with him, and said that he learnt a lot from Vohra, and described him a fatherly figure for the administration.

Vohra had been the Central government's pointsman for Kashmir for many years now. Even before being appointed as a Governor, he played the role of an interlocutor in Kashmir politics, holding parleys with all the important stakeholders. His negotiating skills and deep understanding on issues in J&K are being recognised by all, cutting across the party lines. The former Governor enjoys a great degree of respect and acceptability in Kashmir.

Also read: Why scrapping Article 35A could deliver a final blow to Kashmiriyat

Post your comment
#Development, #Governor's rule, #Jammu and Kashmir, #NN Vohra
The views and opinions expressed in this article are those of the authors and do not necessarily reflect the official policy or position of DailyO.in or the India Today Group. The writers are solely responsible for any claims arising out of the contents of this article.

A Srinagar-based Journalist. He has also worked as a media manager with the state government.