Archbishop is wrong: Christians in India are not under any threat

The clergy must desist from creating more fissures.

As the nation was getting back to business after a prolonged Karnataka election results opera, the Archbishop of Delhi, Anil Couto — through his pastoral letter citing “turbulent political atmosphere”, and urging priests to “pray for the country” before the 2019 Lok Sabha polls — has pushed the Catholic Church of India on a collision path with the NDA government for the second time in succession.

For the uninitiated, a similar pastoral letter was issued by Archbishop Thomas Macwan of the Archdiocese of Gandhinagar, in the run-up to the Gujarat polls last year creating an unwarranted hornets' nest. In his pastoral letter, the Gandhinagar Archbishop urged people to defeat “nationalistic forces” from taking over the country. 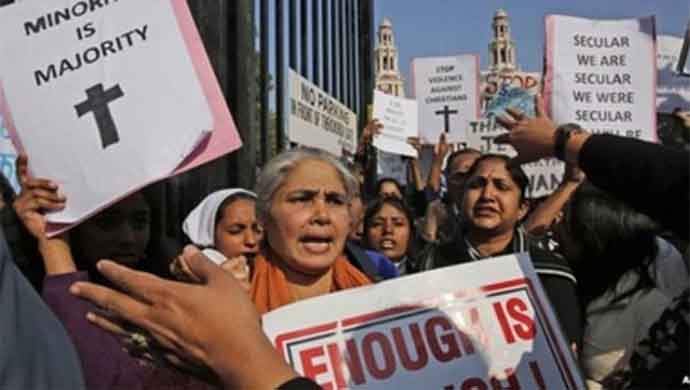 'There have been instances of violence against Christians, but that has been dealt according to law.'

Defending the letter, rights activist and former president of the All India Catholic Union, John Dayal, reasoned during a television debate, “There is nothing wrong about the letter.” Adding further, he said, “I have travelled extensively across the country and the minorities are living in fear of the present government and its allied organisations.”

The assessment by Dayal is wrong to a large extent. There have been instances of violence against Christians, but that has been dealt according to law. And in most instances the perpetrators of the crime have been punished by relevant courts of law. As far as the Christian community in India is concerned, it is largely, a peaceful minority that has always stayed within the realm of law in India.

It is also a fact that a Catholic majority state like Goa has a BJP government, Nagaland, a northeastern state with a sizeable amount of Christian population has the BJP as a coalition partner, the BJP has made spectacular inroads into states like Meghalaya, Tripura, Manipur, Mizoram, etc, areas labelled to be hotbeds of Christian missionary activities.

The rise of the BJP in states with Christian populations debunks the theory that Christians are being targeted or victimised. The Catholic Church needs to clarify its stand with regards to the series of pastoral letters issued by its various Archdioceses, time and again. In India, although the Catholic Church is the largest with regards to its laity and resources, other denominations like the Orthodox Syrian Church, the Protestant Church etc, also has a sizeable following. And these non-catholic churches have not reported itself to be victimised by the incumbent government till date.

Denouncing the action of the Archbishop, former Congressman from Goa, Savio Rodrigues, in an open letter, states, “Unfortunately it’s the Catholic Church that acts as custodian of Jesus’s teachings that appears to be walking the path that is completely opposite to the lessons in humanity that Jesus expressed through his teachings. Instead of offering a fish are we attempting to offer the child a snake?”

“With due respect to your office and your vocation as Archbishop of the Roman Catholic Archdiocese of Delhi, I am shocked, disappointed and downright angry reading the contents of your pastoral letter,” lamented Rodrigues.

Cutting across denominations and groups, the Indian Christian community has contributed in all walks of life and has never been at the cross roads with any political ideology. The community has participated in polls with the same fervour like their compatriots and elected, whoever was the best to serve them, irrespective of ideology and affiliation.

Also read: Why I disagree with Delhi Archbishop and his 'pray for 2019' letter

#Modi government, #Christians, #Secularism, #Delhi archbishop
The views and opinions expressed in this article are those of the authors and do not necessarily reflect the official policy or position of DailyO.in or the India Today Group. The writers are solely responsible for any claims arising out of the contents of this article.

A former media professional and at present a communications practitioner. His focus areas are security, foreign affairs, homeland security issues, and specialises in organising and hosting security-related conclaves.