Kejriwal’s comeback is all the more significant because he repeated his 2015 feat so convincingly.

As far as the Delhi elections are concerned, the writing on the wall is clear. It’s AAP all over again. As its founder-supremo, Arvind Kejriwal, exulted on national television, blowing a kiss to his supporters and party workers, “I love you.”

Actually, it would have been more accurate to say that the people of Delhi love him. Kejriwal’s comeback is all the more significant because he repeated his 2015 feat so convincingly. In the run-up to the vote, India’s ruling party, the BJP, put in everything to turn the tide so clearly going against them. Amit Shah, Union home minister and former party president, himself led the charge. But it was too little too late. As AAP leads crossed 60 in the 70-member Assembly, Kejriwal chanted, “Bharat Mata ki Jai” and “Vande Mataram” and also “Inquilab Zindabad” gesturing to his Muslim and Left-liberal constituency. He not only showed himself to be a family man, with his wife by his side but announced that it was her birthday. It was also, he said to cheers, Mangalwar (Tuesday), the day dedicated to Lord Hanuman. 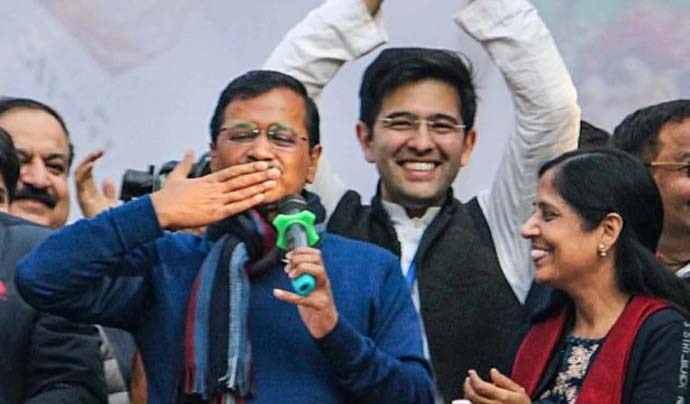 Blowing a kiss to his supporters and party workers, announcing it was his wife's birthday, thanking Lord Hanuman on Mangalwar, Kejriwal exudes a certain charisma. (Photo: PTI)

Kejriwal signalled that the BJP did not have the monopoly over either Hinduism or patriotism. Having trounced them again in India’s capital, was Kejriwal once more marking his national ambitions? The AAP’s return to power is all the more significant because it did not exist at the time of the November 2008 Assembly elections, in which the Congress, led by Sheila Dikshit, won 43 out of 70 seats. The BJP, whose CM face was Vijay Kumar Malhotra, came a distant second, with 23.

Arising out of Anna Hazare’s India Against Corruption crusade, Kejriwal’s AAP was formed in 2012. In the 2013 hustings, it made an impressive debut with 28 seats. The BJP came out on top with 31 and, with its ally, its total tally touched 34. AAP had drawn a whole new generation into the political process. It also had the youngest Cabinet ever. In the hung Assembly, Kejriwal became CM for the first time, with “unconditional” support from the Congress. But the honeymoon lasted only 49 days. In 2015, the AAP returned with a stunning triumph of 67 out of 70.

As far as numbers go, it seems to be a repeat scenario this time too. Zero for Congress. Just slightly better for the BJP. We must understand the Delhi election results declared on Tuesday against this background. The BJP has been unable to improve its count substantially. In elections anywhere, there is just one dictum: Jo jeeta wahi Sikandar. Winner takes all. The AAP campaign weathered not just anti-incumbency and defections, but Kejriwal’s own maverick mentality. Credit must be given where it is due. AAP and Kejriwal have done a lot of things to retain the trust of the people of Delhi. This includes a drastic reduction in corruption accompanied by a slew of sops and inducements.

In addition, the Delhi government has significantly improved schools and healthcare. Despite having a different party ruling the Centre, Kejriwal has done well as Delhi CM. Delhi voters have shown themselves to be discerning. Especially as they voted en masse for Narendra Modi in the Lok Sabha polls in 2019.

But this also means that the BJP must acknowledge its errors. The polarising politics of Shaheen Bagh was not enough to win Delhi. The people asked for much more. For one, a credible CM face to taken on the tried and tested, some would add charismatic, Kejriwal. The BJP has seen yet again that the Modi-Shah duo cannot work wonders forever by themselves in the states.

A second, even third rung, of leadership is needed. The prevention of infighting, which they accomplished this time, and better issues to fight for would also help. In any case, the BJP must get its act together if it wants to end its losing streak.

Also read: What are the lessons for AAP, BJP and Congress from Delhi Election results?