The Delhi legislative assembly election 2020 was a very important election due to various reasons, both national and local.

The Aam Aadmi Party (AAP) on February 11 achieved a spectacular victory against the Bharatiya Janata Party (BJP) in Delhi. The latest trends are suggesting that the AAP will get 62-63 seats in Delhi, followed by BJP, which will get around seven-eight seats. To be very specific, this victory is a referendum against the divisive politics of the BJP.

The Delhi legislative assembly election 2020 was a very important election due to various reasons, both national and local. The BJP in the last few days has run a grand show of campaign with union ministers, MPs, chief ministers of BJP-ruled states, and the whole show was led by Amit Shah and Narendra Modi.

AAP — led by Arvind Kejriwal — has maintained a positive campaign throughout the election. This is the first time in the history of India that people have voted for work done by the AAP government in Delhi over all else. This election was also an election where people voted for better education, better healthcare and to make Delhi a better city. 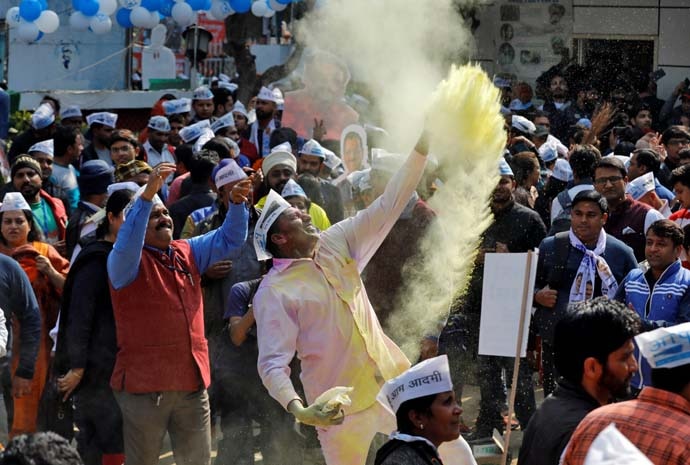 AAP supporters celebrate after learning of the poll results outside the party headquarters in Delhi. (Photo: Reuters)

But it is also time for AAP to deliver the best. People of Delhi, amid many odds and pressures, have put their faith in AAP. The AAP government's first target will be to complete all the ongoing pending works and projects, like increasing the number of buses, finishing the installation of free Wi-Fi and building more mohallah clinics.

One of the very first works which the AAP govt should start with is the preparation to provide a round-the-clock supply of pure piped drinking water and continuation of provision of 20,000 litres of free water. The AAP government will also put major emphasis on the education sector and will work to provide a world-class education facility to every government school student in Delhi.

The AAP government will also have to work on making travel for all students free in Delhi buses. This will save money for the economically backward families in Delhi. Bus travel for women in Delhi is already free. Combating air pollution is another big task for the new government. AAP has promised to make Yamuna cleaner and this is a huge project for the government.

The AAP government will have to put Mohalla Marshals for the safety of women in the city, and this could be a game-changer for Delhi in terms of women security. AAP has also promised to keep shopping malls and markets in capital open round-the-clock and it will start on a pilot basis.

AAP’s 10 guarantees and the promises in their manifesto will be the key targets for the government to meet. It is now time for AAP to deliver their promises and to make Delhi a truly world-class capital. AAP won the elections based on the work they had put in in the past five years. It is the responsibility of the party to deliver its best in the next five years.

Also read: How the Delhi voter will respond to poll polemics