Delhi election results: How democracy has made the voter a clown

The process began when the results of the 2014 national elections came out. Many called it a vote for Hindutva.

There are many people caught in thankless jobs. The misery of this unfortunate lot is compounded when they are blamed for a job not well done or a job done badly. This lot can, however, find solace in Electronic Voting Machines (EVM).

In a new trend — only as new as the EVM itself — parties start dropping hints that the machines can be tampered with, when they sense defeat. When they win, they just win and move on. No apologies to EVMs are sent because EVMs can’t demand apologies. Also, EVMs are not voters who need to be kept in good humour. 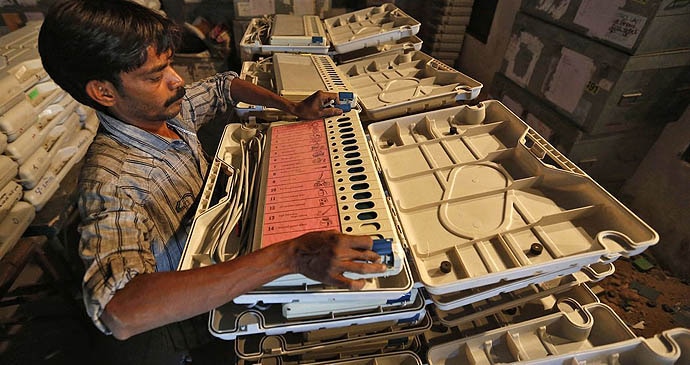 Nobody ever appreciates the fact that EVMs have made counting of votes so fast that results of most elections are out by the time some are still in bed. (Photo: Reuters)

So forget apologies; nobody ever appreciates the fact that EVMs have made counting of votes so fast that results of most elections are out by the time some are still in bed. And once results are out, it is time for analysis.

Parties start defending their poor performance or celebrating their astounding success, if it is astounding that is, depending on whether they lost or won. But traditionally whether parties won or lost, they never blamed the voters — until Delhi Assembly election 2020.

In an electoral system that claims to be of the people, by the people and for the people, people were made to believe that they were sacrosanct. The real reason no one blamed people was because someone who hasn’t voted for you once, could vote for you the next time. Why burn bridges?

But Delhi elections mark a clear burning of bridges with voters. Leading this new project is the world’s largest political party, the BJP.

The tweet put out by BJP IT cell chief Amit Malviya was telling in that regard.

Hate politics of anti CAA protestors won. But our ideological opposition to politics of Shaheen Bagh is uncompromising, our commitment to civilisational issues like CAA, abrogating 370, abolishing Triple Talaq and facilitating Ram Mandir unwavering... We will emerge stronger...

A certain TV anchor, believed to be close to the BJP, went to the extent of directly blaming voters for choosing freebies over national security.

One of the many reasons attributed to the BJP’s 2019 win of 303 seats was the Pradhan Mantri Ujjwala Yojana, under which free gas cylinders; filled, that too, were distributed to women. There was also the Pradhan Mantri Kisan Samman Nidhi scheme under which farmers were given Rs 6,000 each in three equal instalments. The same freebies are believed to have won Telangana Rashtra Samithi (TRS) chief K Chandrasekhar Rao a second term in power in 2018. It was by distributing such ‘freebies’ that former Tamil Nadu chief minister late J Jayalalithaa, called Ammu as a child, became Amma for the people of Tamil Nadu.

In fact, benefits extended to people were never called freebies, as they have come to be called pejoratively this Delhi election, but were welfare schemes.

So from (ostensibly) venerating voters, what exactly has led to party and party supporters blaming them without mincing words?

Actually the process started when the results of the 2014 national elections came out. Many started saying that people voted for Hindutva. But that allegation didn’t come from parties or party ideologues, like it has happened this time in Delhi.

Greek philosopher Plato said that the longer a democracy lasted, the more democratic it would become. Plato, of course, also predicted that when a society arrives at its last-stage democracy, a tyrant is born. But democracies have within them in-built mechanisms to keep potential tyrants in check. That seems to be a point Plato didn’t envision. But coming back to Plato’s point: democracies becoming more democratic over time could also explain why voters get blamed for making the choices they make.

As democracies create societies that are increasingly egalitarian, remember, old orders are undergoing upheavals. The elite are losing their hold on privileges in the face of increased questioning and the rise of new claimants. They are trying to hold on to their power structures even as newer forces are trying to rise to their status. More democracy has thus divided voters down the middle. They assume ideological extremes to defend their positions and then begin to speak from positions of those extremes. Such voters are unlikely to make a crossover. Parties are thus clearer about who will not vote for them.

It helps to thus win one side over completely. Demonising the other side helps in this complete win-over plan. Malviya talking about anti-CAA protesters helps him win over one side, instead of trying to win over a voter he knows would never vote for his party.

The voter's position in this game has moved from being the king to being the clown.

The 2019 movie Made In China best describes the current situation of the Indian voter. In a scene from the movie, Raghuvir (played by Rajkummar Rao), is asked by Tanmay Shah (played by Paresh Rawal), "Who is the customer?" Raghuvir promptly replies, “Customer is king”.

Shah then corrects him saying, “No, the customer is ch****a”.

Under this hugely democratised India, be prepared to see more Shahs think that of the voters.