Smoke in Punjab, fire in Delhi

The capital gets its collective guilt sorted by throwing the issue into the rural dustbin.

Delhi has been dreadfully angry. Punjab, they say, is misbehaving. Rural rustics are burning stubble despite regular warnings not to do so. Punjab, the national bread-basket, which the citizens of Delhi never got bored of repeatedly showcasing as the eternal signpost of green revolution during Republic Day parades through decades since Independence, is now being demonised. This is, however, understandable. The urban ego is hurt. The rural, after all, is not supposed to be rational. That the ordinary farmers of Punjab, already living on edge, can exercise the choice of minimising their agricultural input costs by burning stubble in absence of any viable alternative, is hard for Delhi to digest. My fleet of cars is a sign of development; your stubble burning is ecological havoc. Delhi thus nurtures its delusional hyper self; gets its collective guilt sorted by throwing the issue into the rural dustbin.

Much of the recent outcry in Delhi is symptomatic of how the urban has been traditionally conceptualised and imagined. It was the superior of the inferior other, the rural. Urban is modern, literate, progressive and developed, while the rural is regressive, rustic and retrograde. In the modernist fetish for binaries, Urban became temples while rural became sites of graveyard, of all that was considered unmodern. Therefore, rural essentially meant unhindered source of food with minimal maintenance cost. Rural folks, it is not without reason, are largely portrayed in Bollywood cinema as idealist, simpleton and minimalist, with an inflated altruistic self (remember Manoj Bharat Kumar?). 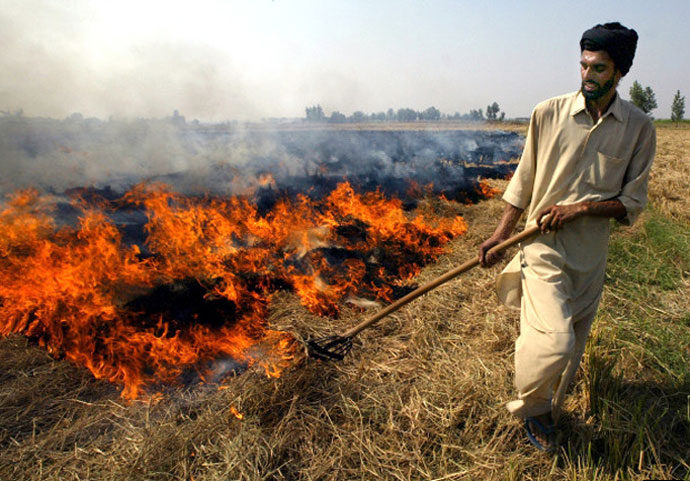 It is the nation’s turn to repay the debt of our much vaunted 'national bread basket'. Photo: Reuters

That explains why most rural development programmes, beginning with the Community Development Programme of the 1950s, have been high on moral trash and low in economic inputs. Much of our developmental emphasis and focus has been urban-centric. Just look at any indicator of public provisions since Independence, be it health, education, drinking water or infrastructure. The rural is relegated on all fronts.

Punjab is no exception. Perhaps it is the worst-placed. The burden of carrying the yoke of the victory narrative of the green revolution is proving enormously heavy, even suicidal, and that, too, literally. The sturdy shoulders of the “agriculturists par excellence” are looking saggy and sounding creaky. Indeed the green revolution gave the nation food sovereignty, but it broke the organic cycle of agriculture in Punjab. As mechanisation picked up, land got fragmented, input costs soared, water tables depleted, local labour force vanished, livestock disappeared and the young generation looked westward, the green fields of Punjab have increasingly been left to fend for themselves. The sheer hopelessness led to a virtual stampede of queer ideas invading the countryside.

Local moneylenders and rapacious marketing agents took charge as new dream merchants, selling half-truths about cash crops like cotton, only to be exposed by white fly pests, which destroyed not just the standing crop overnight but also pushed many families further into the debt trap, leading to many cases of farmer suicide. The sense that one gets in the villages of Punjab is one of utter confusion and anomie. As one octogenarian farmer recounted during one of my field visits, “Earlier there used to be one or two types of seeds or fertilisers and fungicides available, today there are half a dozen agents who come to us, each claiming to have the better product. We mostly have no clue about these claims. Small farmers in desperation fall prey to these agents and their spurious products.”

As Delhi seethed in anger in the wake of smog, I decided to go on a village visit with my students to Punjab. The atmosphere in the village was one of fear and confusion around stubble burning. The smaller farmers, and they constitute the majority, were a hassled lot, sandwiched between the government order prohibiting stubble burning and the local and immediate logic in favour of the practice as a cost-cutting measure. There was one stubble-clearing machine which was hired by the entire village, but it was proving expensive, time-consuming and was delaying the sowing of the next crop — adding to the anxiety of the average farmer.

At a get-together at a community centre in the village, at the end of the day, we heard farmers echoing a similar sentiment: kheti me to haalat maadhi hai ji, meaning agriculture is in a bad shape; a lost cause, if the government does not do something on an urgent basis. Roopinder Singh, 70, who was in the transport business and drove trucks from Madhya Pradesh all his life, now retired and settled in the village after getting his son well placed in an IT firm in Mumbai and a daughter married off and settled in Australia, said: “If you want to save the villages, get them connected to the market sans intermediaries. Potato is sold here at a farm price of Rs 5 per kg, by the time it reaches Delhi, it becomes Rs 50 per kg. Who gets the major share of this 10 times rise in price? The government will have to actively intervene, to ensure the farmers get the best price”.

In short, it is not just about the Minimum Support Price (MSP). Policymakers and planners need to grow beyond green revolution literature and reports of the '80s. To understand the second decade of 21st century rural India, the lens of the 20th century will need realignment and power refix.

The prognosis of Singh is nothing extraordinary. But is any one listening?

Sitting alone in the Delhi-bound bus for my return journey, I watched my young, vivacious students taking last minute selfies with the swathe of green fields in the background. Sending another reminder to them to get into the bus, I looked at the majestic setting sun with a mix of poignancy and hope - the former because of the history of our incorrigible neglect of the rural, and the latter because of my students, some of them I hope will carry the pangs of farmers to their dinner table discussion in Delhi; to tell that it is the nation’s turn to repay the debt of our much vaunted “national bread basket”.

Also read: Smog may seem invisible in Delhi, but the air is still poisonous

Post your comment
#Pollution, #Green Revolution, #Delhi Smog
The views and opinions expressed in this article are those of the authors and do not necessarily reflect the official policy or position of DailyO.in or the India Today Group. The writers are solely responsible for any claims arising out of the contents of this article.