Truth behind how demonetisation impacted jobs in India

How many jobs were created in calendar 2017? Mahesh Vyas, CEO and managing director of the Centre for Monitoring Indian Economy (CMIE), says 1.43 million. Surjit Singh Bhalla, a member of the Prime Minister’s Economic Advisory Council, says 15 million. A lively debate has arisen over these conflicting claims.

I spoke to Vyas to make sense of the dichotomy. The analysis that follows is based on the data spreadsheet Vyas sent me which contains detailed age group break-ups of those who are employed in the formal workforce.

In Vyas’ recent article in a daily (May 1, 2018), the numbers for only three age groups (15-24, 25-64 and over-65) were published. An analysis of a more detailed age break-up in CMIE’s spreadsheet throws new light on two key issues: One, how many jobs, and in which age groups, were created (and lost) in calendar 2017? Two, how did demonetisation affect job losses — and which age groups were most affected by it?

Demonetisation, however, struck hard at the 15-24 age group (a loss of 7.22 million jobs) and the over-65s (a loss of 3.18 million jobs). Together, the very young and the very old lost 10.40 million jobs in 2017, largely due to demonetisation. The loss nearly wiped out the gains in jobs (11.83 million) among the 25-64 age group which comprises the vast bulk of India’s formal workforce. The net gain in jobs in 2017 was thus pruned to 1.43 million. Without such large job losses among the under-24s and over-65s, job creation in calendar 2017 would have been significantly higher.

Now 15-19 year-olds are usually employed (as Mahesh Vyas agreed during our conversation) in low-paid jobs which require little education. Wages are usually paid in cash. Poverty drives teenagers to work rather than to study. It is this 15-19 age group with its approximately 6 million job losses (due largely to the effects of cash shortages following demonetisation in November 2016) that has skewed the job creation figures for calendar 2017. 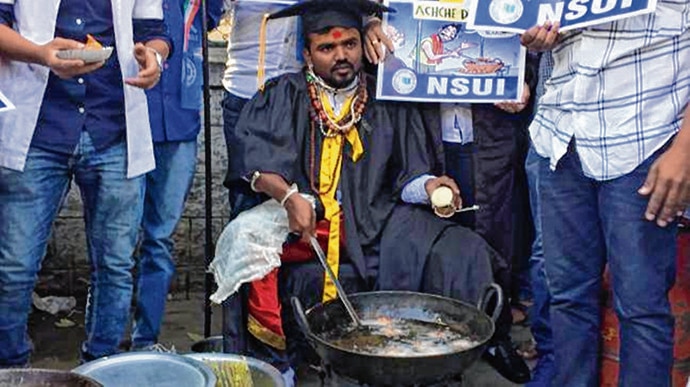 If we examine the total sample universe in the age group from 20 years onwards rather than from 15 years onwards by excluding 15-19 year-olds, the CMIE analysis looks very different: it reveals that an aggregate of over 7 million (6 million plus 1.43 million) jobs were created among those 20 years old and above right up to the over-65s. Why separate out the 15-19 year-olds from the analysis? Because those employed in the 15-19 year bracket accounted for just 14 million workers out of CMIE’s workforce base of over 400 million. Nearly half of these 14 million poorly educated youth (all teenagers) appear to have lost their jobs after demonetisation. Job losses in the 20-24 and over-65 age groups were far smaller. And in the key 25-64 age group, there was a large gain of 11.83 million jobs. The loss of jobs in both the 15-19 age group and the over-65 age group totals nearly 10 million (Photo: Reuters)

How quickly can jobs return to those in the 15-19 age group? Vyas says recovery is not yet discernible. It could be an important factor in the 2019 Lok Sabha election since many among the 15-19 year-olds will be eligible to vote. The loss of jobs in both the 15-19 age group and the over-65 age group totals nearly 10 million. These constitute among the lowest-paid jobs in the country. In contrast, the increase of 11.83 million jobs among the well-paid, professional 25-64 workforce (which accounts of 85 per cent of the total workforce) has ensured that the impact of demonetisation on the economy has been relatively modest – shaving around 1 per cent off GDP growth. GDP growth in 2017-18 is estimated at 6.6 per cent by the IMF, World Bank and Indian financial institutions compared to the 7.6 per cent growth predicted before demonetisation.

What next? To get job growth among the young rising again, the government must focus on vocational training, especially for those youth who have, for various reasons, been unable to complete their education. The Skill India mission is an important tool for this. Several corporates have adopted skilling workshops to upgrade employees into higher paid jobs. The Mudra scheme of providing small no-collateral loans to entrepreneurs could also be a game-changer if implemented well. It has the potential to be an employment force multiplier.

The fact that the 25-64 age group which comprises the overwhelming majority of the workforce created 11.83 million jobs is a healthy sign. It is by re-skilling the very young with little education but great untapped potential, who lost out after demonetisation, that could turn India’s jobs story around.

#Jobs Creation, #Unemployment, #Modi government, #Demonetisation
The views and opinions expressed in this article are those of the authors and do not necessarily reflect the official policy or position of DailyO.in or the India Today Group. The writers are solely responsible for any claims arising out of the contents of this article.