The whimsical decision on demonetisation that derailed the economy, hit traders and small entrepreneurs hard and brought a tsunami of pain and joblessness to millions of people also benefitted one - the BJP.

The gap between the ability of the two national parties to generate funds is staggering. The BJP alone managed to corner 66.4 per cent of the total income of national parties. In comparison, the rival Congress' share was a paltry 14 per cent.

This is the latest data compiled by Delhi-based Association for Democratic Report (ADR) based on Income Tax returns filed by political parties across the country.

The gap between the income of the BJP and the Congress can be understood in the context of their current size and the number of states in which each party is in power. The ruling party at the Centre followed by those in the states is best placed to maximise its clout and generate maximum resources.

In the same period, the BJP spent over Rs 606 crore on elections and "general propaganda" as against the Congress, which spent Rs 149 crore on election revealing the huge gap in resources between the two parties.

Let's put the question more bluntly. How come the war on black money, which Prime Minister Narendra Modi cited for issuing his "Tughlaqui farman" (whimsical order) on demonetisation allowed BJP to collect humongous amount of money that has no certificate of being "clean money"?

One needs to emphasise that most of the money collected by political parties is either through donations or contributions. And those are mainly from anonymous sources. Parties are not obliged to declare the names of donors and contributors for most of the funding they show as income.

BJP received a staggering Rs 997.12 crore of the total Rs 1,034 crore or over 96 per cent from donations and contributions during 2016-17. In contrast, Congress' main source of income amounting to less than Rs 116 crore came from issuance of coupons. 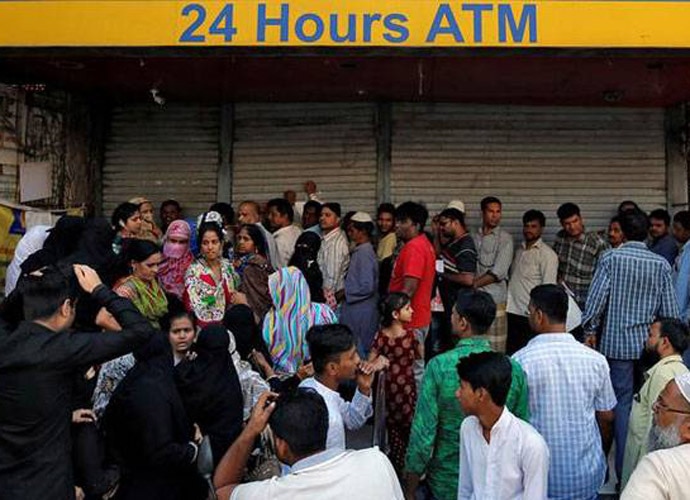 And therein lies the rub. Unknown sources of funding expose the failure of demonetisation and its avowed aim to flush out the black money from the system. The bulk of the hefty increase in the party income from mostly anonymous sources indicates a massive increase in the flow of black money to the BJP.

Since political parties don't come under the ambit of the Right to Information (RTI) Act, it becomes almost impossible to gather details about donations and contributions they receive from voluntary donors and other sources.

Though obliged to file ITR for tax exemption and provide income and expenditure data to the Election Commission, parties don't furnish details of voluntary contributions received. BJP, in particular, has been found to be avoiding disclosing details of donations.

For instance, an analysis of the data available indicates that in the period from 2012 to 2014, BJP didn't provide details such as names of donors or companies, who contributed to the party kitty in as many as 49 cases.

In the year 2010-11 and 2014-15, the party failed to furnish the address of almost 3,000 donors, who contributed Rs 390 crore to the BJP. Congress' returns and details of donors too are, insufficient, opaque and incomplete.

In view of parties' tendency to hide details of their sources of funding, ADR has been suggesting full disclosures of voluntary contributions to be made mandatory under the RTI Act. However, both ruling and Opposition parties are united in keeping the source of the funding hidden from public eye.

The question that arises that if demonetisation aimed to make the economy more formal and transparent through digitisation, why does BJP accept the bulk of its funding from anonymous donors? Why are political parties exempted from the rule that applies to every citizen and organisation?

Modi's so-called war on black money with noteban was also derailed with introduction of electoral bonds introduced in 2017. Issued by the Reserve Bank of India, bonds can be bought and deposited in the account of any political party in an authorised bank.

But there is catch. Donors' identity is kept secret. Finance minister Arun Jaitley's argument was that disclosing the identity of donors would open the doors for victimisation of donors by a political party that wasn't the beneficiary of donation or the party which received lesser donation from a donor than its rival through bonds.

Who is the donor and to which party the donor has contributed remains undisclosed under the new system. Even the Election Commission has been kept in the dark about electoral bonds of which political parties are beneficiaries.

Surge in the BJP's income in the post-demonetisation period speaks loud and clear about the failure of demonetisation and so-called war on the menace of black money.