Why Devendra Fadnavis is becoming BJP's fall guy in Maharashtra

Nowadays, Maharashtra Chief Minister, Devendra Fadnavis is paying the price for the deeds of others. Thanks to Bharatiya Janata Party president Amit Shah’s use of strong words against the ally on January 6 at Latur in Marathwada region, Fadnavis’ personal friendship with Shiv Sena chief Uddhav Thackeray is likely to take a beating.

“If the friend (Shiv Sena) is with us we will strengthen him. If not we will show him the earth,” Shah said addressing BJP’s booth-level workers. While the cadre responded to Shah in a rejoicing tone, it was an awkward moment for the CM.

Fadnavis has tried his best to maintain a healthy personal relationship with Thackeray over the last five years. His office doors were always open for Thackeray’s son Aditya – a staunch advocate of the robust nightlife in Mumbai. In turn, Thackeray refrained from making personal attacks at Fadnavis.

Fadnavis believes that the BJP could easily retain power in the state in an alliance with Shiv Sena. However, as its leaders have reacted angrily to Shah’s assault on the party, Fadnavis has been left with no option but to toe the party president’s line. He announced that BJP will contest 40 out of 48 Lok Sabha seats on its own, rubbing salt in Thackeray’s wounds. 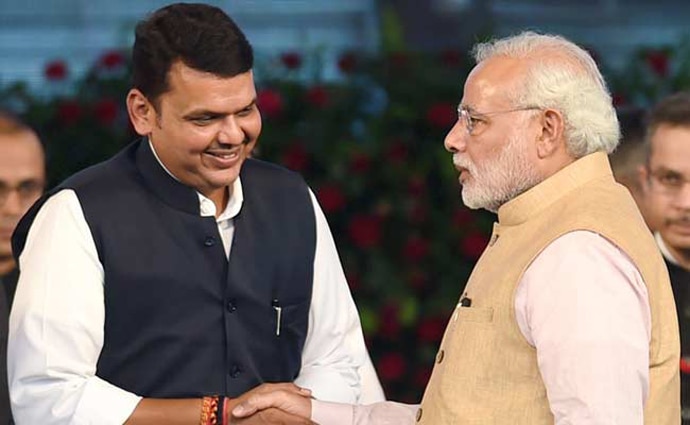 Around the same time, another controversy was brewing at Yavatmal in Vidarbha region as the organisers of Akhil Bharatiya Marathi Sahitya Sammelan (ABMSS) abruptly cancelled an invite to litterateur Nayantara Sahgal to inaugurate its 92nd literary meet, citing security concerns amid Maharashtra Navnirman Sena’s (MNS) call for protest. The author felt that the invitation was revoked because her speech at the meet, which was already out, was fiery enough to irk the government over the issue of freedom of speech, freedom to eat and the freedom to marry.

Fadnavis will be the chief guest at the event starting January 11.

Uddhav Thackeray also took the opportunity to blame Fadnavis, “The organisers must have felt that they may have to forego government considerations if she is called for the event. They have killed freedom of expression and self-respect of writers.”

Fadnavis clarified that the ABMSS is an autonomous body and it was the organisers’ call whom to invite or not and that the state government had no role to play in it.

Around 40 Left-leaning litterateurs are not in a mood to believe him. They have announced a boycott of the meet.