Riding Out The Storms: How Devendra Fadnavis transformed into a seasoned politician

He came out of the blue four and a half years ago. Now, his imprint on the Maharashtra BJP as well as governance in the state is unmistakable.

Maharashtra Chief Minister Devendra Fadnavis always acknowledges that the three biggest challenges during his tenure were related to the people’s sentiments and their livelihood. On all these three occasions — the Maratha agitation, the farmers' agitation and the Dalit protest — he felt there were attempts to destabilise him.

He faced the situations calmly though, kept room for dialogue and at times, took a lenient approach to allow these communities to vent their anger. As a result, he could score over his opponents — and he emerged as a stronger leader.

As he gears up to face his biggest political test, the state Assembly elections due in October, Fadnavis looks in complete control of the government as well as the BJP.

By winning 41 out of 48 Lok Sabha seats in the state, he has retained the trust of Prime Minister Narendra Modi.

But Fadnavis is quick to respond when pointed out that 41 is less than 61, the number of seats the BJP has won in Uttar Pradesh under CM Yogi Adityanath.

“My strike rate is better. The BJP contested on 25 seats. Out of that, we have won 23,” he says to me, emphasising how he is a performer in all adverse conditions. Political acumen is a natural gift for the Nagpur lad. He was absolutely correct when he apparently encouraged former Congressman Ranjitsinh Naik-Nimbalkar to defect to the BJP and fielded him from the Madha Lok Sabha constituency, which the BJP had never won before 2019. His other move, to replace the BJP candidate Smita Wagh with Unmesh Patil in Jalgaon on the last day of filing of nomination papers, also proved correct as Patil won the seat by a margin of around three lakh votes.

Fadnavis knew that the strength of the Opposition, the Congress and NCP, lay in the sugar mills of western Maharashtra — so, he apparently chose those politicians whose sugar mills were facing a financial crisis because of mismanagement, reportedly provided them with assistance and turned them to the BJP side.

Veterans such as Vijaysinh Mohite-Patil easily switched sides from the NCP to the BJP just before the election.

“Some more fence sitters will be on our side soon,” he claims now. 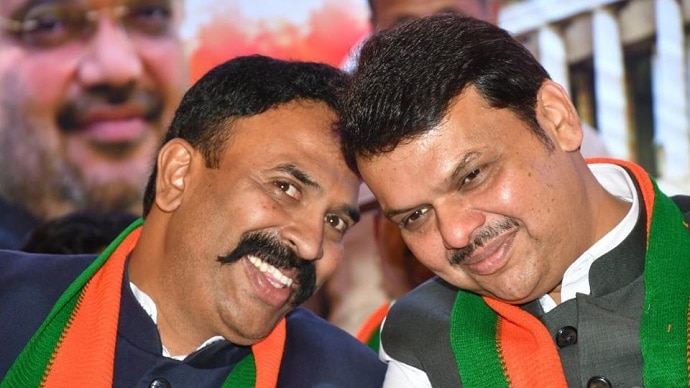 A Meeting of Minds? Ranjitsinh Naik-Nimbalkar left the Congress for BJP and was fielded from Madha Lok Sabha constituency by Fadnavis. (Photo: PTI)

However, the biggest hurdle in the smooth functioning of his government was the internal opposition from alliance partner, the Shiv Sena. Fadnavis always gave a patient hearing to Shiv Sena chief Uddhav Thackeray and his son Aditya whenever they wanted to discuss some issues. At the same time, he also came down heavily on Shiv Sena mouthpiece Saamna for its 'unwanted' criticism of the government. It sent out a clear message to the BJP cadre that the party was not in a mood to bow down to Shiv Sena pressure.

Political observers believe that Fadnavis will be in the driver’s seat as well when he negotiates seat sharing with the Shiv Sena because he has already demonstrated that his strategy works for the alliance.

We @BJP4India and @ShivSena do not Compete with each other but Compliment each other!At #PanchayatAajtak @aajtak pic.twitter.com/lxY8PK9app

The one thing Fadnavis lacked when he assumed office on October 30, 2014, was administrative experience. He has acquired this very quickly. First, he appointed experts in several fields to assist him in a system parallel to the government. Also, he created Key Result Areas (KRAs) for the bureaucrats and started evaluating their performance in a professional manner.

A story that is widely discussed in the corridors of Mumbai's Mantralaya is how Fadnavis apparently abruptly removed his reportedly favourite official Vijay Kumar Gautam, former Principal Secretary in the Ministry of Electronics and Information Technology. The move came after reports about goof-ups in the online submission of farmers’ information required to avail the loan waiver scheme started doing rounds in the media.

Fadnavis also shifted additional chief secretary Sudhir Shrivastava, known as the best official in the finance department, when he allegedly raised doubts on several clauses of the Mumbai metro contract, to the less significant transport department.

A senior official in Fadnavis’ office calls him a “no-nonsense boss” when it comes to performing. He is keen on getting feedback on various government schemes from his war room on a daily basis. “Whenever a politician or a bureaucrat enters his office, he can judge based on the person’s past for what reason he/she has come,” says the official.

When he became Chief Minister, Fadnavis’ detractors started speculating that the minority Brahmin in the majority Maratha state would not survive for long — he proved them wrong. His shrewdness and calm attitude towards his political opponents have helped Fadnavis remain untouched in the most turbulent political situation in the state.

His influence among BJP workers was recently felt at a wedding ceremony in Marathwada. A BJP official had invited Fadnavis as well as Women and Child Development Minister Pankaja Munde, who once reportedly said that she is the CM in the people’s mind. Munde reached the venue before time but Fadnavis got delayed because of his prior engagements. The BJP official, an ardent follower of Munde, chose to hold the wedding till Fadnavis arrived, around one hour late.

There are some flip sides too. Fadnavis attracted wide criticism when he said that some Maratha youth had planned to create a stampede if he visited the temple town of Pandharpur last year. Drifting from norm, he had apparently publicly snubbed Munde on Twitter for not attending an international conference. He was also accused of allegedly shielding a controversial official who has been supervising his dream project — the Nagpur-Mumbai Samruddhi Corridor. 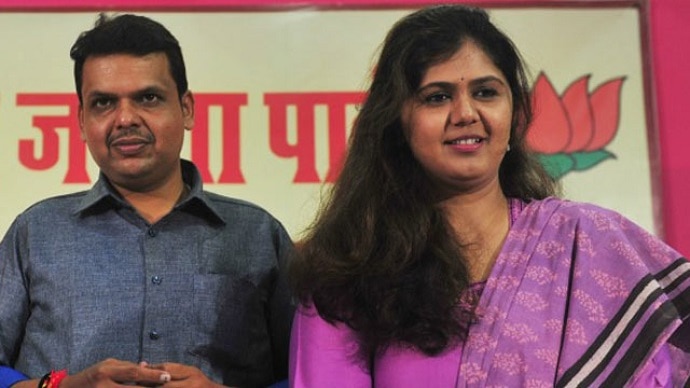 Thorny Lotus: Devendra Fadnavis and his cabinet colleague Pankaja Munde are often perceived as rivals to each other. (Photo: PTI)

However, Fadnavis is unmoved by all these charges.

“Every decision and its results have made me more mature,” he says. “There are people who will always point fingers at your intentions. I don’t get disturbed as I used to earlier. When I am doing it for a good cause and I have no ill intentions, then why should I worry?”

Clearly, Fadnavis has transformed into a seasoned administrator in four and a half years.