Four months ago, when a delegation from a south-east Asia country called on Devendra Fadnavis at Mantralaya to discuss investment opportunities in the state they were pleasantly surprised with the “impressive” presentation by the Maharashtra chief minister on the state’s improved industrial growth climate.

The delegation members talked about Fadnavis’ convincing skills for many days before they realised that their proposal of building affordable houses in the state has been facing several roadblocks because of administrative lethargy.

In the last year of his tenure, Fadnavis is facing a danger of fetching a bad name to his government because of several mismatches between his decisions and their implementations. Fadnavis lists out a dozen decisions and schemes of his government that will transform the rural and urban life in the state.

However, the officials in his office are worried that the government’s good work is not reaching to the people. “Why are we unable to reach to the people?” Ketan Pathak, an official with the chief minister’s office asked a BJP worker last month when they met at the party office bearers’ meeting in Mumbai.

The administrative lethargy has caused huge embarrassment to Fadnavis on the implementation of his two ambitious schemes. The state’s flagship scheme of creating micro-irrigation facilities, Jalyukta Shivar Abhiyan (JSA), has become a matter of court litigation.

Under this scheme, water resources are created locally through digging and widening streams, construction of cement and earthen stop dams and digging farm ponds. The stored water is used for irrigation purposes.

According to the data with Fadnavis’ office, the state’s agriculture production was 137.91 lakh metric tonnes (MT) in 2013-14 when there was 124 per cent rainfall. In 2017-18, the rainfall was 84.3 per cent. However, the agriculture production was 132.83 lakh MT. Similarly, in 2015, 6140 tankers were provided in water scarcity areas. This year, the number has drastically come down to 152. This could happen because of the increased irrigation and water storage. 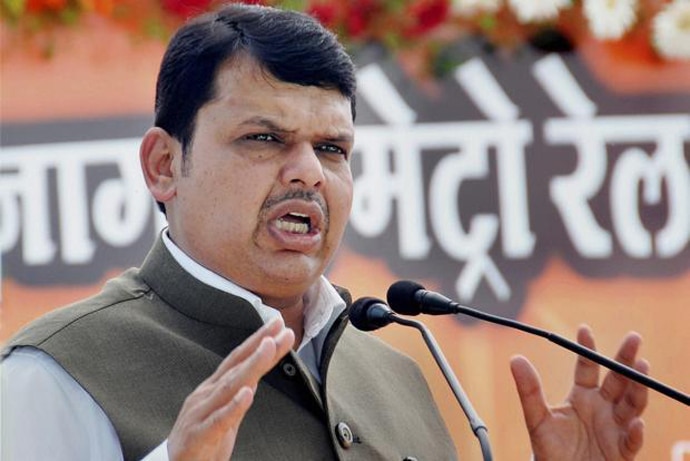 The government failed to reach out success of the scheme to the people. It did not release the statistics fearing a backlash as the JSA has landed in trouble after HM Desarda, an economist, challenged its genuineness in the Bombay High Court arguing that the scheme is being run unscientifically and that could mostly damage the ecological system.

He argues that scientifically a watershed is developed from the top of a mountain to the bottom. The government is doing the reverse. A committee headed by former chief secretary Johny Joseph studied the scheme as per the HC’s order. “The committee has made several recommendations pertaining to implementation of JSA but its mum on exploring other options underpins that there is some substance in the criticism about the scheme,” says water expert Pradeep Purandare, who retired from Aurangabad-based Water and Land Management Institute (WALMI) as a professor.

The poor administration has failed Fadnavis in winning the farmers even one year after he announced the “historic” loan waiver of Rs 1 lakh to 89 lakh farmers amounting to Rs 32,500 crore on June 30, 2017. Till date, only 37 lakh farmers have received the loan waiver. The scheme’s implementation has been slowed down because of the stringent norms such as linking the beneficiary account with Aadhaar and online processing system.

As if it was not enough several banks are delaying fresh loan crop to the farmers citing the technical reason that their previous loan is still not repaid. In June, The police and Yavatmal and Buldhana arrested two bank officials for seeking sexual favours from the farmers’ wives in lieu of disbursing loan crop. Fadnavis ordered an inquiry into the incidents but that has damaged his government’s image.

Fadnavis also stands accused of keeping a wrong company. His proximity with a legislator Prasad Lad, who joined BJP defecting NCP last year, gave the Congress an opportunity to point finger at his government’s alleged nepotism. Mumbai Congress president Sanjay Nirupam alleged on July 2 that the government, in an unprecedented speed, cleared transaction of 24 acre prime land in the vicinity of upcoming Navi Mumbai airport to two builders Manish Bhatija and Sanjay Bhalerao, who are apparently friends of Lad, at a throw away price of Rs 3.5 crore while its market price is Rs 1,767 crore.

The land was allotted on May 14 to eight people affected by Koyna dam project. They sold their lands to Bhatija and Bhalerao immediately on May 14 and 15. “The unprecedented speed in this sale deed is suspicious,” says Nirupam pointing fingers at the CM claiming that the transaction was cleared from his office.

The fact is, Fadnavis did not handle the case as it was done by the local Collector and Tehsildar. Clearly, the officials either kept the CM in dark or misled him on the transaction. Now, Fadnavis has stayed sale of the land and has ordered a judicial inquiry into around 200 land sale cases in last 10 years. It seems, keeping the CM in dark over serious issues is becoming a precedent. In June, the Pune Police arrested Ravindra Marathe, chairman of Bank of Maharashtra, for sanctioning loan of Rs 100 crore to a defaulter real estate baron DS Kulkarni.

As per the procedure, the police should have consulted the Reserve Bank of India before this action as Marathe is a chairman of a nationalised bank. The Pune Police did not take consent from Fadnavis, who also heads the home department. A furious Fadnavis lambasted at the police publically saying, “I am concerned over the manner Pune Police dealt with the case.”

It is an open secret that the bureaucracy defies Fadnavis on several matters. Recently, social justice minister Rajkumar Badole used harsh words for IAS official Ujjwal Uke, secretary of the department, for not acting as per his instructions. In another case, a senior BJP leader told Fadnavis in person that his principal secretary Praveen Pardeshi, another IAS official, tore a letter, signed by the CM.

In that letter, Fadnavis had instructed Pardeshi to consider the spokesperson’s request on a personal matter. On the third anniversary of his government in October 2017 Fadnavis had admitted that the bureaucracy did not listen to him. He has failed the change the scenario. “Fadnavis is securing out of marks in the political exam paper but he is barely clearing the administrative exam paper that too with many difficulties,” says political observer Praveen Bardapurkar in his blog.

While the bureaucracy is riding on him Fadnavis has hurt many BJP loyalists by awarding key positions to the leaders imported from other parties. In the last two month, four imported leaders were made public representatives. Vijay Gavit, who came from Congress, became Lok Sabha member from Palghar.

Ram Patil, Ramesh Patil and Nilay Naik, all original Congressmen, were elected unopposed to Legislative Council. These all were handpicked by Fadnavis. He has calculated political gains by inducting them into the BJP. He believes that these four can garner votes for BJP in the belt of Thane, Raigad, Nanded and Yavatmal that could help the party win at least 12 Assembly seats next year.

However, the move has left the BJP loyalists dejected. They have become like cheerleaders. Even if others hit the sixes they have to dance in celebration.

An officer on special duty in Fadnavis’ office Shrikant Bharatiya, a former organisation secretary of the BJP, bats for his boss. “It is a misconception that bureaucracy is mightier than the CM,” he says. “You are making an opinion sitting in Mumbai. If you out you will get the real picture.”

He also claims that the BJP workers are happy with the government. “We have told the workers not to come to Mantralaya for their personal works. Instead, they should help people solving their problems using their resources.” Bharatiya argued that it is obvious for the Opposition to make noise in view of the election next year. “I tell you. People are with us. We will win the next election with a bigger margin,” he says.