Fadnavis becomes longest serving non-Congress CM of Maharashtra: Can he win another term?

The CM has some factors going for him, but desperately needs a balancing act.

I vividly remember the day Fadnavis was chosen as the leader of the BJP legislative party. He was sitting in a room with the then-Leader of Opposition Eknath Khadse and BJP leader Vinod Tawde. When I reached, Tawde requested Fadnavis to talk to the waiting reporters for a while, and then rejoin their meeting. Fadnavis came out of the room with a broad smile on his face. He reacted to his elevation to the CM’s post in a politically correct manner. Towards the end of the interaction, I asked him, “How much do you remember your late father today?” This question got him emotional. He put his hands on my shoulders and said, “I lost him when I was only 17. I will try to walk on the path he had laid down.”

Today, Fadnavis is no longer an emotional being. He has acquired the identity of a ruthless and shrewd politician.

In the past four years, he has succeeded in establishing himself as one of the tallest BJP leaders in Maharashtra, on whom the party can rely for winning elections. He recently announced in Nagpur that he would be the CM for another five years.

Is this dream achievable?

Here are eight key factors that could decide Fadnavis’ fortunes.

One of the flagship initiatives of the Fadnavis government has been a micro-irrigation scheme called the Jalyukta Shivar Abhiyaan (farms full of water). The government claims that the scheme has been a great success, with around 6,000 villagers made free from water scarcity, and farmers getting adequate water for their crops.

The scheme does have the potential to change the state’s rural economy, and political equations as well. But at the same time, farmers are not too happy with the government’s agricultural policies. 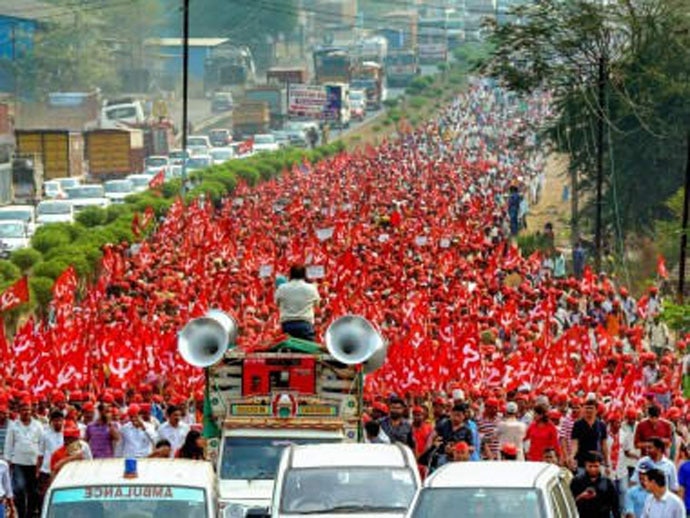 Red Surge: Despite several announcements by the government, the state has been rocked by farmers' protests. (Photo: PTI)

In what Fadnavis calls a “historic decision”, the state has so far spent around Rs 18,000 crore in waiving debts of 44 lakh farmers. While the government claims that transparency in implementation has ensured that only genuine farmers get the benefit of the scheme, farmers are demanding a more flexible market and adequate rates for their produce.

All three prominent communities in Maharashtra — the Other Backward Classes (OBC), the Marathas and the Scheduled Castes (SC) — have some or the other issues with the government.

While the Marathas are aggressively demanding 16% reservation in government jobs and educational institutions, the OBCs want their quota of 27% to remain untouched.

The SCs are demanding social security and appropriate representation in the government. 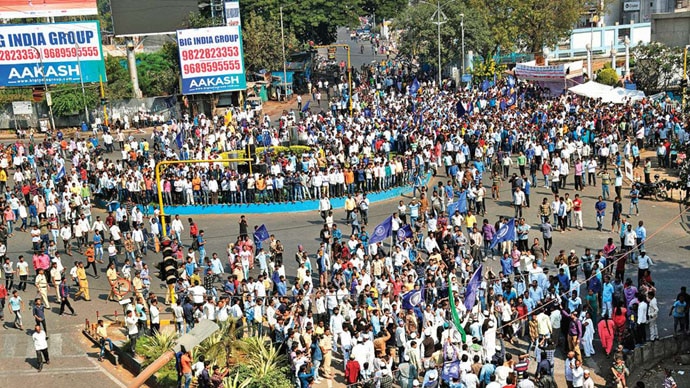 So far, Fadnavis has adopted a strategy of consolidating OBC votes. He has formed a separate department for them and announced several perks, such as hostels for students and a review of the reportedly small representation of the community in government jobs.

He has announced similar perks for the Marathas too.

Fadnavis has also focused on tribals — for whom 25 Assembly seats have been reserved. Also, they have up to 20% votes in another 20 Assembly constituencies. If Fadnavis could improve the BJP’s tally from 15 to 25 in these constituencies, his chances of retaining office would be bright.

Fadnavis’s thrust on creating infrastructure, in the form of new roads and metro rail corridors, will be the BJP’s trump card in urban areas. In the Mumbai Metropolitan Region (MMR) alone, where there are 63 Assembly seats, the wide metro rail network will be a huge relief for the city’s 1.20 crore daily commuters.

However, the pathetic condition of potholed roads, as well as traffic snarls in urban areas, will be reason too for him to worry. Urban voters will not take bad roads lightly. Metropolitian Enough? The Fadnavis administration has pushed infrastructure like Mumbai's metro network. But this has its own problems. (Photo: MMRDA)

That Fadnavis wants to be known as a ‘development man’ is evident from his pet project — the Nagpur-Mumbai Super Communication Expressway, popularly known as the Samruddhi Corridor.

The 710-km super-highway, which is to connect the state capital with its second capital, has been mired in controversies since its inception, due to stiff opposition from landholders. Fadnavis has claimed that the land owners’ opposition melted away after they were given compensation. However, nothing can be predicted till the work actually begins.

4. Poor state of law and order

In the past four years, Maharashtra has witnessed an average of 15,000 crimes per year against women. Around 3,000 girls are missing in Mumbai alone.

Significantly, the home department under Fadnavis failed to gauge the mood of the people ahead of the Bhima-Koregaon anniversary early this year, which led to violence. This particular riot will have a long-lasting impact on the state’s social fabric.

Fadnavis claims that the state’s crime detection rate has gone up from 8% to 40% in the past four years. However, his government has not been able to contain the rising graph of crimes.

In stark contrast to his image as a mature politician, Fadnavis has not been able to establish himself as a taskmaster when it comes to his administration.

The bureaucracy, especially lower-level officials, stands accused of not following their boss’s instructions.

That the administration is not doing its job well is evident from the huge crowds that gather at the Mantralaya every day.

If Fadnavis cannot get his administration in shape, he will have people blaming him for not doing enough for them, despite the sops he's offered various groups.

One factor working in Fadnavis’s favour is the weak Opposition that the Congress and NCP make up.

While the Opposition did raise several issues that could point to scams under the government, they miserably failed to capitalise on the explosive nature of the allegations. Meet The Opposition: Sanjay Nirupam of the Congress leads a lackluster charge against Fadnavis. (Photo: Twitter)

Also, Fadnavis is keen on inducting “influential” leaders from the NCP into the BJP. ‘Win at any cost’ is his formula for political maneuvering. The BJP exhibited in Dhule its power of breaking the NCP. Sources say that at least 20 local NCP councilors are in queue to join the BJP.

Fadnavis is on good terms with Shiv Sena chief Uddhav Thackeray, but his personal relationship is at stake over constant friction in the Sena-BJP alliance.

If Fadnavis can placate Thackeray, and have him firmly on his side, he will have an easier time in election rallies. Fadnavis and Thackeray are friends. But how many benefits does this dosti have? (Photo: PTI)

A major factor that will work either in Fadnavis’s favour, or the other way round, is the frustration among BJP workers.

These are the people who have kept patience for 15 years and worked very hard to expand the party in Maharashtra, but are now being neglected when important positions are allotted.

Fadnavis does not like the word “imported leaders”, but the fact remains that most influential positions have been grabbed by those who joined the BJP after it came to power in 2014.

If Fadnavis fails to contain this frustration among his party workers, his job in the next election will become much more difficult.