Anyone but Digvijaya: Why Sadhvi Pragya is in fact the Congress’ gift to Bhopal

Sadhvi Pragya was brought in only to answer Digvijaya Singh, and the Congress that had done nothing beyond ‘distancing’ itself from Singh’s controversial comments on Hindutva.

In 2013, Congress leader Digvijaya Singh hit controversy when he reportedly alleged that the Sangh Parivar trains its activists in making bombs. That statement was neither the first, nor the last from Singh — it was just one of the many statements Singh made insinuating at ‘Hindu terror’.

In 2011 too, Singh had accused the Rashtriya Swayamsevak Sangh (RSS) of running bomb-making factories. The statement came amid repeated assertions from security agencies that the bomb attacks which had occurred in Mumbai then could have been planned and executed by the Indian Mujahideen (IM). 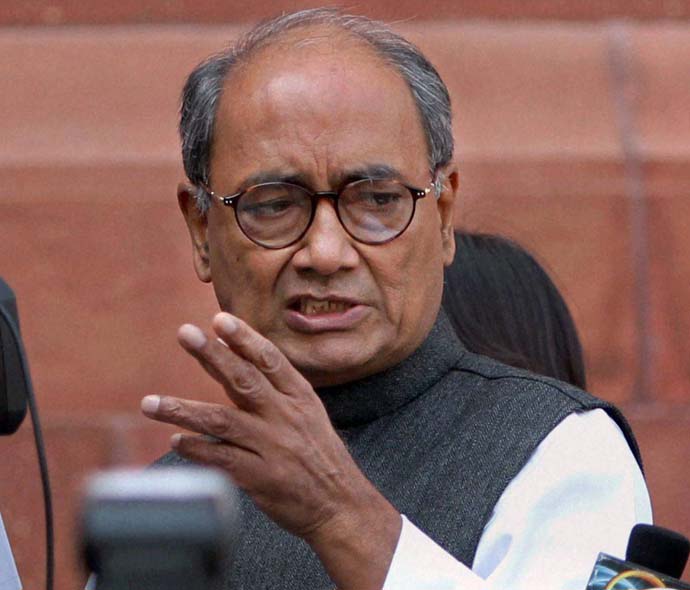 Singh, however, reportedly said, “I have been saying that RSS is spreading terrorism in the country and that it has been running bomb factories.”

Not only was Singh trying to blame Hindu nationalist organisations for apparently being involved in terror, he was also seemingly trying to say that Islamic terrorism was a myth.

Singh went on to call the 2008 Batla House gunfight a “fake encounter”.

In damage control mode, the Congress said that Singh was entitled to his opinion — the party, however, did add that it was not the party’s opinion.

Each time Singh made such controversial statements, the Congress did little beyond distancing itself from the remarks.

Now, such distancing can only be proverbial. When senior leaders of the party speak a certain language, it is taken to be the party’s language.

Sadhvi Pragya Singh Thakur was introduced into the electoral fray only to answer Singh — and the Congress that ‘distanced’ itself from Singh’s comments. Taking it head-on: The BJP answered Singh's attacks on Hindutva with some more Hindutva. (Source: Twitter)

The BJP knew Singh had riled the Hindu vote bank enough. Only the Congress didn’t know that fielding Singh from Bhopal — a BJP bastion and the RSS’ strong ground — would be like sending him into a lion’s den. Singh, on his part, didn't know that a 5kg chilli yagna may make the gods happy, but pleasing God's devotees is a different ball game altogether.

This was entirely of the Congress' choosing though. What choice did the BJP have when the Congress fielded a person who was seen largely as a man trying to attribute terror to Hindutva? Quite clearly — to field a person who, according to the people of Bhopal, was a victim of precisely those trying so hard to malign Hindutva.

The BJP answered Congress attacks on Hindutva — with some more Hindutva.

It is the Congress that started the game. The BJP used Sadhvi Pragya as its pawn to end that game.

The ‘Hindu pride’ that Singh had bruised was asserted, Bhopal overwhelmingly voting for Sadhvi. But the Bhopal vote is not as much for BJP and Sadhvi — as it is against Singh and Congress. Singh was clearly biased in his take on terrorism. And Sadhvi Pragya draws her real strength from Singh’s biases.

In that sense, she is Congress’ gift to Bhopal.

The BJP just acted as the delivery agent.