Didi Ke Bolo vs Dada Ke Bolo: Who is winning the battle for Bengal?

Trinamool’s Mamata Banerjee and BJP’s Dilip Ghosh are reaching out to people. But who exactly are the people listening to?

After Mamata Didi, Dilip Ghosh as ‘Dada’ is hitting the streets with his own ‘Dada Ke Bolo’ public interface programme.

Though both campaigns appear to be similar in form and name, a medium for airing grievances, they are as different in content as chalk and cheese. ‘Didi Ke Bolo’ is an exclusive helpline to record people’s grievances against Didi’s party and governance. But ‘Dada Ke Bolo’ is a direct interaction in an informal setting.

While Mamata’s campaign largely depends on the internet and Didi’s appointees handling it, Dilip dada is a flesh-and-blood direct, physical listener.

He is reaching out to people and inviting them for discussion, debate and dialogue over endless cups of tea and may be some smoke in his ‘chai pe charcha’ just like Prime Minister Narendra Modi. In the last two weeks he has been to Purba Medinipur, Bardhaman, North 24 Parganas and Kolkata districts. His experience has been bittersweet. 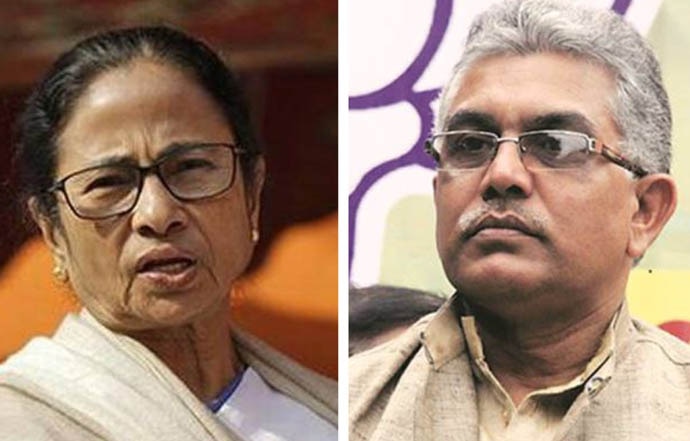 While Mamata Banerjee's outreach is driven by technology, Dilip Ghosh is giving it a personal touch. (Photo: India Today)

But Dilip, like an ace politician, is taking it in his stride. Confronted with “go back” slogans, black flags and heckling at Lake Town under Bidhannagar municipality, Dilip was in no mood to turn back. He said he was very happy to find so many Trinamool Congress (TMC) supporters waiting for him in the morning. “I walk in the morning and visit these areas and interact with the locals. But today I could see so many Trinamool supporters waiting to greet me,” he chuckled.

Later, however, he spoke to some people at a different location. Incidentally, that very morning TMC minister Sujit Bose, who’s not known to interact outside the party office, visited the same areas and interacted with party men.

Similar protests were held in Bardhaman. BJP workers accompanying Dilip retaliated and chanted Jai Shri Ram. Both the groups came to blows when the police intervened and led Dilip away.

Later Dilip told a party gathering that ‘Dada Ke Bolo’ has given some oxygen to the sinking TMC.

According to him, the resistance is isolated. People in general are sharing their problems and even discussing how even after trying for a month to connect to ‘Didi Ke Bolo’, things have come to a naught.

“We don’t believe in virtual world. For us everything is real,” said a BJP leader. “Even people are getting to see how TMC is engineering the protest and demonstration, pulling down hoardings buntings and breaking chairs and tables. The more people get to see their aggression, the better for us,” the leader added.

The decimation of space for Opposition politics, as seen in the 2018 panchayat polls, hurt the TMC in the Lok Sabha polls. “It will only prove that all this drama over Didi Ke Bolo and Didi’s olive branch to the Opposition parties are fake,” said BJP karyakarta of North Bengal, Diptiman Sengupta.

Also read: Why Mamata Banerjee's politics over Bengali language is a self goal

Post your comment
#West Bengal, #Trinamool Congress, #Mamata Banerjee, #Identity Politics
The views and opinions expressed in this article are those of the authors and do not necessarily reflect the official policy or position of DailyO.in or the India Today Group. The writers are solely responsible for any claims arising out of the contents of this article.