Diwali lights, and some dark, across South Asia

Among the many cultural specialties that the Indian sub-continent has, one is the diversity in celebrating a major festival. Diwali, the festival of light and happiness, is one such occasion that makes dissimilitude – diversity – felt. In India, it is intrinsically placed across communities – and makes its impact even beyond the cultural sphere.

Diwali reaches everything where money matters. So, the culture criss-crosses with materialism, money and the cycle of prosperity – this shapes the factors of celebration.

In Pakistan, Afghanistan and Bangladesh, the festival of light is celebrated in symbolic form by Hindus and Sikhs who happen to be living the existence of "minorities" there. Bhutan is relatively liberal and the Hindus living there celebrate Diwali to the fullest. 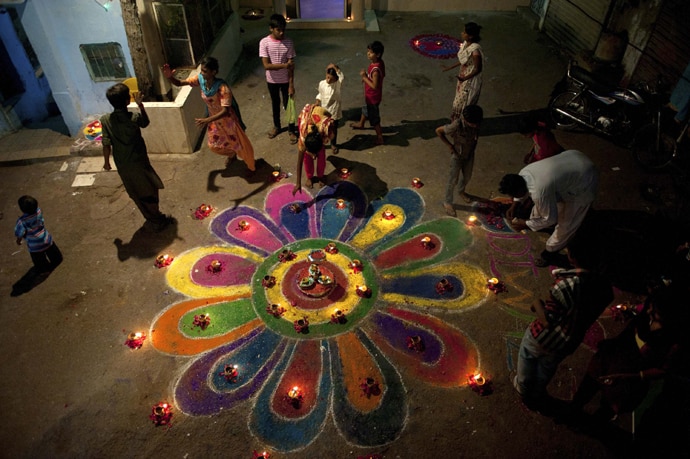 Hindus live in Pakistan too, but their Diwali is not as bright. (Photo: Reuters)

In Nepal, Diwali is celebrated by the name of "Tihar". The time between Dashain (Durga Puja) and Tihar is considered the most auspicious in the country; till a few years ago, when the monarchy was still surviving, there used to be long holidays to celebrate the festivals.

Diwali, as well as the following festivals for siblings, is celebrated joyously in Nepal. (Photo: Reuters)

In Nepal, the celebrations of Diwali or Tihar are most intricate and driven through historical tales and myths. Tihar is a five-day-long eventful affair, with each day dedicated to Kaag Tihar (Crow Puja), Kukur Tihar (Dog Puja), Gai Tihar or Laxmi Puja (Cow or Goddess of Wealth Puja), Goru Tihar, Govardhan Puja, Maha Puja or Aatma Puja (Ox Puja) and Bhai Tika, Bhai Dooj (festival for brothers and sisters).

This particular way of celebration is linked to Tihar’s mythological relation with Yama, the god of death, and his sister Yamuna. As per accounts of oral history, Yama had been staying away from his sister for a long time; Yamuna wanted to meet him, so she asked various sources to tell him to give her a visit. For that, she relied on a crow, dog and cow, and at the end, went herself to see her brother.

Upon meeting Yama, Yamuna worshipped him with Tika (five-coloured mark) and flowers. Yamuna made a circle with mustard oil, Dubo grass and put Makhmali mala, asking Yamaraj not to go till the oil, Dubo grass and the flowers got dry. Therefore, to date, every sister worships her brother keeping him in the circle of mustard oil, putting a mala (garland) of Makhmali flowers and Dubo grass.

In Terai, this is celebrated as "Diwali" and the Newari community calls it "Swanti", celebrating it uniquely. Since Tihar lasts for five days (Kartik Krishna Trayodashi to Kartik Shukla Dwitiya), it is also known as "Yama Panchak" (literally, five days of Yama Raj). On these days, believers do everything possible to keep Yama Raj happy, in the belief that "treating the soul" post the mortal existence is his prerogative.

Unlike India, where Diwali is celebrated with light and attributes related to the household and the material world, in Nepal, animals and birds, such as crows, dogs, cows and oxen are also worshiped for their symbiotic terms with humans. In Nepal, Animals and birds are also worshipped for their loving ties with human beings. (Photo: Reuters)

For the main Tihar day, this folk song aptly captures the essence of attachment the Nepalese have to this festival:

(Today is no moon day and Cow Puja and Bhailo day, the house is clean and you have done Laxmi Puja, today is cow Puja day and Bhailo)

On the Bhai Tika day, the Rani Pokhari Temple in Kathmandu is opened for those who do not have a brother or sister. Noticeably, on this day only, the temple is open to the general public. A fable tells us that during a ritual of "brother worship" the messenger of Yama Raj came to collect the soul of the man going through "brother worship". But to stop this, the sister kept performing "brother worship", and requested the messenger to wait until she completed.

Another story about the "brother worship" states that Yama Raj had five days off, as Lord Vishnu entrusted Bali Raja to rule the three worlds for five days. Yama Raj’s world was one of the three worlds. With having the luxury of time, he went to meet his sister, as it was pending for a long time.

Seeing her brother, Yamuna, Yama Raj’s sister, became so happy that she couldn’t manage just one way to welcome her brother whom she was seeing after a long time. She did everything possible thus to keep her brother happy and well-looked after for five days. While departing to his own world, Yama Raj reciprocated his sister’s warmth with a unique gift that set the tradition of "brother worship."

While these ancient practices are still rejoiced over for celebrating a fast-modernising and consumption-driven festival like Diwali, it is to be noted that India’s tryst with globalisation was not limited to trade only – it has had deep impact on other countries' cultural sides as well.

However, the irony is that countries like Pakistan and Bangladesh, once in the same cultural trajectory where India still is, are now bereft from an inclusive approach in treating Hindus and absolutely missing an opportunity to thrive through cultural reconciliation. Today, when we are celebrating the lights and the longing for happiness all around us, it would be worth giving consideration to the deep chasm created in South Asia's quest to end colonial rule and attain self-rule. The old mistakes are still defining our collective sphere, especially in India, Pakistan and Bangladesh.

For better historical reasons, Nepal and Bhutan are in a different league – and the way of celebrating the festival of light in both these countries are strikingly in sync with their independent past, normal present and a promising transition.