Why China's growing ties with Nepal should concern India

More needs to be done to strengthen bilateral relations between New Delhi and Kathmandu.

Nepali Prime Minister Sher Bahadur Deuba’s five-day visit to India last week assumed greater significance especially in the backdrop of the two-month-old Doklam standoff, which just got resolved yesterday (August 28). Wooed by both New Delhi and Beijing, the Nepali government made it clear that it wanted a peaceful resolution of the Sino-Indian military standoff. “Nepal does not want to be dragged into the boundary dispute between India and China,” Nepali foreign minister Krishna Bahadur Mahara said.

Mahara underlined China’s policy of maintaining equidistance by suggesting that “both of our big neighbours should maintain cordial relations through peaceful diplomacy and dialogue.” He was categorical, “We do not support any of our neighbours in this case.”

Not only Beijing and New Delhi stepped up their diplomacy to engage Kathmandu at this crucial time, the Nepali government too was concerned by China’s attempts to bring other disputes such as Kalapani into the equation in order to justify its actions at the India-Bhutan-China tri-junction.

Wang Wenli, deputy director general of the Boundary and Ocean Affairs of China’s Ministry of Foreign Affairs, suggested, “The Indian side has also many tri-junctions. What if we (the Chinese) use the same excuse and enter the Kalapani region between China, India and Nepal or even into the Kashmir region between India and Pakistan.”

External affairs minister Sushma Swaraj was in Kathmandu recently, ostensibly to attend the Bay of Bengal Initiative for Multi-Sectoral Technical and Economic Cooperation (BIMSTEC) ministerial meeting. But her engagements with the Nepali government became the focus of her visit.

Nepal has benefited tremendously from its "historic" ties with India and it seeks to further strengthen its bilateral relations with New Delhi, Prime Minister Deuba said even as Swaraj underlined that India attached the highest priority to its relationship with Nepal.

Meanwhile, China is also reaching out in a big way. Chinese vice-premier Wang Yang was in Kathmandu recently with a big delegation to get a sense about the Deuba government’s inclinations. Beijing has pledged $8.3 billion (Rs 53,000 crore) to build roads and hydropower plants in Nepal even as Indian commitments remain in the realm of $317 million (Rs 2,000 crore).

As part of its ambitious "One Belt, One Road" initiative, Beijing is looking into the possibility of connecting Kathmandu to Lhasa in Tibet via railways at an estimated cost of $8 billion (Rs 52,000 crore). China’s activities have been steadily expanding in Nepal after Kathmandu’s support for OBOR materialised. This happened despite India’s stiff resistance to OBOR. 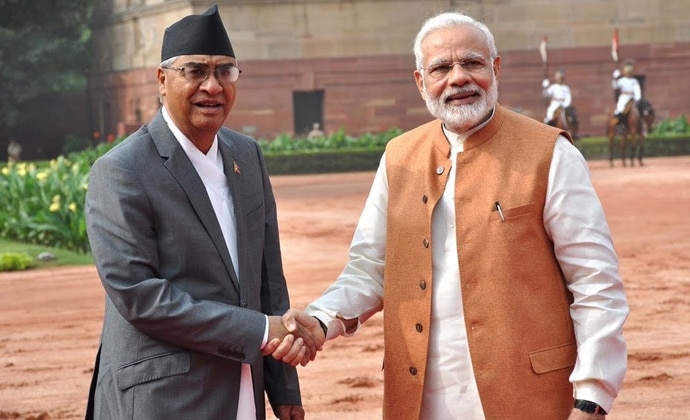 The blockade along the India-Nepal border due to the Madhesi crisis has angered a large part of the Nepali population, allowing China to step in as an alternative to India by providing not only the internet but also alternative trade routes. Nepal’s economy is ailing since the earthquake of 2015 and its reliance on aid and remittances remains at an all time high. China’s attraction under such circumstances is quite natural.

Deuba’s visit to India last week was another opportunity to bring Indo-Nepali relations on an even keel. The Modi government has started off in 2014 by investing significantly in this vital relationship. But it has struggled to revitalise bilateral ties with Nepal. Deuba’s visit also focused on issues like the execution of the decade-old Mahakali Treaty, a memorandum of understanding on reconstruction projects in Nepal, enhancing cross-border connectivity and expeditious completion of India-funded projects.

India’s inability to execute projects it has taken up in its neighbourhood has become a big problem for its allies as well as for its own ambitions to emerge as economic guarantor in the region. It dents New Delhi’s credibility and China, by often implementing projects on time and schedule, presents itself as a more credible partner. It should, therefore, be no surprise that India’s smaller neighbours often seek out China’s support despite India’s discomfiture.

India’s obsession with Pakistan has also meant that policymakers in New Delhi often take their eyes off the ball. Pakistan is a problem and has always been one but increasingly it is a problem of managing negative externalities emerging out of Pakistan’s domestic dysfunctionalities.

But China’s growing role in the region means that India cannot be ad hoc and episodic in its dealings with its smaller neighbours. After all, they are India’s first line of defence against a Chinese onslaught. With Nepal in particular, India’s cultural and social connect has at times resulted in New Delhi taking the country for granted.

Nepal, like most regional states in South Asia, has tried to use to both India and China to pursue its interests. There is nothing new or controversial in this. What should be of concern to India is that despite New Delhi’s best of intentions, it has been unable to assuage Nepali concerns about India’s attitudes and has not been able to implement its long-promised projects in the country. And this has resulted in China expanding its footprint in the Himalayan nation. The Doklam standoff may be over, but it has made this reality clear for New Delhi.

#One Road, #One Belt, #Ties, #India
The views and opinions expressed in this article are those of the authors and do not necessarily reflect the official policy or position of DailyO.in or the India Today Group. The writers are solely responsible for any claims arising out of the contents of this article.