Pay no heed to Donald Trump’s gaffe over Kashmir issue

Trump’s comments should be ignored with the contempt they deserve and New Delhi should move on to more important matters.

It will all be forgotten in a few days and won’t even get the mention of a footnote but when it happened all hell broke loose. During the visit of Pakistani Prime Minister, Imran Khan, to the US, President Donald Trump unexpectedly, and rather dramatically, offered to “mediate or arbitrate” the Kashmir dispute which led to screeching headlines and political upheaval in India. 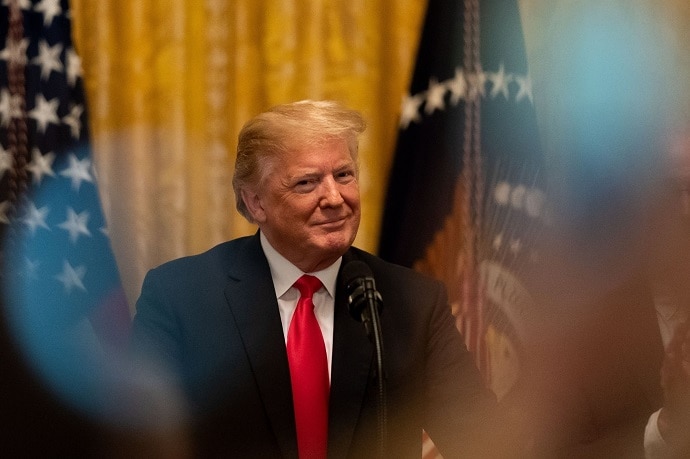 President Donald Trump sure knows how to grab headlines across the globe. (Photo: IANS)

This would have genuinely come as a shock to many in India as it reverses the decades-old US policy of viewing the Kashmir dispute a bilateral matter to be resolved between India and Pakistan, in sync with Indian sensibilities. Though all American Presidents, including Barack Obama, have been tempted to wade into the Kashmir dispute every now and then, it is now well understood in Washington that this is a no-go area for the US if it wants ties with India to grow and mature. So, what prompted Trump to say what he said remains a matter of intense speculation in India? One can weave in all kinds of conspiracy theories, but the reality remains that it is very difficult to figure out what Trump is thinking most of the time on serious matters of geopolitics. If his own state department finds it difficult to navigate his thought process, India has a very difficult task at hand.

But given the political sensitivities involved, India’s response was quick and robust. India’s ministry of external affairs tweeted “We have seen @POTUS’s remarks to the press that he is ready to mediate if requested by India & Pakistan, on Kashmir issue. No such request has been made by PM @narendramodi to US President. It has been India’s consistent position that all outstanding issues with Pakistan are discussed only bilaterally. Any engagement with Pakistan would require an end to cross-border terrorism. The Simla Agreement & the Lahore Declaration provide the basis to resolve all issues between India & Pakistan bilaterally.”

The Indian response basically made it clear that the US President was lying on this issue. This was followed by the Minister for External Affairs S Jaishankar’s remarks in the Rajya Sabha in which he reaffirmed that no such request has been made by the PM. And, in response to a formal protest from New Delhi, the US State Department also tried to do some damage control by underlining that the Kashmir dispute was a “bilateral” issue between India and Pakistan and that the US “welcomes” the two countries “sitting down” for talks. It added that Pakistan taking “sustained and irreversible” steps against terrorism is key to a successful dialogue with India.

Kashmir is a sensitive subject and Indians rightly expect their partners to be sensitive to India’s core interests. But overanalysing Trump’s behaviour might be a fool’s errand. He has been a highly disruptive President and has been unconventional in his approach. His tirades against some of America’s closest partners have made the job of US diplomats difficult. So, instead of jumping to conclusions, New Delhi should wait and watch if there is a pattern emerging in Trump’s behaviour on Kashmir. If there is, then India will have to re-strategise but if not, there is no point wasting so much energy on a non-issue. Significantly, the joint statement issued after the Trump-Khan talks at the White House does not mention Kashmir.

India’s push back has been solid. America would have got the message that they need to course-correct and that’s what they have been trying to do since Trump’s remarks. There are much bigger issues on the US-India bilateral agenda that need sorting out. From trade to Iran, from the S400 deal to 5G, the two nations need to talk more substantively to arrive at mutually desirable outcomes. In fact, the rapidly evolving situation in Afghanistan should be a greater cause of concern in the context of Khan’s visit to the US and Trump’s demand that Pakistan “help us out to extricate ourselves” from Afghanistan.

The Kashmir dispute has lost global resonance and it is hypersensitivity in certain sections of the Indian polity that might bring it back on the global agenda. If India staved off efforts by the world’s mightiest powers to intervene in the dispute in the past, when it was marginal in the global power hierarchy, as a nation we should have greater confidence in our ability to manage Kashmir today when we are moving towards a $5 trillion economy. Trump’s comments should be ignored with the contempt they deserve and New Delhi should move on to more important matters.

Post your comment
#S Jaishankar, #Kashmir intervention, #Imran khan naya pakistan, #Donald trump narendra modi
The views and opinions expressed in this article are those of the authors and do not necessarily reflect the official policy or position of DailyO.in or the India Today Group. The writers are solely responsible for any claims arising out of the contents of this article.