The 45th POTUS’ alt-fact universe keeps getting exposed because the president braves unscripted questions. Our prime minister does not.

Donald Trump has been rightly ravaged on mainstream and social media for his Thursday “anti-press conference”, which he used to tell the US media point-blank that they are the bad guys. For example, he claimed that his electoral college margin, at 306, was the biggest since Ronald Reagan. He was quickly corrected in that very press conference. No his wasn’t. His predecessor, Barack Obama got higher EC votes both in 2008 and 2012. President George HW Bush got even higher.

President Donald Trump is corrected by NBC reporter after falsely claiming he had the biggest electoral margin since President Reagan. pic.twitter.com/a7K16mU0Pc

President Trump’s claim that his administration is running like a “fine-tuned machine” was also contradicted. Then and there. For example, even the cabinet is not in place. There’s been a fresh controversy over Russian links almost every day.

Fact-corrected, and humiliated, stands Donald Trump. But let’s be honest. The guy, delusional and completely out-of-whack though he is, at least has the gumption to face the very press he loves to berate. He calls them “fake news”, but in their face. He calls them the bad guys in front of them.

There lies the difference.

In India, the best our high-octane media has managed to obtain are a couple of long and extremely monotonous, tightly-controlled, entirely scripted interviews with Prime Minister Narendra Modi, that too in lieu of air time to particular campaigns, ideas etc to benefit the owners of those channels.

Except for a townhall with Facebook chief Mark Zuckerberg, PM Modi hasn’t brooked questions on Indian soil. He has however taken a joint press conference with former UK prime minister David Cameron, where a BBC journalist flummoxed him with a difficult question. Modi’s answer was found to be inadequate, evasive. 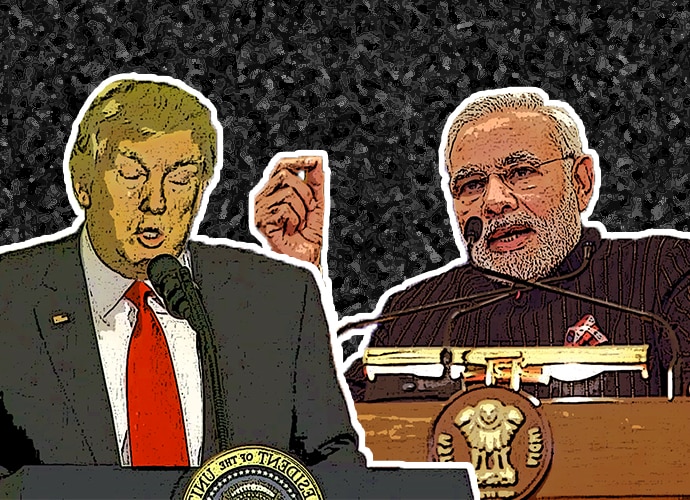 Why doesn’t PM Modi do press conferences at all? Like President Trump, PM Modi was one of the first elected leaders to betray a keen fear of the liberal media, and his party has become synonymous with a factory of online of troll who abuse and threaten journalists on social media as a modus operandi. Modi’s suspicion of liberal media is as deep-rooted as Trump’s, but unlike the latter, India’s prime minister does not face the head-on.

So much journalists here can learn from the American media on asking tough questions. Also credit to Trump for holding press conferences

Trump might inhabit alternate reality, but he's still taking press conferences. When was it that India's current PM had an un-scripted PC?

Instead, PM Modi relies on soft press he gets from a number of right-of-centre newschannels, digital portals and opinion websites that openly trumpet “pro-military, pro-nationalist” credentials. PM Modi is never seen in a non-controlled situation, he always speaks from a pedestal, prefers virtuoso performances and high-voltage electoral campaign rhetoric over speaking in Parliament, as he ought to as an MP.

Will PM Modi be ever fact-checked the manner in which Trump was? When is Modi conducting his first press conference as the Prime Minister? pic.twitter.com/2YMFwRdYtU

Already looking forward to a joint Modi-Trump press conference where Modi calls him by his first name. Remember "Barack..."

What is PM Modi afraid of? Shouldn’t he expose the liberal media’s “anti-Modi bias” by dutifully and responsibly taking on their questions, and answering them all, without scripting the whole thing to look favourable?

Shameful behaviour of Trump 🆘Is that way to talk/treat a Journalist ?And yes, when's Modi taking tough Questions in Press Conference ? https://t.co/rSVWESbnKJ

It’s easier to lampoon Donald Trump sitting in air-conditioned newsrooms of New Delhi and Noida. It’s tougher to emulate the journalists who are holding President Trump to account at every point, fact-checking on real time, and not retweeting bigotry spewed from the troll factory that BJP’s IT cell maintains when it’s not selling out state secrets to Pakistan’s dreaded ISI.

It’s important to face the elephant in the room. When will Prime Minister Narendra Modi really hold a no-holds-barred press conference? Until journalists demand that, we should take their ridicule of Trump with sacks of the common salt, preferably iodised.