Why Trump is good for Modi (according to Modi himself)

Our PM has, unfortunately, positioned India in the opposite side of the democratic progressive forces.

Donald Trump has only been the president of the United States of America for two weeks, but has given enough reasons to the world for alarm. Unlike his predecessors, Trump does not intend to lead the free world; rather he has proudly assumed the leadership of a hate-filled authoritarian movement fast spreading around the globe.

Without waiting for legislative approval, President Trump has brought many significant changes in the US government policy exercising his power through unilateral executive orders. He is running his presidency in unprecedented haste and thoughtlessness.

The despair among the progressives and liberals all over the world in the days following the US presidential election has now turned into fear and outrage. Before Donald Trump’s inauguration many had hoped that he might not have meant all his electoral rhetoric, but now there is no doubt that he meant it all along.

In the last two weeks, Trump has reinstated a ban on providing federal grant to international groups that support abortions, killed the Trans-Pacific Partnership trade deal among 12 Pacific Rim countries, waged a war on Environmental Protection Agency, unilaterally declared to build the border wall with Mexico, prohibited citizens of seven Muslim countries from entering the US for 90 days and refused to accept any refugee for 120 days. 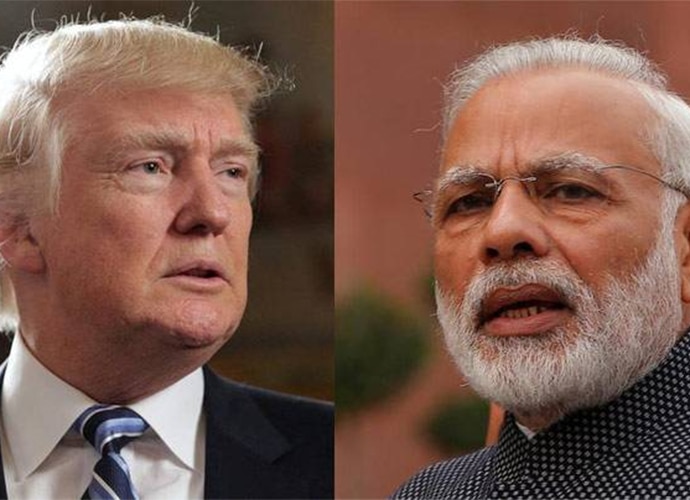 Similar to Trump’s “America First” magniloquence, Modi has coined his “India first” to describe the core of his foreign policy agenda. [Photo: Indiatoday.in]

Millions of women across the globe demonstrated against Trump only a day after his inauguration to protest against his anti-female policies and his disparagement of women and minorities. However, the political leaders from all over the world also have come out now openly with their criticism, when Trump signed an executive order on January 27, 2017 imposing temporary travel ban on citizens of seven Muslim-majority countries.

Not only the leaders of Islamic countries like Turkey and Pakistan, but also of Britain, France, Germany and Canada came out openly criticising the policy as divisive, discriminatory and illegal. Even Australia, which had avoided the public criticism of refugee and travel ban policies, has taken up the issue forcefully when Trump had his first telephonic conversation with its prime minister. Secretary General of the United Nations has also openly rebuked Trump by saying his policies are “against the fundamental principles and values on which our societies are based”.

India under Narendra Modi, unlike other democratic progressive countries of the world, instead of opposing Trump’s draconian travel ban on a selected group of Islamic countries, is even hopeful of the ban to extend to Pakistan as well. Trump and his regressive policies not only affect international travel and protection of refugees, but also create dangerous challenges for protection of human rights and arresting the climate change.

India’s foreign policy, since its independence has been defined not merely by national interests, but also by the basic human values and principles. India has been victim of colonialism and racism for about 200 years and has been opposing these evils anywhere in the world even with great economic and political costs. Empathy and solidarity with poor and developing countries has been one of the cornerstones of India’s foreign policy and that has helped to provide the country a higher moral pedestal in the community of nations.

However, under Narendra Modi, India has drifted away from that foreign policy mooring provided by country’s first Prime Minister Jawaharlal Nehru. Similar to Trump’s “America First” magniloquence, Modi has coined his “India first” to describe the core of his foreign policy agenda. Thus, Trump’s anti-Islamic rhetoric and pro-Hindu statements have kept Modi’s India hopeful of an improved relationship with the United States and to ignore the global sentiments. Even when Trump walked out on the Trans-Pacific Partnership Deal, India under Modi has started to see the benefits for its own export industry, particularly in apparel and pharmaceutical sectors.

The potential change to the H-1B visa programme supporting Trump’s policy of “America first” has brought some uneasiness to India. The $150-billion Indian outsourcing companies are the major beneficiaries of this visa programme, which annually allows 85,000 foreign professionals to work in the United States for a three-year period. Though American Congressman Zoe Lofgren has already tabled a bill to reform the H-1B visa programme in the House of Representatives, India under Modi has refrained from being openly critical, instead is working together with Trump administration to get some concessions.

While other global leaders openly criticise Trump’s politics and policies and the popular movement against Trump has become truly global, Narendra Modi takes pride in connecting with him saying that both of them are targeted by the establishment because of being outsiders. It is true that there are many similarities between Donald Trump and Narendra Modi.

Modi, similar to Trump or even more, is charming, charismatic, and cunning and at the same time extremely self-absorbed and possess a huge lust for power. Modi has already completed half of his present tenure as the prime minister of India. In this time period, India has witnessed Modi’s utter disregard for human rights, crude use of state machinery for censoring critics, trying all the tricks to undermine the independence and power of judiciary, and using both state machinery and Hindutva foot soldiers to suppress religious freedom. What Trump is doing now, Modi has already been doing it for nearly 33 months.

Modi can never imagine to criticise Trump over his travel ban for Muslims as his own government is in the process of passing a bill in Parliament, which aims at discriminating Muslim refugees arriving from its neighboring countries. Similarly, for Modi to criticise Trump for his threat to build the border wall with Mexico, he needs to have some answer to explain his own months-long blockade against Nepal in 2015-16, which brought immense hardship to that country while it was trying to recover from a devastating earthquake.

If Trump can be blamed for committing a diplomatic hara-kiri for withdrawing from the Trans-Pacific Partnership trade deal, Modi has done the same by signing Logistic Exchange Memorandum of Agreement (LEMOA) with the United States and destroying the bedrock of India’s foreign policy of 70 years.

It is another matter, Trump has won the election on promising what he is doing as president, while Modi has come to power saying something very different than what his policy priorities have been as the prime minister. The other difference between Trump and Modi is the scope of the impacts of their narrow-minded policies. While decisions of Trump have the global ramifications, Modi impact is mostly limited to India and its neighbourhood. However, the extent of miseries Modi has inflicted on common Indians with his whimsical decision on “demonetisation” probably Trump will never dare to go to that extent. Hopefully not.

Thus, Narendra Modi neither has the gumption nor inclination to side with the world leaders and global opinion and stand up to Donald Trump. Rather, he sees Trump as his “soulmate” and decides to side with him instead. That has unfortunately positioned India in the opposite side of the democratic progressive world.

#Demonetisation, #Muslim Ban, #Narendra Modi, #Donald Trump
The views and opinions expressed in this article are those of the authors and do not necessarily reflect the official policy or position of DailyO.in or the India Today Group. The writers are solely responsible for any claims arising out of the contents of this article.