India should ignore the USA: For when Trump blows his own trumpet, he is usually out of tune

No matter who says so, there is no urgency for us to talk to a neighbour who does not believe in behaving like a neighbour.

Forgive him, Dear Lord, for he knows not what he says. President Donald Trump's comments about Prime Minister Narendra Modi having asked him to mediate in Kashmir would be funny, were it not such a serious matter and a grave untruth. It is unconceivable to most minds that Modi would ask Trump to help commence talks with Pakistan, especially when the Pakistanis have been literally begging India to start the talks.

On the other hand, when Trump says, at the same venue, that he could wipe out another country whose people have not harmed his country, that he could take 10 days to do it and kill 10 million people in the bargain, is very, very frightening.

WATCH: President Trump says that he could win the 18-year Afghan War in 10 days, because he has plans that could wipe Afghanistan off the face of the Earth and kill 10,000,000 people, but "I don't want to go that route." pic.twitter.com/IftsRmBjpG

If it is Afghanistan today, it could be any other country tomorrow.

Consider what else he said — he said he wants Pakistan's help to extricate America from Afghanistan. The exact words were: “I think Pakistan’s gonna help us out to extricate ourselves.” Now, 'extricate' could also mean bail out, liberate, rescue or disentangle.

Pakistan's help is required from a situation that Pakistan first exacerbated for the US all these 18 years by constantly double-crossing and milking the Americans. The US knowingly paid billions of dollars for sustaining an insurgency that hurt the Americans and the neighbourhood. Or maybe, it did not really hurt all that much for most of the billions went back to American companies providing logistics for troops.

A superpower that now seeks help to be extricated by a country that is going around the globe with a begging bowl is no longer a superpower — and is tantamount to defeat.

In return for all this, Imran Khan turned the knife a bit when he later told Fox News, "And yet it was the ISI that gave the information which led to the location of Osama bin Laden." In other words, the Inter-Services Intelligence (ISI) turned the screw on the man they had sheltered for six years and sent him to his death. There must have been a bargain here. General Ashfaq Parvez Kiyani was the Army chief and Lt Gen Shuja Pasha, his ISI chief.

Barring one reasonable comment from the Congress that came from Shashi Tharoor that he did not believe Trump's statement, the rest of the leaderless pack demand that Narendra Modi tell them the 'truth'.

All of a sudden, the brigade that was for peace talks and brotherly love wants to know if we are negotiating with Pakistan in Kashmir. Clearly, hatred for one man and the ignominy of a defeat still rankles so they are willing to raise questions on the basis of comments by a man known to be flexible with truth.

Maybe Trump is pushing India on the S-400 missiles or Iran issues, so this late discovery of equivalence on the India-Pakistan issue to pressure us further. For India, there can be no bargain on any of these issues of national security and essential strategic needs. A nation that has lately been lauded as almost an ally and nations that have some self-respect cannot be treated in this peremptory manner. 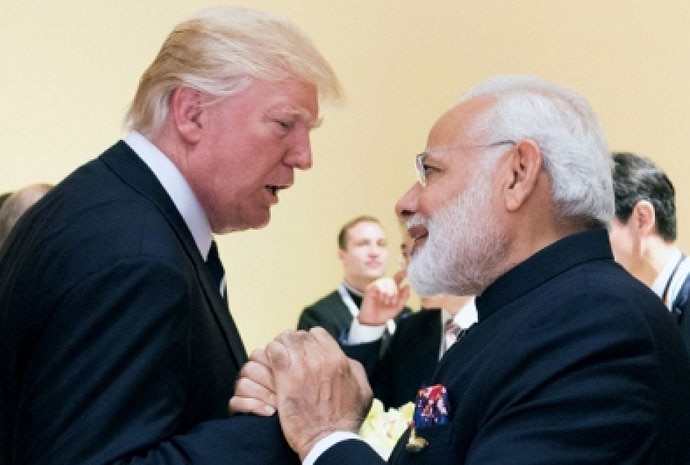 In happier times: With his re-election approaching, has Donald Trump got new friends? (Photo: IANS)

Besides, Trump has to show some foreign policy success soon enough because it is getting close to election year.

Afghanistan is one problem that he could 'solve', bring the boys and girls home and claim success. Taliban intransigence is probably adding to his frustration. So maybe, Trump was advised to make some gesture on Kashmir to Imran Khan that would please General Qamar Javed Bajwa, save Khan's job and get Pakistan to talk to the Taliban to relent.

A few aspects of the Kashmir issue need to be repeated to jog one's memory and context.

It would help if we stop being defensive and delusional about what we have on our hands.

Kashmir, all of it, belongs to India. It will stay like that, now and forever.

The problem in the Valley of Kashmir is not a freedom struggle. It is a jihad launched by the Pakistan Army. For years, it has been fought on ground rules laid by the jihadists at Pakistan's behest because we did not have a consistent policy. Talks without overpowering violence never succeed because the terrorist assumes he has won — just as the Taliban are treating the US currently. We have often lionised terrorists from Pakistan or those trained by them. This must stop; there are no brownie points for this but it actually works against us. We are taken as a soft state.

This creates a false narrative because of political opportunism, vested local interests, dreamy eyed opinion-makers and irresponsible media. All these factors aggravate the problem. Look who's come to dinner: The Taliban are treating the US with supreme confidence. (Photo: Reuters)

It is only now that things have begun to change as a result of concerted and coordinated actions by the security forces and intelligence. Our escalatory trans-border response would have had its effects even if bravado prevents admission. The results are visible — but the problem is not over. An increase in terrorist casualties or even at times of security forces does not necessarily mean an increase in terror; it could just as easily be a result of forceful anti-terror campaigns.

The second aspect is that so long as the driving force in Pakistan is their army, this jihad will continue — because the Pakistan army's attitude towards India or their own politicians will not change. They scarcely conceal their disdain for their own politicians but find them useful for international marketing when required. In Pakistan, the Cabinet meets in Rawalpindi not in Islamabad and they all wear the same khaki and sit in the same style — hands clasped in front of them and looking at each other unsmiling. 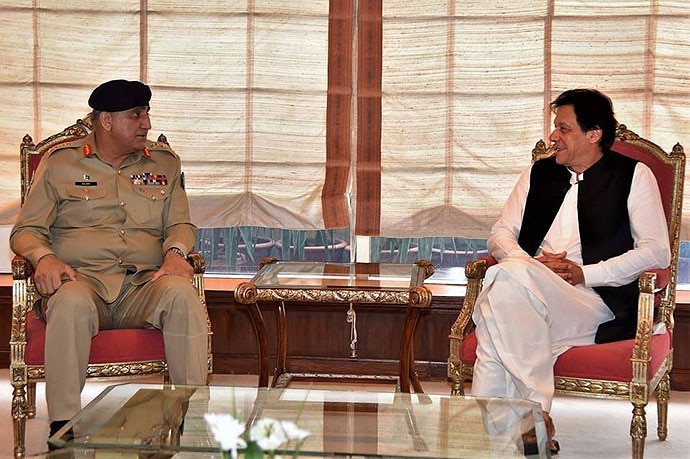 Who calls the shots in Pakistan? Not the 'PM Select'. (Photo: Twitter)

This overbearing attitude is reflected in their attitude towards India — and worse, 'Hindu' India. Four wars lost and they have not learnt a thing. For the Pakistan army, Kashmir is not the cause; it is an excuse to retain primacy. They will never be able to disband their jihadi corps without inviting blowback. Mere opposition to infidel India is thus martyrdom in the name of Islam. Let us not delude ourselves into assuming that if we can do a deal with Pakistan, the army will lose ground, democracy will flourish in Pakistan and we will have eternal peace. Perish the thought. The Pakistan Army never retreats at home. In any case, deal for what, on what?

While Pakistan has followed a consistent policy towards India, in the past we have vacillated between peace moves and angry gestures — it is only now that we have adopted a more realistic policy.

There is no urgency to talk to Pakistan. Our stand that talks under the threat of terrorism are not feasible is perfectly viable.

There is never any urgency to talk to a neighbour who does not believe in behaving like a neighbour.

Post your comment
#Narendra Modi, #Kashmir, #Trump meets imran, #Donald Trump
The views and opinions expressed in this article are those of the authors and do not necessarily reflect the official policy or position of DailyO.in or the India Today Group. The writers are solely responsible for any claims arising out of the contents of this article.