How not to honour Babasaheb Ambedkar

He was wholly at odds with what Hindus believed in.

Ambedkar is an avatar of India. As the maker of the Indian Constitution. As a spokesman of the Dalits who replaced Congress hacks. As an opponent of Gandhi whom no one else dared to oppose. As the one who burned the Manusmriti and criticised the very foundations of Hinduism. As a campaigner in Tank and temple campaigns. As a critic of the Congress policy on Muslims which would lead to Pakistan. As a proponent of real democracy. As the only champion of real social justice, not just plans to achieve them. Ambedkar was all this and more. Amongst the best of the best.

Cynicism at the time of celebration makes us question the motives of those who celebrate the 125th year of his birth.

Appropriating the memory of a person ignorant of what he stood for is absurd. Converting this appropriation for facile politics is unacceptably dishonest. Why borrow his persona without reference to his identity? Or even the slightest understanding of his thoughts, beliefs, causes and what he stood for?

Babasaheb was wholly at odds with what Hindus believed in. The core of Hinduism is the caste system based, as Lingat reminds us, on concepts of purity - making the absurd holy, and the holy holier than thou. Manusmriti was a good symbolic representation of what Hindu society and governance stood for.

We don't know who Manu was because so much of our shastra is ahistorical. The legendary KP Jayaswal thought he was an apologist for a post-Mauryan Brahmin who snatched the throne - adding to the hypocrisy of Brahmins. 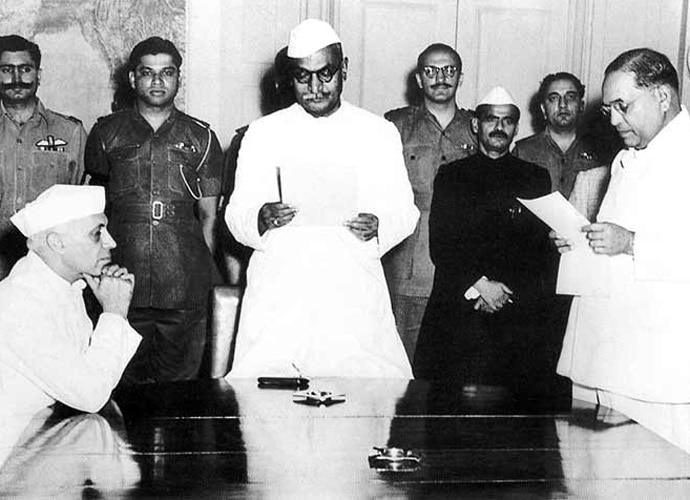 The sublety of the dharmasastra was as dangerous as the Hindu faith that inspired it. Today, the BJP-RSS want to appropriate Ambedkar without giving credence to Ambedkar's passionate belief that Hinduism was a social evil. Will the Hindutva combine accept this? Ambedkar would not have approved of the caste system which dominates politics. He would certainly not have approved caste-based reservations.

Or the other backward classes (OBC) category to include anyone who has a political hold on our rulers like the Gujjars and Jats. It's time to come back to reservations for the SC and ST only. The OBC was for some recognised categories in the south. Not for northern groups to appropriate it.

I am sure he would have denounced destroying the Babri Masjid and exposing the real culprits behind the Bombay and Gujarat riots. He would have opposed the Hindu treatment of Wendy Doniger's book and the oppression of Hussain and others.

He would have given short shrift to ghar wapsi. You can adulate a person without agreeing with all of their beliefs but when you are in total opposition to his views on Hinduism, do you have the courage to attack his fundamental attack on Manuvad and Hinduism itself. In fact there is no meeting ground between SCs and the Sangh Parivar, between Ambedkar and Modi.

The Congress had its own quarrel with Ambedkar. Gandhi wanted to take over the Dalit struggle. Every struggle needs allies, but stealing the struggle itself? When the plebs stop fighting for themselves and the oppressed, surrender the battle to others and when allies take over the helm of the campaign, democracy is lost.

In one of my long articles, I treated this as Ambedkar's fundamental and basic belief in social democracy. It sustained my critique of the liberal takeover of racism in England when I lived there.

But despite the Poona Pact which Gandhi's blackmail forced Ambedkar into, Congress was unrelenting in their political appropriation of the SC-ST vote after independence.

Now all the political parties lay claim to it. If anything is responsible for all this political support for Ambedkar Jayanti, you know why. I am not saying all should not rise to honour Ambedkar. He was of a kind that doesn't exist now. But we should do so with honesty, penitence and repentance.

Ambedkar's analysis of Pakistan is time and context related. But why did he go so far in support? I read his stance as saying, "If you Hindus are going to treat Muslims so badly, they will have no choice but to justifiably ask for Pakistan".

Also read - Release Ambedkar from the prison of his identity

Six years later, Nehru's recalcitrant refusal to negotiate in July 1946 could well have been the last turning point, though historians are divided on this. I have come to believe some of this.

He put it so well, when at end of the Constituent Assembly he said: "On the 26th of January (1950), we are going to enter into a life of contradiction. In politics we will have equality, in social and economic life we will have inequality... How long shall we live this life of contradictions... We must remove this contradiction... or else those who suffer inequality will blow up the structure of political democracy. While this Assembly has so laboriously built."

This was his message. This was his dream. And, given our fundamentalist and divisive leadership, we are nowhere near achieving it.

#Dr BR Ambedkar, #Caste Discrimination, #Constitution, #Reservation
The views and opinions expressed in this article are those of the authors and do not necessarily reflect the official policy or position of DailyO.in or the India Today Group. The writers are solely responsible for any claims arising out of the contents of this article.