How Maharashtra robbed Dr Saibaba of his rights

Until police can be compelled to respect basic human rights, we will continue to remain far removed from the democracy we claim to be.

"I hope you are doing well, despite the fact that you are all in a larger penitentiary, as Uncle Sam would call it. I have been in a smaller enclosure here for the last ten months. My wish to join you back in the larger prison-house has been thwarted once again. I am sure you all understand the anxieties of your friend's existence in the claustrophobic sealed concrete enclosure of an 'anda cell' behind seven heavy and gigantic gates." Gokarakonda Naga Saibaba's words (written over three months ago from the confines of the Nagpur Central Prison) carry that gritty tone characteristic of the man 'guilty' of supporting and participating in sundry issues and causes of the poor and dispossessed in various parts of the country over the last three decades.

Dr Saibaba, a Delhi University Professor in English, with 90 per cent permanent physical impairment of his lower limbs, was abducted on May 9, 2014 from a Delhi road by the Maharashtra police and has since been behind bars. His story is a telling commentary on the biases of a criminal justice system that readily releases convicted film-stars and politicians but insists on incarcerating those accused of committing the 'crime' of supporting or believing in thought contrary to the ruling ideology. Despite many Supreme Court rulings and the recent Kerala High Court assertion that 'being a Maoist is no crime', the reality is that it is just this accusation that keeps Saibaba and hundreds of others like him in prison for years on end. 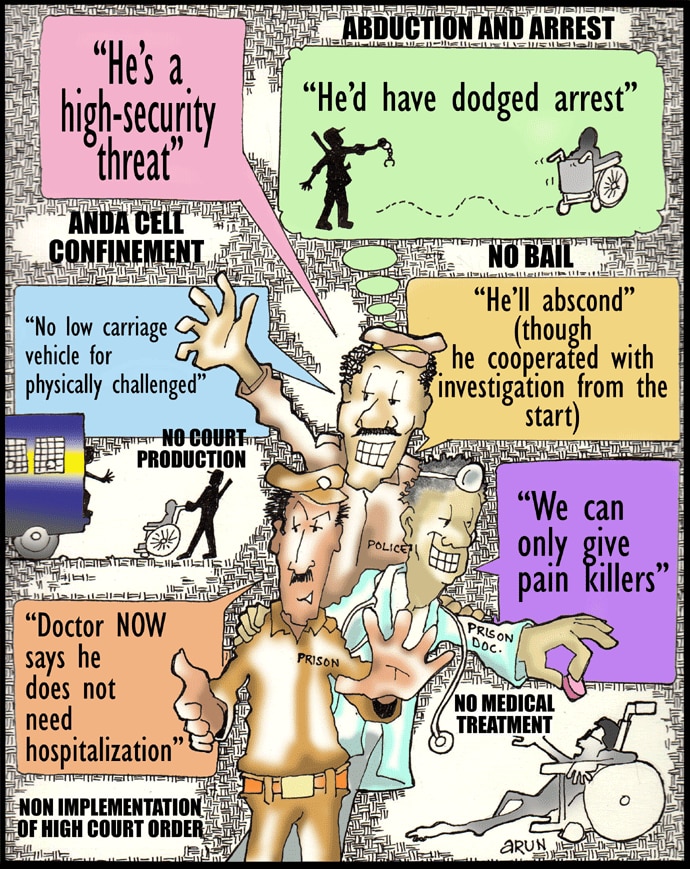 In the last thirteen months, Saibaba has had his bail rejected four times - thrice in the Sessions Court and once in the High Court. Despite his severe disability and his rapidly deteriorating medical condition, the State has not only vigorously opposed bail, but also gone out of its way to deny him proper medical care. Whenever Saibaba has applied for bail on medical and disability grounds, the prosecution has adopted the tactic of ensuring that facilities were provided in the jail when the bail application came up for hearing, but after the bail application was disposed of, those facilities are withdrawn.

It was these tactics leading to a rapid deterioration in Saibaba's health that prompted the bench of the Chief Justice of the Bombay High Court to take suomoto cognisance of the matter and pass orders on June 17, 2015 directing that Dr Saibaba should be taken from jail to a private hospital within 24 hours and be allowed to be accompanied by his wife and brother and a court-appointed doctor, where he was to be kept for a week until further orders of the court. Despite the detailed order of the High Court, the prison authorities, under the directions of the police anti-Naxal operations (ANO) department, did not implement the court's directions and no one except the police were allowed to be with Saibaba when, as a formality, he was taken to the hospital for an hour and returned back to jail. Though Dr Saibaba is in jail custody and the court directions were to the jail and medical authorities, it was the ANO's Inspector General of Police, Ravindra Kadam, who was directly supervising operations and even giving medical updates to the press on behalf of the doctors. It can now be expected that the doctors' earlier report submitted to the court, which showed he required hospitalisation, will now, under police pressure, be changed to show some miraculous recovery. The long weary battle of Saibaba to salvage his health and reclaim his liberty is likely to continue its uphill course.

His letter relates an earlier experience when the Chief Medical Officer (CMO) of Nagpur was questioned by the Sessions Court why his treatment constituted primarily of diclofenac tablets. The CMO explained that this was because all physically handicapped persons were affected by excruciating pains for which medical science had found no answers except pain-killers. All this when Saibaba was known to have a number of medical problems, including stones in the kidney, heart problems, neurological and orthopedic issues, which were continuously being aggravated by the jail conditions.

Meanwhile the prosecution sees that the trial is deliberately delayed so that Saibaba can remain imprisoned as long as possible. Aside from the first production in court, there has been no attempt to take him to court - on the plea that the police lack a low-carriage vehicle suitable for the physically challenged. This was also a reason earlier given at an earlier hearing for not even taking Saibaba to the hospital, until a strict order from the court forced the authorities to bring such a vehicle, which had always been in their possession.

The High Court is now seized of the matter and has again on June 22, 2015 taken serious note of non-compliance by the state of its earlier directives and has passed further orders in this regard. But for a Dr Saibaba, long languishing in Anda dungeons, this perhaps would bring scant comfort. One could not fault him if he were to be a bit cynical of the outcome of such orders - he has after all seen the casual contempt with which the authorities have treated many such judicial orders thus far. Until ways can be found to compel the police to respect basic human rights and the rule of law, we will continue to remain far removed from the democracy we claim to be.

Post your comment
#Anti-Naxal operations, #Maoist, #Gadchiroli, #Dr Saibaba
The views and opinions expressed in this article are those of the authors and do not necessarily reflect the official policy or position of DailyO.in or the India Today Group. The writers are solely responsible for any claims arising out of the contents of this article.