What an MP district can teach India on fighting drought

The message is simple: catch the rain where it falls.

In the scorching 45 degree Celsius heat, Surendra Singh Tomar, a 30-something farmer from Harnawada in Dewas district of Madhya Pradesh, excitedly showed the deepening of the farm pond that he was carrying out in his field. Inspired by similar farm ponds in his neighbourhood, Tomar dug one of his own in four years back.

It did not rain after June 2015 in the district. But his pond, 12-feet deep and less than one acre in area, stored enough rain water to last the entire winter enabling him to get a second crop in the year, unlike those of most other farmers who could get only a single rain-fed crop owing to the absence of reliable irrigation. Having deepened his farm pond every year, Tomar could store enough water in 2015 even during the dry spells so much so that apart from his 20 bigha land, he could irrigate another 20 bigha of his neighbour for the winter crop.

"Earlier, when we depended on rain-fed crops, we somehow managed to make the ends meet. The farm pond changed the picture. Since 2012, I am able to have another crop in winter and since last year, using my water, I can irrigate my neighbour's field and get a share in the income," he told me excitedly last week. 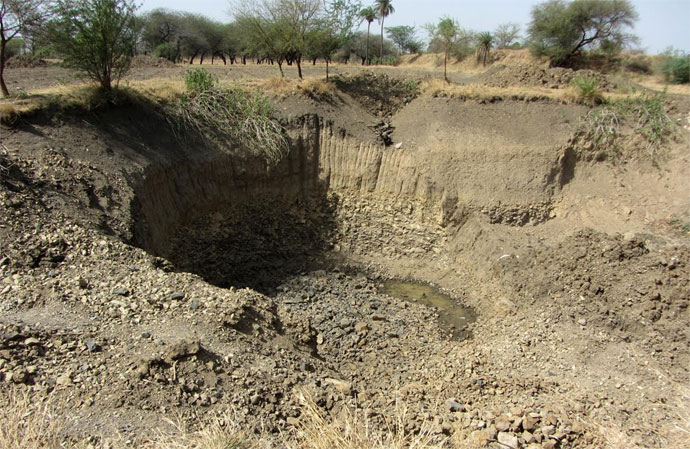 Farm pond in the process of being deepened at the field of Surendra Singh Tomar of Harnawada village in Dewas. (Pic credit: Nivedita Khandekar.)

This was from the same Dewas district where a water train was sent twice in the last two decades from Indore. Not just Tomar, the entire district was dependent on rain-fed irrigation and managed with just one crop, provided there was timely and ample rain.

Since 2006-'07, the farming community, with some good-intentioned officials at the district level, devised the farm pond scheme where farmers chipped in with their money and the administration with technical inputs. The long-term mitigation plan has turned out to be a huge success with hundreds of farmers going in for the farm pond scheme and benefiting from the winter crop.

The message is simple: catch the rain where it falls.

Despite that, people have ensured that the 500-year-old Viprasar tank is filled to the brim. What continues today is community farming, and the people have desisted from letting any private party take over the precious resource even as there is a total ban on water-guzzling crops.

Prime Minister Narendra Modi mentioned one of Dewas' success - Gorwa village - in his Mann ki Baat on April 24, 2015. He also pointed out how work done by the community is neglected by the media while that by government (done or not done) is highlighted. Community engagement is the main driver at both Dewas and Ramgarh. 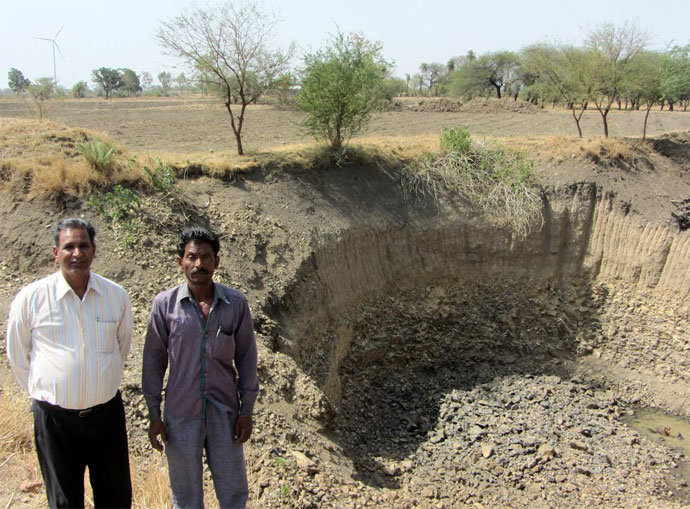 Dewas has black cotton soil with a layer of sandy loam below it while Ramgarh has gypsum below the sandy stretch which doesn't allow percolation of water and enables holding of rainwater in ponds/lakes.

So when I met Chatar Singh Jaam of Ramgarh at the National Consultation on Drought organised by Swaraj Abhiyan with Jai Kisan Andolan earlier in the month at Delhi, I asked him how their example can be replicated in other parts of India, especially Marathwada, Bundelkhand or Telangana, which might have a different soil type.

Also read: Bharat Mata is thirsty. No water for her, Fadnavis?

Smiling and oozing traditional wisdom, the down to earth farmer told me it was possible as nature had made provision (of holding water) according to one's requirement and Varun devta (rain god) also sends water as much as people can hold. "The trick is not to abuse the nature's system," he said, the smile even more meaningful through his white moustache and twinkling eyes.

The National Consultation on Drought had drawn attention to such horrible misuse by Indians across the states which had put the country in the grip of "a mega water crisis", as activist-journalist P Sainath had put it then. India's economy would collapse if we didn't open our eyes to the alarming situation, he said.

The Maharashtra government is actively encouraging Jalyukta Shivar (a scheme comprising a range of water-harvesting programmes), but community participation in these government-run schemes is very less. Telangana too is facing one of its worst water crisis. Ditto in Odisha. But there is no serious effort at harvesting water, neither at the government level nor at the community level. 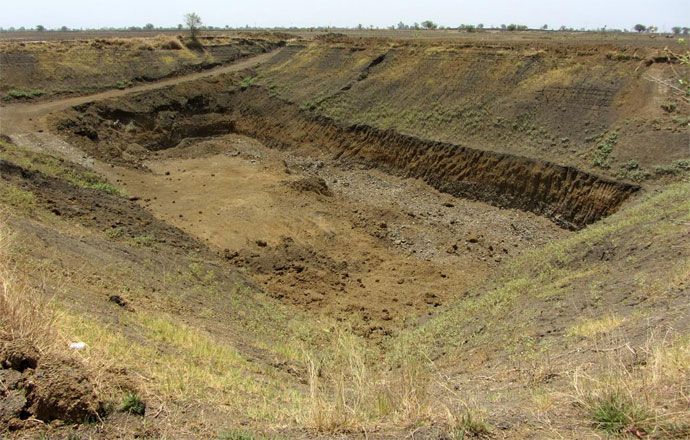 Few months ago, Delhi witnessed a terrifying situation when during the Jat andolan, protesters damaged the Munak canal in Haryana which brings water to the national capital and is its veritable lifeline. Delhi has slowly allowed its 1,000-odd ponds, lakes and johads to be encroached or built over and has become a parasite robbing neighbouring states of their share of water. Again, what is missing is the community participation in storing rainwater in order to increase the water table and be water self-sufficient in days to come.

Following up on its PIL in the Supreme Court drawing attention of the judiciary on the seriousness of the situation and hence prompting the government to act on the severe drought that has affected almost half of the country, Swaraj Abhiyan led by Yogendra Yadav and other leaders on May 21 have embarked on a "Jal Hal Padyatra" from Somvati village in Marathwada's Latur till Mahoba in the Uttar Pradesh part of Bundelkhand through the Madhya Pradesh part of the same region. The purported purpose of this padyatra is to discuss the drought situation and take the message of harvesting rain where it falls, planting trees and increasing water availability.

Time to act till there is time

I am not aware whether this Jal Hal Padyatra will pass through Dewas or not. But the learning curve from Latur to Lapodia - original concluding point of this yatra and a place in Rajasthan also known for its good efforts at rainwater harvesting bringing in a lot of benefits to the community - or now say Latur to Mahoba, should, rather must, pass through Dewas. Why Dewas? Because it did not have the traditional rainwater harvesting systems that Ramgarh or Lapodia had and yet achieved what the two places did with less water.

As Anupam Mishra, environmentalist, editor of Gandhi Marg and author of the famous book Aaj Bhi Khare Hai Talaab, says: "Drought never comes alone. It is preceded by drought of thoughts and ideas."

Thankfully there still are people - like those from Ramgarh, Lapodia and Dewas - who have not run out of ideas: good if we follow, else we would run out of water.

#Marathwada, #Water Crisis, #Drought
The views and opinions expressed in this article are those of the authors and do not necessarily reflect the official policy or position of DailyO.in or the India Today Group. The writers are solely responsible for any claims arising out of the contents of this article.