India jumping 30 spots in World Bank ease of doing business 2018 rankings is good, but not enough

The report doesn’t quite take into account the massive disruptions caused by demonetisation and GST.

A comparative analysis of business regulations, environment and domestic firms in 190 countries, the Doing Business 2018 report, that puts India in the bracket of top performers, which have shown significant improvement in the business sector, has certainly send a cheerful ripple across the country’s otherwise gloomy economic and business spheres. 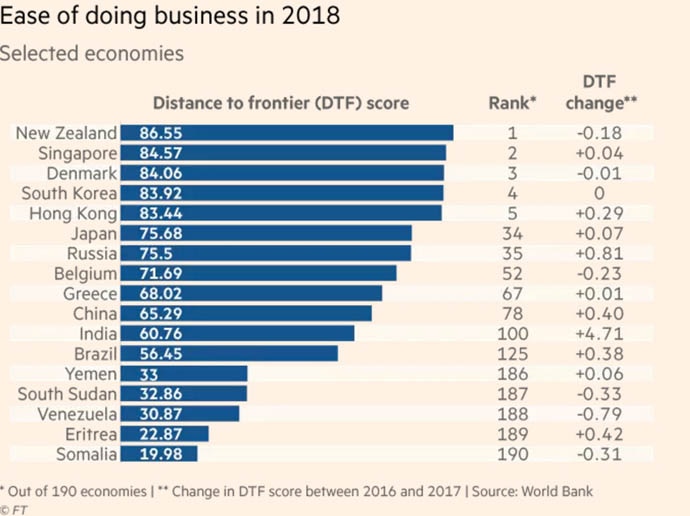 The jump is undoubtedly highest that any country has experienced ever, and clearly this is a significant scoring point for India. Naturally, this endorsement by the World Bank is being seen as a major victory for Modi government’s reform credentials, and is being widely hailed by many in political and media circles. The World Bank Doing Business 2018 report considers reforms and policy changes from June 1, 2016 to June 2, 2017, and limits itself to study of New Delhi and Mumbai. Photo: PTI

What the report says

The report, based on data from New Delhi and Mumbai, is a study on impact of reforms in key areas like access to credit, power supplies, protection of minority shareholders, etc. In fact, the 2018 report identifies major areas in which reform has borne fruits and accordingly provides observations where we are still lagging.

India ranked 4th in the world when it comes to protecting minority shareholders rights. Even ahead of Canada HK UK. Amazing #EaseOfDoingBiz

Firstly, the report says India is among the top improvers, in fact among the top 10 of them, which have shown substantial betterment in the fields measured by Doing Business study for 2018. Along with Russia, which is at a much higher rank, at 35, India has emerged as the big gainer, and is the only country in South Asia in the top 100, at the 100th position. In 2016-17, India was at 130th position, while before that it was at 142th.

Secondly, India’s performance was driven by reforms in taxation, insolvency laws and access to credit. “India’s performance is not based on efforts of just one year but consistent efforts made over the last three years to continuously improve the regulatory environment of doing business,” Annette Dixon, vice president South Asia, told reporters.

India saw significant rise in six of 10 indicators, including winning construction permits, enforcing contracts, paying taxes and resolving insolvency. However, in the instances of opening a new business, getting electricity connection, cross-border trade and registering property, there were falls.

The Doing Business report also mentioned that setting up of debt recovery tribunals has eased non-performing loans by 28 per cent and has lowered the interest on larger loans. As a result debt recovery has increased in rate, but cost of credit has come down, while access to it has gone up.

Moreover, in the case of the “distance to frontier metric”, one of the key indicators of the survey, India jumped from a score 56.05 in 2017 to 60.76 in 2018, no mean feat. Little wonder then that experts within the government, such as Niti Aayog CEO Amitabh Kant, think that India “can easily jump into the top 50 of the Ease of Doing Business rankings”. Kant says: “It’s a huge achievement. No country in the world has made such a big quantum jump over 2-3 years – 42 positions.”

Limitations of the report

The World Bank Doing Business 2018 report considers reforms and policy changes from June 1, 2016 to June 2, 2017, and limits itself to study of New Delhi and Mumbai, the two biggest metropolises and hubs of commercial activities.

The #easeofdoingbusiness rating doesn't include #GST and only measures Mumbai & Delhi and not the rest of India https://t.co/R3A6DLnWtl

As is evident, the report closes just one month before the rollout of the Goods and Services Tax across the country, which led to major disruptions in the informal sector, leading several thousands of small and medium businesses to shut shop. The impact of GST will be felt in 2019 report, which will come next year; however its impact may taper down because of the rate cuts that the government is bringing in response to the hue and cry.

A grand salute to the spirit of Indian businesses!They stayed positive during the period of #easeofbiz survey amid historic business turmoil

In addition, the World Bank concedes that the grand study has enormous “methodological limitations” and “does not measure corruption, nepotism, macroeconomic stability, political freedom and informality”, according to Valentina Saltane, a WB researcher part of the report team quoted by Financial Times.

For example, even in the case of Russia, “executives lament the state’s reliance on oil and gas revenues, the oversized role of government-run companies in the economy, and myriad levels of bureaucracy and red tape inherited from the Soviet Union.”

Because the report does not take into account “informality”, that is cash-driven informal economy that forms 45 per cent of India’s GDP and 90 per cent of the employment opportunities, naturally, the staggering impact of demonetisation too has been glossed over. Because of the government’s “cashless push”, the digital banking went up, and reflected in the raised rankings. But the overall the negative influence of note-bandi, that brought the GDP growth rate down by two percentage points, wasn’t visible in the World Bank Doing Business 2018 rankings.

Taking World Bank with a pinch of salt

As it’s clear, it’s in the heavily formalised sector, and also in the real estate and construction sector especially after the RERA regulations were brought in, that the Doing Business 2018 has seen a big improvement. But does that mean the template can be replicated for India as a whole?

In fact, this is not the first time that the World Bank data and projections have been at odds with the findings of India’s own ground-level researchers and workers. Even in the case of Aadhaar, the World Bank has hailed the drive and has also said that there have been massive savings because of the UID and its elimination of ghosts and frauds in the PDS. This claim has been challenged by Indian observers and civil rights activists witnessing the ground reality, such as the Jharkhand starvation death because of Aadhaar not being linked to a family’s ration card.

As the Doing Business report is a cause for cheer, rightfully so, it must also be seen as a glaring example of rising inequality between the bustling metros and the rest of India. Access to formalised financial technologies is still a very limited slice from the pie that is Indian economy, of which 58 per cent is owned by the top one per cent of corporate behemoths. This means that while the 30 spot jump in 2018 rankings has been good for India’s business morale, the actual benefits have reached very few Indians.

That’s something to think about.

Post your comment
#World Bank, #Ease of Doing Business
The views and opinions expressed in this article are those of the authors and do not necessarily reflect the official policy or position of DailyO.in or the India Today Group. The writers are solely responsible for any claims arising out of the contents of this article.