Power sector reform should be a top priority for both nations as few other changes can yield economic gains at a similar, and swift, magnitude.

While the energy sector remains a prominent enabler of India-Nepal trade ties, the establishments on both sides often do not give it its due.

It is a fact that most India-led power projects in Nepal are not faring in the spirit that they were set up in. This habitual distracting of productive possibilities makes the credentials of ‘Brand India’ suffer quite badly in our northern neighbourhood. For long, the power sector has not got the attention it deserves from the two governments. (Photo: Reuters/file)

The second pressing concern continues to be the waste of power transmission. For long, this had attracted only the apathy of decision-makers in the government and the industrial entities concerned. But of late, there is some sign of course-correction, as finally, Nepal and India have agreed to set up an Energy Banking Mechanism (EBM) to stop the waste of electricity generated in Nepal.

The Nepal Electricity Authority (NEA) and the Central Electricity Authority (CEA) of India in December agreed to work on the guidelines on power exchange. The draft under discussion will be seen and approved by the energy secretary-level joint steering committee (JSC) meeting scheduled in this month. If properly implemented, this shall help to deal with the situation where production surpasses demand.

This holds importance in the short, medium and long term, as Nepal is moving aggressively to scale up its energy production capacity and in greater engagement with India.

The energy banking essentially works in barter mode, where exchange takes place of electricity for electricity — and without relying on monetary transaction.

Supported through this mechanism, Nepal will be in a position to export electricity to India when it has surplus reserves, and import back the equal amount when needed for domestic uses.

Following the pattern, Nepal supplies electricity to India during the wet season when the domestic output is high, and imports it back during the winter, when domestic production is much lower than the demand — electricity generation in Nepal drops by more than 50% in winter due to low discharge in the snow-fed rivers, making power import from India inevitable.

As per a report in The Kathmandu Post, Indian officials present in the meeting were also positive about Nepal’s proposal on the operational modality of the new Butwal-Gorakhpur Cross-Border Transmission Line Project. Based on the proposed operational modality, the upcoming meeting will decide how funds will be arranged for the construction of the power line.

Meanwhile, in a separate meeting of the Nepal-India power exchange committee, it was decided not to increase the price of electricity that Nepal imports from India. Recently, the Indian government has introduced guidelines on cross-border electricity trade, and it continues with the existing tariffs until the new guidelines take effect. 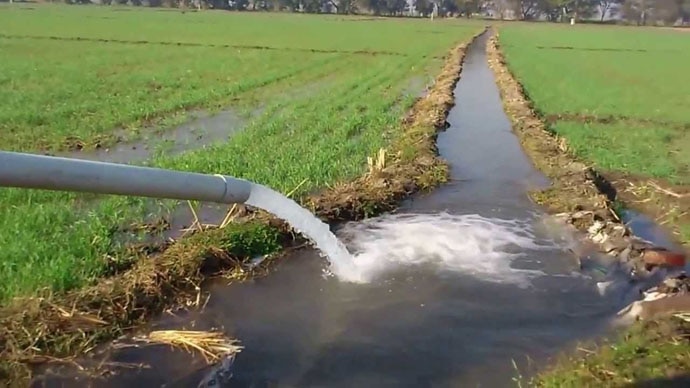 Nepal produces surplus power in the monsoon — when the Indian farm sector is crying out for electricity. (Photo: YouTube)

Reportedly, Nepal has been advocating for energy banking with a belief that seasonal complementarities of demand and supply of electricity in the two countries will make the mechanism a sustainable model of power transfer. As a majority of power plants in Nepal are run-of-the-river type, they generate a large amount of electricity during the monsoon — the surplus coincides with a sharp rise in demand for electricity in India, with increased power consumption in the farm and industry sectors, which, of late, risk demand-supply distortions.

It is understood that institutional distortions in the energy sector stem from the dominance of government ownership, the lack of competition and soft-budget constraints, under which governments have repeatedly bailed out heavily indebted utilities. This is simplistic, but can’t be overlooked, as it remains a fact that sectoral reforms have not much impacted the domination of state-owned enterprises here.

Even in these changed times, government planners, not the market, allocate fuel supplies and set prices, without keeping much welfaristic commitment. Since market players get limited say on performance and efficiency on mass output, pressing concerns continue on both cost and output.

It is important to make power sector reform a top priority as few other reforms can quickly yield economic gains of a similar magnitude.

By expanding access to electricity and improving the quality of supply, power sector reforms would also directly benefit poor households in both India and Nepal.

The most significant and positive outcome is likely to come from institutional reforms in the power sector, which would be possible through the expansion of reliable access to electricity, appropriate pricing of carbon and emissions of local air pollutants.

Thinking from the regional perspective, South Asia faces enormous demand for electricity. This calls for greater capacity generation — without following an unsustainable route.

A striking revelation from a recently published World Bank report says, “South Asia has the world’s largest population living off the grid — close to 255 million people in 2016, more than a quarter of all the people in the world living without access to electricity.”

Noticeably, India and Nepal have a vital share in these problematic figures. Nepal is moving aggressively to scale up its energy production capacity. (Photo: Reuters/file)

The same report presents a grimmer face of the low wave of power sector reforms in the region. “Because of low access rates and low quality of supply, per capita electricity consumption in South Asia is the second-lowest in the world (after Sub-Saharan Africa). At 707 kilowatt hours (kWh) a year in 2014, it is less than a quarter of the world average.”

Since India and Nepal are inter-dependent on each other for meeting their energy requirements, it is important for them to carefully review the areas that are in urgent need of constructive intervention. Any positive move would help create greater economic engagement between the two countries.

Further reforms in the sector would help in enabling optimum use of existing power infrastructure facilities, removing waste and increasing cleaner electricity supply through process-driven system at place. Equally, it is important to rationalise the price of energy to incentivise seamless investment and conservation, which shall keep both the production and distribution cycles in harmony.

A serious consideration by India and Nepal for joint efforts in power sector should script new chapters in bilateral trade and economic cooperation.

Next to the idea of the Energy Bank, the two countries must come out with a comprehensive plan for boosting the power sector.

The time is opportune now!

#Butwal-gorakhpur project, #Power distribution, #Electricity, #Indo-Nepal ties
The views and opinions expressed in this article are those of the authors and do not necessarily reflect the official policy or position of DailyO.in or the India Today Group. The writers are solely responsible for any claims arising out of the contents of this article.