When Indira Gandhi declared Emergency: 44 years ago, the build-up to the suspension of our liberties

In June 1975, the political climate around Indira Gandhi was growing stormier by the second. On the 25 of June, Emergency was declared. But the build-up was full of strange stories and characters.

In 1969, Sanjay Gandhi was 23 years old and had been trained at the Rolls Royce factory in Crewe in the UK. Though he did not complete the course, Sanjay was one of several applicants to seek a license to manufacture a small and cheap car in India — in 1970, he was the lone applicant to have been granted the license. The Haryana government, under Bansi Lal, handed over 300 acres of land for Sanjay’s Maruti factory — some 15,000 farmers were evicted to free the land.

PN Haksar, who was the principal secretary to Prime Minister Indira Gandhi till 1973, was dropped from his post for opposing the Maruti project.

Indira was charged with nepotism — she made little effort to deny the charge. Each time the matter was raised in Parliament, Indira would purse her lips and shrug off the criticism. It's all about loving your family? Indira Gandhi had built up a political dynasty, accused of gross nepotism. (Photo: India Today Archives)

This period also saw the emergence of Jai Prakash Narayan, a freedom fighter who was living quietly in Bihar till then. JP, as he was popularly called, was a young man in 1921 when Nehru and Abul Kalam Azad spotted him. To keep him away from the freedom struggle, JP’s family had packed him off to the US, where he spent seven years in various colleges. But JP could not resist joining the Congress and the freedom movement. In 1930, he met Nehru and joined the party.

After spending considerable time in various prisons, JP was finally released in 1946 — but soon after independence, he developed differences with Nehru and joined the Congress Socialist Party, which was also known as Socialist Party (India) or Praja Socialist Party.

On June 25, 1975, the entire Opposition showed its strength when Jai Prakash Narayan appealed to the police and armed forces to ‘disobey’ any illegal orders of which their conscience did not approve. Once a Congressman, Indira's rule had JP take on the Congress like never before. (Photo: India Today)

The following morning, a cabinet meeting was called.

Instead of the established practices of discussion and consultation, Indira’s colleagues were merely informed that Emergency was being imposed under Article 352 of the Indian Constitution. The Emergency effectively bestowed upon Indira the power to rule by decree, suspending elections and civil liberties.

A declaration of Emergency was not unusual in developing countries like India. Even in the UK, the Edward Heath government had called for it five times in the four years of its existence. In Australia, the governor general had dismissed the Prime Minister in 1975 and called for fresh polls. In India, too, there had been a declaration of ‘external’ Emergency during the 1962 and 1971 wars.

But in the summer of 1975, there was nothing urgent for which to call an Emergency. The political scientists and scholars of that era felt that if individual states such as Bihar had some problems, a presidential decree would have sufficed. In 1978, the Shah Commission — which went specifically into the Emergency and its excesses — found that there was no evidence of a threat to the Constitution or law and order in the country that warranted the declaration of an Emergency.

Indira’s colleagues kept mum, perhaps recalling that discretion was the better part of valour. Only Defence Minister Sardar Swaran Singh made a feeble attempt to ask if such drastic action was necessary. Minutes later, Indira was heard announcing on All India Radio the merits of the Emergency — and Swaran Singh found himself replaced by Bansi Lal.

Subsequently, during the Emergency, the 42nd Amendment in the Constitution of India of introduced and enacted in November 1976 when the life of the Lok Sabha had expired beyond five years. The Amendment purported to reduce the power of the Supreme Court and the High Courts to pronounce upon the constitutionality of laws. It also declared India to be a socialist, secular republic and laid down the duties of Indian citizens to their government.

The main author of this amendment was Dev Kant Barooah, who, as Congress president, had immortalised himself by coining the slogan, “India is Indira, Indira is India.”

AR Antulay was another prime mover behind the amendment. When the Bill was placed in Parliament, Antulay, a barrister from Lincoln’s Inn, outdid Barooah in praising Indira and called for a ‘fresh look’ at the existing Constitutional provisions — among them, five-yearly Parliamentary polls. Antulay praised Indira for driving out Congressmen who were not in the Nehruvian mould. Next, he was heard saying, “It has been left to Nehru’s proud daughter, the daughter of the Indian nation, the daughter of India, ancient, present and future, to bring into effect what Nehru had visualised.”

Defence minister Bansi Lal tried to outdo both Barooah and Antulay when he told Indira’s cousin, BK Nehru, “Get rid of all this election nonsense... Just make our sister (Indira) president (of India) for life and there is no need to do anything else.”

Once again, Sanjay was seen as the moving spirit behind all this.

With friends like Bansi Lal, Sanjay found ballast for his ride up but found himself overloaded as he came down.

Sanjay stood for the following things:

These were all good ideas — but Sanjay and his men tried to implement them with powerful force. The young man had no experience, but he went ahead and made his mother and himself targets. Sanjay’s biggest drawback was that each time he realised he had made a blunder, he chose to turn it into a bigger disaster.

The office of the Defence Minister was the highest that the small-time lawyer from Golagarh Bhiwani in Haryana achieved during his long career, which saw him as the Chief Minister of Haryana four times. The son of a Jat farmer, Bansi used to walk barefoot for many miles to go to school each day. He rose to become a lawyer in the court of the Nawab of Loharu but gave up his legal practice to become a bus conductor — his detractors said his skill in using foul language was acquired during his tenure as a bus conductor, and those of sycophancy and furthering his personal interest during his time at the Nawab’s court. Widely unpopular and hugely powerful, Bansi Lal was one of the most ubiquitous faces of Emergency. (Photo: PTI)

Throughout his long career, Bansi Lal was obsessed with power. As Defence Minister, he became the first in independent India to apparently meddle with promotions and transfers of Defence personnel while taking a personal interest in the purchase of equipment. General Tapishwar Narain Raina had a difficult time putting his foot down whenever possible to stop Bansi Lal’s interference in routine matters of the armed forces. It was said that when Bansi Lal tried to sound General ‘Tappy’ Raina about the army’s role in quelling Opposition agitations, the General bluntly told him that the army would not be allowed to be used to “further her ends” — but would obey only those orders which are legally construed.

When Jagjivan Ram returned as Defence Minister under Janata party rule, he reportedly reversed several cases where decisions taken by his predecessor Bansi Lal were described as “taken not in the best interest of the country”. Bansi Lal also holds a dubious record of putting a ban on press correspondents interacting with service chiefs.

Bansi Lal became the Chief Minister of Haryana for the fourth time in 1996 — when he floated the Haryana Vikas Party. He won on the plank of prohibition. One of the first orders passed by him on assuming the top post was introducing prohibition in the state. Ironically, he paid the price for the move. The Haryana Vikas Party was able to win just two seats in the 2000 Assembly elections when the Congress, with Sonia at its helm, was his ally.

Bansi’s humiliating defeat in 2000 saw his opponents once again singing an old limerick that used to do the rounds in the 1950s, when he had just entered politics. It went like this, “Bhiwani mein the ek phateechar vakil, na qanoon jaane na jaane daleel; Woh karte the jo bhi vakalat ki baatein, woh hoti thi sab jehalat ki baatein. Jo boya tha, so hi kaata, ab to hai bas ek sawaal, kahan gaye woh Bansi Lal? (In Bhiwani, there was a ragged lawyer, who knew neither law nor legal arguments. Whatever he did speak of law and legal arguments were signs of his ignorance. As he sowed, so did he reap. Now there is only one question, where is that Bansi Lal?)”

However, Bansi Lal did display some flashes of brilliance during his chequered career.

He was responsible for electrifying all of Haryana’s villages during his tenure as chief minister in the late 1960s and 1970s. He was also seen as a pioneer of highway tourism in the state — a model adopted later by a number of other states.

Meanwhile, as such characters flourished in the Emergency, Indira continued to have a different take on her son Sanjay. After the defeat of 1977, writer and filmmaker Khwaja Ahmad Abbas sought an appointment with the former Prime Minister. He gave specific instances of excesses during the Emergency, ranging from forced sterilisations to violence, but Indira made no attempts to defend herself or Sanjay.

“Sanjay is a very simple, sincere boy,” she said in a voice in which Abbas noticed a tremor as if she was pleading for her son. “He does not drink or smoke and does not take tea or coffee.” 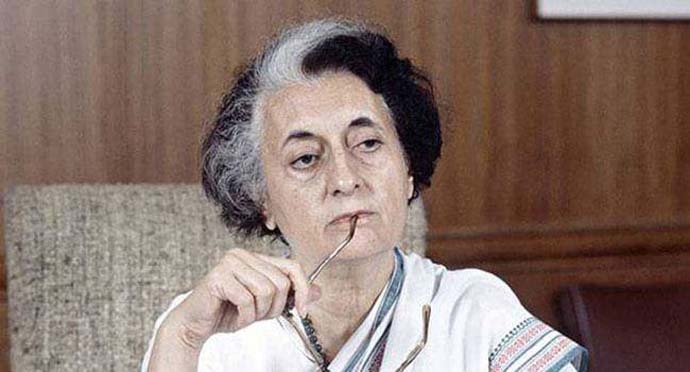 Indira blamed her party’s chief ministers, the CWC and the AICC office bearers for the entire 'Sanjay build-up'. Apparently, as Prime Minister, Indira had written numerous letters to the chief ministers of the party-ruled states, asking them not to accord state receptions for Sanjay, but they continued to do so.

Indira described Sanjay as a “doer”. “You see, he isn’t a thinker. He is a doer. I mean a cent per cent doer. When he wants something done, he gets it done,” she told her biographer, Dom Moraes.

Maneka Gandhi, a senior BJP MP now, continues to defend her husband, Sanjay, and the Emergency. The trains ran on time. What more can you want? Maneka Gandhi noted the silver lining in the Emergency. (Photo: PTI)

According to her, the Emergency was something that brought about order and discipline in the country.

She is reported to have said, "There were no power failures, no strikes or lockouts, citizens went about without the fear of being mugged, robbed or raped, everything was available at reasonable prices, the slums had been cleared, the stench of open sewers abolished and, instead, clean, wholesome and cheap housing complexes raised in the suburbs, the arid desert of sand and rock turned into lush green, parks and woodland. These were only some of the things that Sanjay did for his city."

(With authorised excerpts from Rasheed Kidwai's book 24 Akbar Road: A Short History Of The People Behind The Fall And Rise Of The Congress; Hachette India, 2011)