Emergency in Kerala: The trains ran on time, young students like P Rajan were killed

The Emergency meant a surface of tranquility in Union-ridden Kerala. But under the surface, tremendous brutality simmered, which burst forth in the P Rajan case that rocked the state.

I was in my own bubble of domesticity and motherhood when Emergency was declared.

I had an active two-year-old to care of and the second one growing inside me. I was on a sabbatical from writing. And so, though I kept abreast with what was happening, my involvement with journalism was peripheral.

In Trivandrum where I lived, we were actually one step removed from the turmoil that ensued in the North post-June 1975. In my middle-class domestic world, what mattered at that time was the fact that life suddenly seemed more tranquil — the famous militant labour unions that would make their presence felt in every aspect of our daily lives had quietened down. The jathas which constantly blocked the Main Road in front of the Secretariat reduced.

Achutha Menon, the most popular CPI leader who was Chief Minister for a second term at that time, continued to be in power until the Emergency ended. This was serendipity in a way because during his extended seven-year-long tenure, he managed to implement some of his important development projects such as the Land Reforms Act. He also enacted laws on agricultural labour and provision of gratuity for industrial workers. He started the one-lakh housing scheme in which my old friend, the late Laurie Baker, was involved. Achutha Menon used this period to take the first steps towards the industrialisation of Kerala. He enunciated a Science Policy and established a number of 'Centres of Excellence', like the Sri Chitra Thirunal Institute of Medical Science and KELTRON. Achutha Menon: Arguably the most popular CPI CM of Kerala who developed the state during the Emergency years. However, he claimed helplessness in the Rajan-case (Photo: C. Achuthamenon Foundation)

But, obviously, everything was not hunky-dory during the Emergency in Kerala.

The freedom of press was curtailed here too. My colleagues were disturbed.  We were afraid to speak our minds in public. I could only get undoctored news from active colleagues who were willing to share information with me.

But at what cost?

And then, came the infamous Rajan incident which woke everyone up and brought the whole of Kerala together. It also cost some eminent politicians and government officials their careers.

Who killed Rajan? Why? And how? The whole of Kerala was agog with speculation.

P Rajan was a brilliant student at the Regional Engineering College in Calicut with no specific political affiliations. He was a good singer and an actor and a popular student. On March 1, 1976, when he had just returned to college after participating in an inter-collegiate Arts Festival, a group of policemen raided his hostel and took him away.

That was the last time his friends saw Rajan.

Those were days when all dissidents were easily dubbed 'Naxalites' and taken into custody. Soon, the word went round that Rajan was arrested because he was a Naxalite and involved in a murder case. Rajan’s father, Eachara Warrier, who was a Hindi teacher, tried desperately to locate his only son — but it was all in vain. He appealed to the Chief Minister Achutha Menon who referred him to the veteran Congress leader Karunakaran, who was then the Home Minister. Since Karunakaran represented Mala, which was Rajan’s family’s constituency, Warrier was hopeful that he would help him.

The Emergency was on — and no one would help. 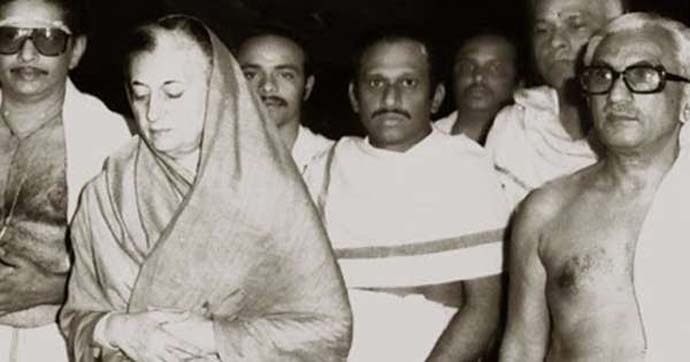 Meanwhile, through both formal and informal networks, news and speculation of what could have happened to Rajan leaked through. The names and incidents were on everyone’s lips. DIG (Crime) Jayaram Paddikal was alleged to have ordered and supervised the torture of the student in a Tourist Bungalow at Kakkayam. 'Uruttal' — an inhuman form of torture. It is said that this brutality finished him off.

His body was never found.

The courts reopened the case after the Emergency was lifted. After an adverse judgment from the court, Karunakaran, who had by then become Chief Minister of the state, was forced to resign. Jayaram Padickal was convicted but his conviction was overturned. Some others involved went free. Rajan’s family went through untold suffering. His story became the subject of a couple of books and movies.

A few days after the Emergency ended, we shifted house once again and it was back to normal life in Trivandrum. The unions were back in action; we had to pay the set of guys who loaded our goods onto our lorry and the new set of guys who unloaded them when we reached!

And, most importantly, the press was back in full throttle.

Also read: When Indira Gandhi declared Emergency: 44 years ago, the build-up to the suspension of our liberties

Post your comment
#K karunakaran, #C achutha menon, #P rajan case, #Kerala
The views and opinions expressed in this article are those of the authors and do not necessarily reflect the official policy or position of DailyO.in or the India Today Group. The writers are solely responsible for any claims arising out of the contents of this article.