What Emmanuel Macron 2.0 means for France and Europe

After a turbulent five years as the youngest French President, Emmanuel Macron has been reelected. Take a look at his political journey, what this means for France and Europe, and the challenges he is going to face.

Emmanuel Macron created history as he became the first French president in the last two decades to win a second term.

He won over 58 per cent of the votes, interior ministry figures showed, reported Reuters.

VIDEO: French President Emmanuel Macron is set to begin efforts to unite a deeply divided nation after winning re-election on Sunday in a battle against rival Marine Le Pen that saw the far right come its closest yet to taking power pic.twitter.com/HKGH3JiAHo

Even though Macron won the elections, rival Le Pen's results mark a significant shift in French politics. This is the closest the far-right has ever come to taking power in the country.

As celebrations and protests erupt in a 'polarised' France, we take a look at Macron's political journey, the French politics and what his victory means:

WHO IS EMMANUEL MACRON?

*He worked as a civil servant and later as a banker before coming to politics, reported France 24.

*Macron served as the Economy Minister in Francois Hollande’s government from 2014 to 2016, but decided to start his own political movement, which led to him winning the presidential elections in the country the next year.

*Macron is known to be a liberal centrist with a pro-business mindset. He had left the Socialist government of President Hollande in 2016 to form his new movement La République En Marche. He said that the movement that turned into a political party was neither left nor right wing. 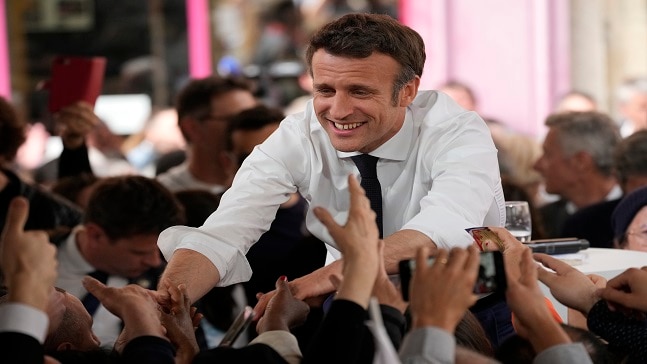 Macron won the French presidential election in 2017 defeating Le Pen. At that time he had won 66.06% of votes to become the country's youngest president at 39.

Before becoming the President in 2017, Macron had never been elected to any public office before. Still in his 30s, he was seen as the face of reform.

*Over his first five years, Macron saw some of the most violent anti-government protests, a pandemic that changed the world, some major tax reforms and much more.

*The Yellow Vest movement, which was started over the hike in fuel prices, was the country's worst civil unrest in 50 years and it challenged Macron's presidency.

*After that, like the rest of the world, France was struck with the Covid pandemic in 2020. This meant that the reforms he had planned had to be put on hold. 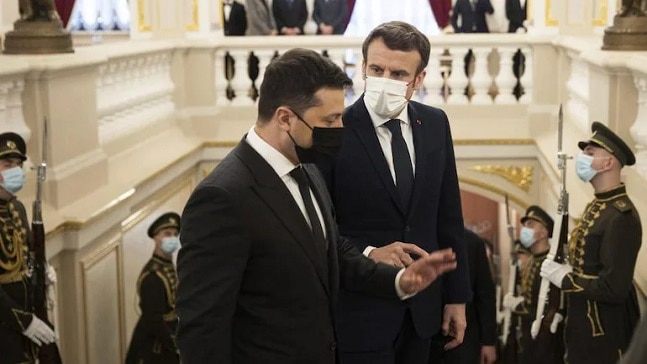 In 2022, when it looked like Covid was finally behind us, Russia invaded Ukraine. Macron has been one of the most vocal world leaders on the issue and has been involved in efforts and meditations to end Russia’s war in Ukraine.

Indian PM Narendra Modi also took to Twitter to wish Macron on his win. "I look forward to continue working together to deepen the India-France strategic partnership," read his tweet.

Congratulations to my friend @EmmanuelMacron on being re-elected as the President of France! I look forward to continue working together to deepen the India-France Strategic Partnership.

US President Joe Biden congratulated the French counterpart and said he was looking forward to "our continued close cooperation".

Congratulations to @EmmanuelMacron on his re-election. France is our oldest ally and a key partner in addressing global challenges. I look forward to our continued close cooperation — including on supporting Ukraine, defending democracy, and countering climate change.

UK Prime Minister Boris Johnson, while congratulating Macron, said that "France is one of our closest and most important allies".

Congratulations to @EmmanuelMacron on your re-election as President of France. France is one of our closest and most important allies. I look forward to continuing to work together on the issues which matter most to our two countries and to the world. ????

Canadian Prime Minister Justin Trudeau, German Chancellor Olaf Scholz and European Council President Charles Michel were among the other leaders who congratulated Macron on his re-election.

ROAD AHEAD FOR MACRON

*In his victory speech, Macron promised a "renewed method" to govern France and said that his next five years would respond to the frustrations of voters who backed Le Pen. "An answer must be found to the anger and disagreements that led many of our compatriots to vote for the extreme right," he said during his address in Paris, reported AFP. *Macron would also be hoping for a less complicated second term. To implement his pro-business reforms, he would like the Russia-Ukraine crisis to end as soon as possible. And being one of the tallest leaders in Europe, he will have a key role in making sure the continent remains peaceful.

*Macron will face a major challenge in the month of June, when France goes for Parliamentary elections, reported Reuters.

#Marinelepen, #France, #Emmanuelmacron, #Frenchelections
The views and opinions expressed in this article are those of the authors and do not necessarily reflect the official policy or position of DailyO.in or the India Today Group. The writers are solely responsible for any claims arising out of the contents of this article.