62 children dead in Gorakhpur: UP government has to explain

A time-bound judicial inquiry is required to probe this entirely man-made tragedy.

The fact that 62 children have died since August 7 at Gorakhpur's Baba Raghav Das Medical College Hospital is a shocking man-made tragedy. It was caused by a long delay in payment to the private medical supplies firm Pushpa Sales Pvt. Limited for liquid oxygen - a critical medicine, especially in the case of children who need an additional infusion of oxygen because of limited lung capacity.

The company’s sales manager at Gorakhpur, Deepankar Sharma, pointed out that “as per the agreement, payments should be made within 15 days, and the arrears should never exceed Rs 10 lakh. Our payment was due since November 2016, and only two partial payments were released (in May and June). However, we continued to supply oxygen for about nine months on humanitarian grounds.

But finally, we did not have enough funds to pay the company from which we source paynents.” Sharma added that “after waiting for about three months, we sent the first the first letter in February 2017.”

According to him, the first payment due was then around Rs 42 lakh and yet Pushpa Sales continued to send reminders - in April, May and June, two in July and August, informing the hospital that it was becoming difficult for the firm to ensure supply from their own funds.

At the time, the total amount due was more than Rs 60 lakh.

UP minister for medical education Ashutosh Tandon, who too was in Gorakhpur, said that the hospital principal, Rajeev Mishra had forwarded the supplier’s August 1 letter to the government, following which money was released on August 5.

The principal had received the funds in his account on August 7, but had been unable to explain why he had failed to release it, Tandon said. 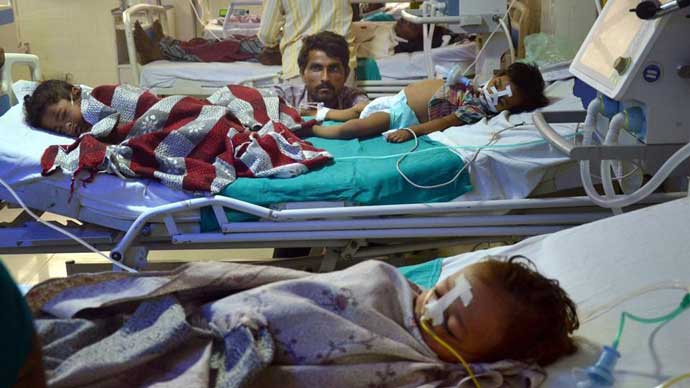 As expected, the UP government played down the tragedy, like others before it. Photo: PTI

Of course, as expected, the UP government played down the tragedy, like others before it.

The UP government claimed that the rate of death of children in BRD Medical College Hospital in the 11 days of August this year was lower than the comparable rate in previous years.

This facile statement in effect is saying that because the deaths of 62 children were less than the comparable number in previous years, they are not unusual.

But the UP government’s statement is shocking. If the BRD Medical College had a consistently horrendous death rate in earlier years, it should have been seriously revamped and subject to continuous oversight. In fact, a time-bound judicial inquiry is required to find out why this medical college had such a high fatality rate among child patients.

This scrutiny should also examine the functioning of BRD Medical College during its previous period of medical care prior to the inception of the Yogi Adityanath government. This is necessary for a non-partisan inquiry and review. At the end of the day, 62 children are dead because of negligence. Their families are grief-stricken. Do the doctors involved follow the Hippocratic oath as enjoined by the medical profession?

#Yogi Adityanath, #Japanese encephalitis, #Gorakhpur
The views and opinions expressed in this article are those of the authors and do not necessarily reflect the official policy or position of DailyO.in or the India Today Group. The writers are solely responsible for any claims arising out of the contents of this article.