The access given by the government to the European Union parliamentarians to visit Kashmir signifies that the ground situation in Kashmir has improved sufficiently to allow the visit of a foreign delegation for an on-the-spot assessment of its own. So far, the government had not permitted visits by foreign delegations and local diplomats. Rightly so, because the government's priority has been to keep a lid on violence in Kashmir, for which many restrictions were imposed, be it on physical movement or communications.

The government's task has not been easy given the violence, separatism, terrorism and Pakistan-promoted jihad that has plagued Jammu and Kashmir for decades.

The authorities could not afford to be distracted from their principal responsibility of maintaining law and order and preventing loss of innocent lives, by having to also provide security to foreign visitors whose descent into the Valley has, going by past experience, incited terrorist incidents to draw international attention to resistance on the ground to Indian rule.

With violence under control, many of these curbs have been lifted. This has given the government space and confidence to allow the first foreign delegation to visit Srinagar.

Pakistan has been hyperactive in its propaganda drive against India on the revocation of Article 370 leading to the supposed massive human rights violations of 8 million Kashmiris under a brutal lockdown by India.

All this propaganda, in which Indian-origin liberals abroad have contributed, has fallen on receptive ears in sections of the political and media circles in the West, principally in the US and UK. These circles have always played down Pakistan's deep involvement in terrorism in J&K. They harbour a strong prejudice against Prime Minister Narendra Modi and view the Rashtriya Swayamsevak Sangh (RSS) with deep distaste.

The fuss they make over internet curbs in the Valley is surprising, not only because it is temporary, but more importantly, their own authorities and societies are cognisant of the role of social media in mobilising violence, the difficulties in grappling with online radicalisation, the spread of fake news and so on. To elevate access to the internet, whatever the circumstances, as a fundamental right, shows how much the human rights pretensions of these lobbies are divorced from reality.

The visit of the EU parliamentary delegation to Kashmir is timely as a counter to this propaganda blitz against us.

The EU delegation will see for itself that any talk of genocide in Kashmir is nonsense, that there is no curfew, and that hospitals are functioning, quite apart from landlines and post-paid mobile phones. 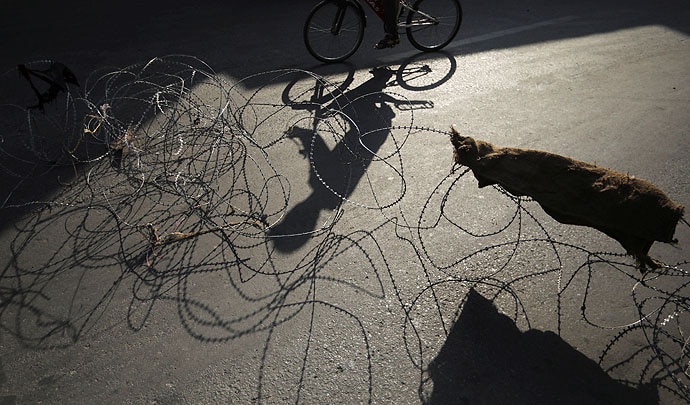 The visit will help EU lawmakers see that the talks of a genocide in Kashmir are white lies. (Photo: Reuters)

They have already interacted in New Delhi with some Kashmiri politicians and those recently elected to the block development councils.

Message to US, UK

Even if their tour of the Valley will be a guided one for security reasons, they will probably hear divergent views. As experienced politicians, they will be able to sift reality from concocted propaganda on Kashmir.

This should help manage parliamentary opinion in the EU which is proactive on perceived violations of human rights across the globe and can take positions at variance with those of national parliaments in EU countries which are more sensitive to bilateral ties with countries exposed to criticism on human rights grounds.

This visit should open the doors to visits by US Congressmen and foreign diplomats. The latter are stationed in New Delhi, interacting with politicians, officials, opinion makers in the media, think tank and academic circles and, already, have some grip on the realities of the situation. Dealing with US Congressmen - of the sort who would demand to visit Kashmir — is more difficult, as they are generally negatively inclined towards India.

The implication of a US Congressional visit is also politically different because of Pakistan's efforts to encourage US intervention in Kashmir. More caution is needed in allowing such visits.

No politics on J&K

In any case, they have been chosen by the European electorate and why should we show disrespect to the democratic electoral process in Europe? If these were left wing parliamentarians, how and why would that make them more welcome and acceptable?

They haven't come to do opposition politics, pronounce on the rights and wrongs of Article 370's nullification, mould public opinion in this or that direction, make public criticism of government policy, raise the issue of the plight of the Kashmiris vocally, accuse the government of mismanaging the situation in Kashmir, violating the promises given to the Kashmiris on autonomy and so on. Also, do our parliamentarians want a guided tour of Kashmir? The doors to their visits seem also to have been opened in principle by the visit of the EU parliamentary delegation.