Why EVM tampering allegations are baseless

The source code of the machine is written by in-house engineers of BEL (defence ministry PSU) and ECIL (atomic energy ministry PSU).

The Karnataka High Court in the famous 2004 judgment on EVM tamperability held that "this invention is undoubtedly a great achievement in electronic and computer technology and a national pride".

There have been five high court judicial pronouncements since 2000 rejecting the possibility of tampering of EVMs, and terming allegations as "misplaced and misguided". However, recent allegations of the same by Delhi chief minister Arvind Kejriwal, post the loss of Assembly elections in Goa and Punjab, are not just misplaced and misguided, but also an insincere strategy by an anti-establishment functionary to confuse the voter.

Conduct of free and fair elections is the basic tenet of a democratic Constitution. India has been fortunate to have a robust, transparent and independent Election Commission vested with constitutional powers of superintendence, direction and control of elections under Article 324.

The Constitution-makers envisaged the commission to be independent of the executive in discharge of duties. This independence is reflected in giving the Chief Election Commissioner a position paralleled by a judge of the Supreme Court.

In this context, any concern or claim made against such a body by a leader holding a public office should be a sincere attempt based on preliminary evidence.

The allegations raised by Kejriwal can be bracketed into two broad points:

- The software of EVMs can be tampered to vote for the BJP.

- Incidents of tampering in Dhaulpur, Rajasthan, and Bhind, Madhya Pradesh.

Can EVM software be tampered with?

The simple answer is no. The Indian EVM machine used by the Election Commission is a one-time programmable device not connected to any external wire, computer or internet, and does not receive any input signal.

The source code of the EVM is written by in-house engineers of BEL (defence ministry PSU) and ECIL (atomic energy ministry's PSU). The source code is so designed that it allows the voter to cast the vote only once.

In between, the machine becomes dead to any signal from outside except the control unit, which can only be enabled by the presiding officer from the ballot unit.

The comparison made with EVMs from other countries is incorrect because the machines used elsewhere are either a computing or wireless device having provisions to receive input signals. This is not the case with the Indian EVM. 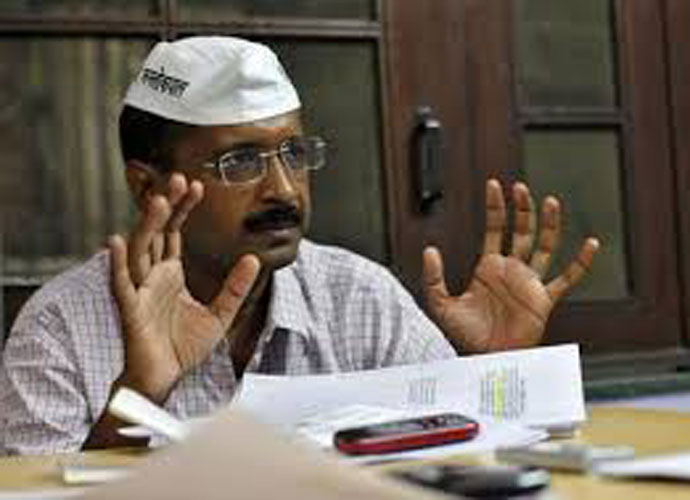 The allegations raised by Arvind Kejriwal can be bracketed into two broad points. Photo: Reuters

In order to hack a device it is necessary that a provision to insert a hacking code is there in the device. The Indian EVM only has a source code made by the defence and atomic PSU engineers, and undergoes a first-level check in the presence of political party representatives before being used.

At least 1,000 votes are cast by representatives of political parties in 5 per cent of EVMs randomly selected by them. This administrative, technical and security diligence makes tamperability almost impossible.

The technical evaluation committee in 2006 ruled out tampering of the EVM control unit by Bluetooth or WIFI as it does not have a high frequency receiver (in order to tamper with it, any output wireless signal should be in the same frequency range as input), and the control unit receives specially encrypted dynamic codes from the ballot unit. Even the Madras High Court pronounced in 2001 that "there is no question of introducing any virus".

The case of Dhaulpur and Bhind

The allegation of rigging in the Dholpur by-poll and Bhind episode is another misdirected arrow. Dholpur is not a case of tampering but a slag in two of 239 EVMs with no report of an incident pointing towards miscount in output votes.

Further, conducting rural and urban local body elections is not the constitutional mandate of the Election Commission.

In the case of Bhind, the EC is within law to order VVPAT (voter-verified paper audit trail) from UP. The VVPAT is just a machine which prints paper slips of the votes recorded. It has no relation with the EVM and in no case can affect the input signal in the machine when it has none.

Does it point to a well thought-out strategy?

Yes. Observing the politics of Kejriwal since the beginning, he has moved from being positioned as an anti-establishment public leader to a leader reflecting anarchist tendencies. The people of Delhi had voted him in with a historic mandate to govern.

Unfortunately, in his quest for power he has tried to confuse voters and divert attention from the promises in Delhi and loss in Goa and Punjab. Moving towards ballot papers is regressive.

The Constitution does not prescribe mainstreaming anarchism, which the Kejriwal is trying to do. HM Seervai, noted jurist, said the responsible conduct of members holding public offices, particularly legislature, is critical to reflect the principles of the Indian Constitution. It is time the Delhi CM heeds this advice. Do not forget, the Indian voter is smart.

Post your comment
#Arvind Kejriwal, #EVMs
The views and opinions expressed in this article are those of the authors and do not necessarily reflect the official policy or position of DailyO.in or the India Today Group. The writers are solely responsible for any claims arising out of the contents of this article.

The writer is the Founder-CEO of Jan Ki Baat.