The Aam Aadmi Party (AAP) has suffered yet another defeat even as a winning BJP improved its previous tally in the MCD elections.

The defeat becomes more crushing for the AAP because the BJP managed to win despite having to face anti-incumbency of 10 years.

This defeat adds to AAP's continuing travail in electoral outings, having suffered humiliating defeats in the Punjab and Goa Assembly elections, Rajouri Garden (Delhi) by-election (which it had won in 2015, but lost to the BJP in 2017) and the Delhi SGPC polls.

These failures should have been more than enough to make the party reflect on its losses and make amends. Yet, all that the AAP has managed to do is blame the EVMs. 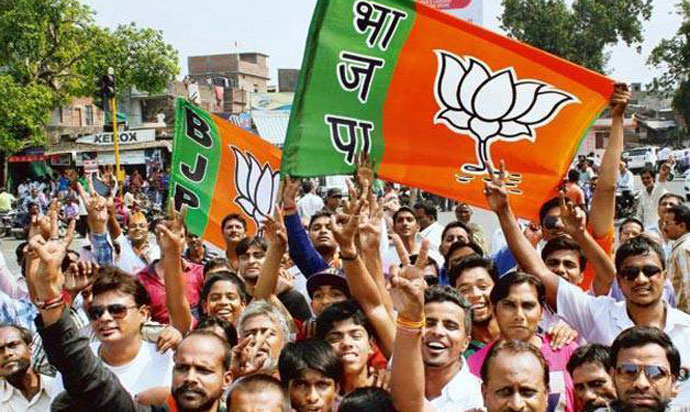 The defeat becomes more crushing for the AAP because the BJP managed to win despite facing anti-incumbency of 10 years.

These allegations of EVM tampering by the AAP look more like an excuse to save the the top leadership from any accountability.

To begin with, the AAP's charges against EVMs sound nothing but silly excuses by a sore loser. If the AAP really had no faith in the EVMs, it should have stated so when the same EVMs delivered a resounding victory for the party in the 2015 Delhi election.

Even in its debut Assembly elections of 2013, the AAP revelled in the verdict captured through EVMs. But when the same EVMs reflect the voters' disillusionment with the party, then the EVM's become the culprit?

The AAP still had a chance to proof its sensational allegations about EVM-tampering with credible evidence. Yet the party has only been able to provide disputable evidence which can't be taken to be reflective of large-scale tempering.

In absence of undeniable proofs of systemic malfunctioning, the layers and layers of safeguards in the election process are hard to ignore. Let's take a look:

1.The source code of the EVM's software is not handed to any outsider and is burnt into a one-time programmable chip that can't be altered.

2. Before machines are allocated to the constituencies, representatives of all parties and candidates are invited and the machines are tested in the presence of the candidate or party agent. All those present have to sign a certificate that the EVMs are in order.

3.The allocation of machines to constituencies and then to polling stations are done at random by using a computer programme.

5. The position of a party candidate in EVM is decided alphabetically (going by the candidates' names, position in that state's official language, thus ensuring candidates of the same party also have different position in EVMs of different constituencies). Further since candidates are often decided at the last moment, its improbable that anyone could guess the correct order of candidates on the EVM across constituencies much in advance.

Moreover, indicators of popular mood too don't lend credence to the AAP's EVM-tampering allegations. Here's how:

1. Most post-poll and pre-poll surveys predicted a loss for AAP. The results are in fact better than what the voters' survey indicated.

2. Anecdotal evidence point to middle-class disillusionment with the AAP's constant high-decibel politics as also its perceived focus on the poor.

In a city like Delhi, where the middle class plays an important role, such disillusionment is ought to prove politically costly. The AAP should realise this at least after the MCD election results. Similarly in Punjab, the AAP had been on a decline after its peak of Maghi rally. The question is what brought about this decline/disillusionment?

3. If the voters of these places really felt that the EVMs have been manipulated and so is their verdict (especially on a large scale as large as the AAP is alleging), the voters would have mobilised against the verdict. But they didn't, indicating that it's only the AAP who is surprised by the verdicts, not the voters.

No one but the most-devoted of AAP's supporters would buy such excuses.

The AAP's efforts in blaming the EVMs look insincere too. The party has not been able to provide any major evidence apart from allegations. Thus, it seems a rather disgusting attempt to play with the trust of those who support the AAP whole-heartedly.

The AAP mustn't forget that attempts to perpetuate unwarranted suspicion among voters in a democratic process could be very dangerous for the democracy. A democracy thrives only when political opponents agree on a basic framework, learn to respect the mandate of the people and ensure smooth transfer of power.

If the party continues to spread mistrust in the process of election instead of gracefully accepting the people's verdict then, it may create a dangerous trend where parties will increasingly question poll verdicts and refuge to abide by the democratic will.

The reasons why the AAP has been continuously levelling such allegations is that it helps the party's top leadership save themselves form answering tough questions about the failure in their strategy and execution. Has the party implemented any large-scale internal restructuring?

The AAP has had a poor run during elections, but has the party implemented any large-scale internal restructuring?

Has there been any major leader who has faced the axe?

The party must ponder upon the question — if the AAP is performing poorly, someone must be responsible for it? Have they tried to identify the causes (even after so many weeks of Punjab debacle)? The answer is no.

Instead the party has chosen to live in denial, it is trying to deflect its supporters disappointment away from its leadership and blaming the electoral process (through this allegation of EVM tampering).

Sadly, the more AAP continues to walk down this path, the more unlikely it will ever embark on course correction.

There is an adage — I found my success, when I lost my excuses. If the AAP wants to keep its hopes alive, it will do well to drop the excuse of EVM tempering sooner than later.