Why the farmers' agitation is an internal matter of India

India is a sovereign state and has the capabilities to solve all its internal matters tactically to ensure peace, security and prosperity for all its people.

It is well understood that democracy provides ways for agreements and disagreements. It allows people to exhibit their discontent on any matter taught and demonstrated by the father of nation, Mahatma Gandhi, through Satyagraha; peaceful and non-violent.

Farmers agitation with some ups and downs has been on in the country for a couple of months peacefully and non-violently. It has been the centre of discussion and debate in the country getting significant support from people as well.

However, it has been in the controversy since the incident of Republic Day of India for which it got censure from many sections of the country. Now it is souring at different levels with the overnight popularity when it was dragged into the international media after Rihanna, a famous singer who has over 100 million followers worldwide, tweeted regarding farmers protest. Her tweets followed by a series of tweets from Indian and international celebrities including American actor Amanda Cerni, US Vice President Kamala Harris' niece Meena Harris, Ugandan climate activist Vanessa Nakat and climate and environmental activist Greta Thunberg proved to be a catalyst in drawing the attention of international media. 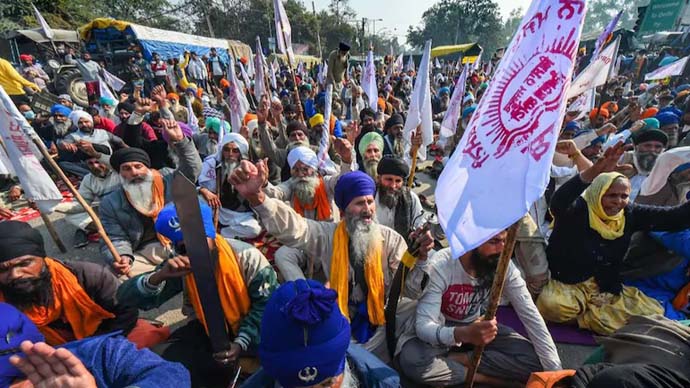 The agitating Indian farmers would not have thought that their protest would reach to the international media. (Photo: PTI)

The agitating Indian farmers would not have thought that their protest would reach to the international media. Besides, Indian celebrities, Kangana Ranaut’s role cannot be denied in amplifying the issue by claiming that the protests are a plot to make India “a Chinese colony much like the USA".

Further, the response from the Ministry of Foreign Affairs emphasised that these protests must be seen in the context of India’s democratic ethos and polity, and the efforts of the Government and the concerned farmers' groups to resolve the impasse. The ministry further emphasised that the facts be ascertained before rushing to comments on such internal matters and a proper understanding of the issues at hand be undertaken. It was strongly reiterated that the temptation of sensationalist social media hashtags and comments especially when resorted to by celebrities and others is neither accurate nor responsible.

The Union Home Minister Amit Shah intensified the debate of interference in the internal matter of India by tweeting, "Propaganda cannot decide India's fate only 'progress' can. India stands united and together to achieve progress."

India is a sovereign state and has the capabilities to solve all its internal matters tactically to ensure peace, security and prosperity of the people. Indian democracy is highly matured and deeply rooted no one can show a candle to it. Indian’s unity, piety and sobriety have been a model to the world which have been exhibited by Indians across the world. For example, Saudi Arabia has around three million Indian expatriates in the Kingdom and they are like a model for the expatriate’s community from the other parts of the world.

People do have their differences, and have some black sheep in the country, for that the whole nation cannot be stigmatised. India as the largest democracy of the world with the best constitution does not need any advice or method from international celebrities to solve its internal matters. It is noteworthy that the principle of non-intervention in the international law signifies that a state should not intervene in the internal affairs of other states. Therefore, if the states are not permitted to intervene, there is no question of any citizen of another state interfering in the affairs of other states. People from a foreign land, may express their views and write their concerns but through proper channels. Expression of views on Social media cannot be taken as granted and be treated like entertainment and frivolous activities.

This is a miracle that after independence, how India has consolidated its economy, weaved social fabrics, and infused the spirit of democracy in the country in seven decades. This needs to be reiterated that the British East India company established during the 18th century and ruled over two centuries because of their divide and rule policy. Having said that encouraging outsiders to get the internal matters solved is like opening doors for every other random person. This needs to be denigrated univocally. Before rushing to support and encourage the external temporary and perhaps vested social media support one must have faith and trust in the Indian constitution and its government.