P Sainath explains why our farmers are so angry

P Sainath is easily one of the most renowned public figures and most respected of voices on the agrarian issues staring us in the face. From farmers’ suicides to debt crisis, the politics and economics of loan waivers, the impact and efficacy of MGNREGA in the UPA and NDA governments, the effect on the new cattle slaughter restrictions, impact of demonetisation, and a number of other topics related to the rural economy were addressed by the eminent journalist with an encyclopaedic understanding of the problems, in a video that he recorded for his organisation, the People’s Archive of Rural India.

The immediate context of Sainath’s public address is of course the loan waiver green signal issued by Maharashtra CM Devendra Fadnavis, who had famously enough vowed earlier that he wouldn’t even meet the agitators, who he said were not even genuine farmers, let alone give out a loan waiver amounting to Rs 35,000 crore. The preceding context is the extremely distressing incident in which five farmers were killed in police firing in Mandsaur, Madhya Pradesh, the casualty from which rose to eight, as the state CM, Shivraj Singh Chouhan, sat on a “peace fast”.

Sainath addressed a number of concerns doing the rounds in policy and political circles, as well as in media and social media circuits, on the root of the farmers’ debt crisis. We bring to you in brief the important points that he raised in the talk.

On the farmers agitation and government apathy

Sainath said that the unrest in Maharashtra started out in Vidharbha, Marathwada, which saw prolonged drought, but spread to relatively prosperous areas of Nashik and western Maharashtra. But the disparities in what the government was trying to project via its advertorials in major newspapers contrasted sharply with the front pages of those dailies which carried the news of the Mandsaur killings.

While PM Modi and FM Jaitley announced that they would double farmers’ income by 2022, the head of the GoM to look into that was MP CM Shivraj Chouhan whose state saw the police firing on protesting farmers and illegal detentions.

Sainath suggested that we mustn’t try to approach the agrarian situation through TV news, events, bogus figures in the government ads and the spectacular episodes of violence, but through the lived lives of the farmers, narratives that are buried and not heard, voices that are drowned out in TV studio debates. Sainath said that what teh farmers have been driven to do, perform antics in front of camera, are to draw attention to their miserable condition: those events are mere manifestation, symptoms of the deeper malaise of what’s ailing them.

Framers, agricultural labourers, migrant labourers, those dependent on farming – it’s only through their lives that we can understand what’s really going on, and not through empty figures and massive billboards hailing the government.

Not just about loan waivers

Loan waivers, including the 2008 one under the UPA government, are mere tools, temporary relief, not real solutions or transformation, said Sainath. In fact, implementation of the MS Swaminathan Commission’s report on the agrarian crisis, which suggested giving as remuneration cost of production plus 50 per cent to poor and deprived farmers, was in the 2014 BJP manifesto, but nothing has been done so far. In fact, an affidavit was submitted soon after the BJP came to power saying that the Swaminathan report cannot be applied.

Even the 2008 loan waiver comprising about Rs 50,000 crore, didn’t reach the bulk of farmers who don’t have access to bank loans and credits, and mostly borrow privately from local lenders and at extremely high interest rates. In whose name was the loan waived then? Who took the benefits? 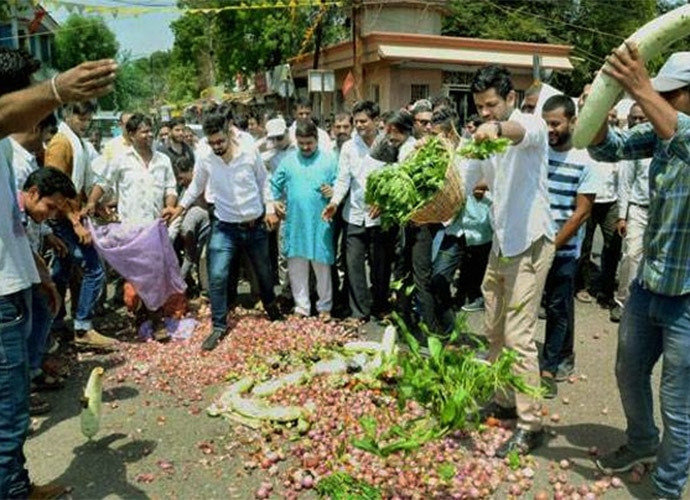 Also, governments write off loans worth lakhs of crores of rupees every year, and this impacts just 1 per cent of the population. So why the hypocrisy when it comes to farm loan waivers, which affect 45 million families, forming 40 per cent of the population? Credits meant for the small and marginal farmers have been diverted to large businesses and corporations. Where does the money come from in those instances?

On soaring input costs and effect of liberalisation

In the name of market-based pricing, the government has allowed the cost of production to soar, without keeping them in check. Every government – from UPA under Manmohan Singh and P Chidambaram, to NDA under Modi and Jaitley and the CMs – has neglected the agricultural sector, allowed the corporations to run amok.

From the price of seed to fertilisers, pesticides, etc., seeing cost increasing at 700 per cent, the impact of liberalisation has been chiefly borne by India’s agricultural sector. So, it’s not the farmers’ income but it’s the liabilities on him/her that’s actually gone up, because of rising cost of agricultural inputs. Also, while nominal income might have slightly gone up, real income has actually fallen.

Reforms favoured the corporations and robbed the small farmer of benefits, leaving them at the mercy of “market forces”, which were always in tune with the biggest players in the agricultural sector, using mechanised farming. Also, minimum germination rate in seed packets was lowered from 85 per cent pre-1991 to 60 per cent, something that only big farmers could afford to invest in, while the poor suffered heavy losses.

This astonishing skyrocketing of the prices led to what Sainath calls the “loot and grab sortie” among agro-corporates and MNCs while the poor farmer stagnated as far as the prices are concerned.

We also need to do a serious assessment of what is the cost of production, and whether it includes expenses such as medical, kids education, as well as factors in rising inflation. Studies have shown the price that the farmers are getting, even in the government estimates, are lower than the cost of production. This needs to change.

The governments have opened the floodgates by getting into GM mustard (genetically modified), Sainath said. This is science for rent, as massive PR machinery is put to use to spread misinformation about the efficacy of either BT Brinjal, or GM mustard, while the SC-appointed committee of finest scientists themselves warn of the consequences of getting into this and demanded decades of moratorium on the issue.

Organs of the United Nations have already conducted exhaustive studies demonstrating that the GM crops claims are bogus, especially as 70 per cent of the world’s food still comes from small farmers produce, and not corporate agriculture, even though it’s highly subsidised.

Is there a larger game-plan to push out small and marginal farmers to make way for corporates in Indian agriculture? Yes, of course, Sainath says. While governments have been flaunting how many have left agriculture to join the urban stream, almost 15 million in 10 years, the fact that there are no jobs to compensate for the daily 2,000 daily leaving farming, hasn’t been addressed by any regime so far.

Critical of both UPA and NDA

Sainath said that he has been far more critical of the UPA government under Dr Manmohan Singh and Union agriculture minister Sharad Pawar and the Congress CMs in the states like Maharashtra, such Ashok Chavan, and no one can accuse him of having a vendetta against the Modi government.

Sainath said that it’s important for journalists to be critical of policies and not individuals per se, and no favouritism should be shown while analysing regime’s failures on those issues. In fact, Sainath says, there hasn’t been big difference in the policies of the two regimes, and therefore the criticisms are as valid as ever.