Today marks the Nth feint of the LGBT community in its attempt to decriminalise homosexuality. Despite some stellar work and dogged persistence, the moment begs the question — why has the community’s fight for decriminalisation taken so long in a society that can arguably be classified as one of the most open to same-sex relations, historically and in modern times, socially least violently opposed to it in the Third World? 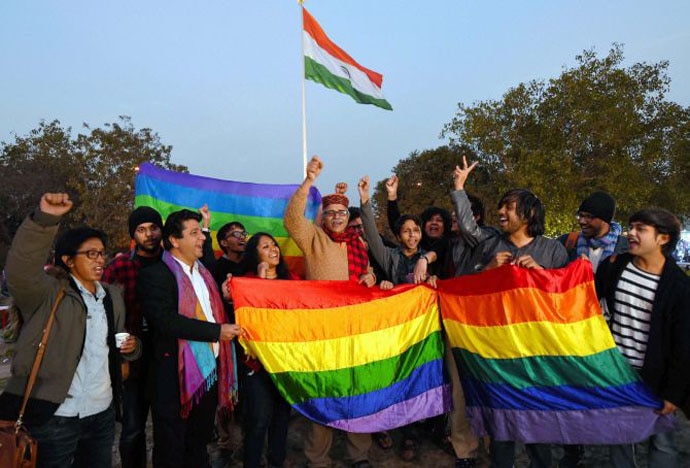 Say it with Pride: India is not intrinsically against gay rights. (Photo: PTI/File)

The answers are tough and should force the community to introspect. The replies relate mostly to tactical clumsiness, placing hope in quixotic feints that never stood any chance of success and allowing itself to be hijacked by a “community leadership” that is heavily political, lives in grandstanding, seeking 15 seconds of TV fame, conflating publicity with achievement.

One should not overlay all of these issues on just one set of people, each of these described being different clusters — but clusters that come together in one toxic whole that have considerably set back community efforts.

To understand this, we have to separate two linked but related issues — the anthropological and the legal.

To understand what is wrong with the approach, we need to first understand the anthropological patterns of how the acceptance of homosexuality works in modern states. Inevitably since the 1700s, this has followed a sequence — first, normalisation, then decriminalisation, then guarantee of equal rights and finally, special protection/affirmative action. It took a Revolution: In Russia, decriminalisation of homosexuality happened only post-1917. (Photo: Wikimedia Commons)

In these cases, there are two distinct strands. Where decriminalisation happened peacefully, it happened late — and where it was enacted before society was ready for it, it happened in a fit of violent revolutionary fervour.

In India, thankfully, despite the fact that we are not an industrialised state, society has never seen violent homophobia.

Clearly then, the social conditions for decriminalisation are ripe.

The problem, however, comes about by the overt political twist of the Gay Rights movement, largely owing to the malaise of intersectionality. What this means is that gay rights gets clubbed together with a whole bunch of issues where society is much more polarised — these issues include how to deal with Naxals, terrorists in Kashmir and their B-team, the stone pelters, as well as the urban “tukde tukde” gang.

Herein lies the first big tactical blunder of the gay rights movement — in search of mythical allies in the fight against a mythical enemy, they have instigated opposition across the board by making common cause with the same people that approve of throwing gay people off roofs or hanging them from cranes, against a dispensation that, while not sympathetic to them, is horrified at the thought of violence carried out against the community. Moreover, the conflation of everything, from normalisation to special protections, which, in anthropological terms, took the West 250 years, is sought to be compressed into a timeline of 10-15 years. While nobody can deny the demand is just, there are tactical issues that must be considered here.

This masochistic path of generating “maximum resistance” has been taken to legal extremes as well — and has resulted in the loss of much goodwill, not to mention time, treasure and effort. All one needs to do to decriminalise homosexuality is to simply get a Supreme Court directive saying: “consensual sex does not come under the purvey of 377”. Yet (and I would like to stress some of the smarter lawyers on the LGBT side have avoided this trap) a large portion of the argument rests on getting rid of IPC 377 altogether, something no court can legally do — overturn a code enacted by legislation.

Indeed in keeping with the 1st Amendment to the Constitution and practiced in jurisprudence, when security has collided with human rights, courts have more often than not chosen security over the individual.

This was compounded by a well-intentioned but entirely futile effort by Dr Shashi Tharoor seeking a constitutional amendment legalising same-sex relations, when, in fact, there was no need for such an immense squandering of effort, for a goal that could have been achieved for a far lesser price. Look, I tried: Shashi Tharoor has pitched in too. (Photo: PTI)

Rights are per se a legal fiction, as is the law. Pitting fiction against fiction is never a good idea, and from day one, the focus should not have been human rights which, though great for 15 seconds of fame, really bear no legal traction. Instead, the focus from day one should have been what the current team has finally settled for: a reading down of 377 on the basis of science as no single scientific body is willing to say that same-sex relations are unnatural anymore. Moreover, given that a particularly destructive feminist lobby ensured that the post-Nirbhaya case rape laws were made female-specific, 377 provides the gay male with the only legal recourse against rape in addition to the laws related to assault.

All of this is water under the bridge and nothing can be done about this now.

The point is, irrespective of where the judgement of the Supreme Court goes, the LGBT movement needs to do some serious introspection on its severe missteps — chronic politicisation, publicity-seeking and tactical blunders which, to quote that great Frenchman Talleyrand, “are worse than crimes”. In short, a mountain has been made of a molehill and we await results that could have been achieved a lot quicker, with a lot less effort.What should however be acknowledged is that whatever has been achieved has not been achieved in some heroic fight against the state — but with much tacit approval and help of a fundamentally benign state, whether one chooses to admit that or not.

Also read: Why the BJP-led Centre won't clarify its view on Section 377 in Supreme Court