Why is India murdering its fishing cats?

The feline is rapidly losing ground, and we need to act now if we are to protect it.

It's a terrible introduction to a charismatic species that few know about: the fishing cat - bigger, stockier than the average tabby, way smaller than another better-known felid, the tiger; nocturnal, elusive, and accorded the highest protection by the law of the land that lists it as a Schedule I species.

The protection, though, is merely on paper.

On June 5 (yes, the same day we "celebrate" as the World Environment Day) this year, five fishing cats were brutally killed by poachers West Bengal's Howrah district. The photographs speak for themselves - while in one the dead cat is held up as a grotesque trophy, in another, it seems the feline is being prepared for being beheaded. 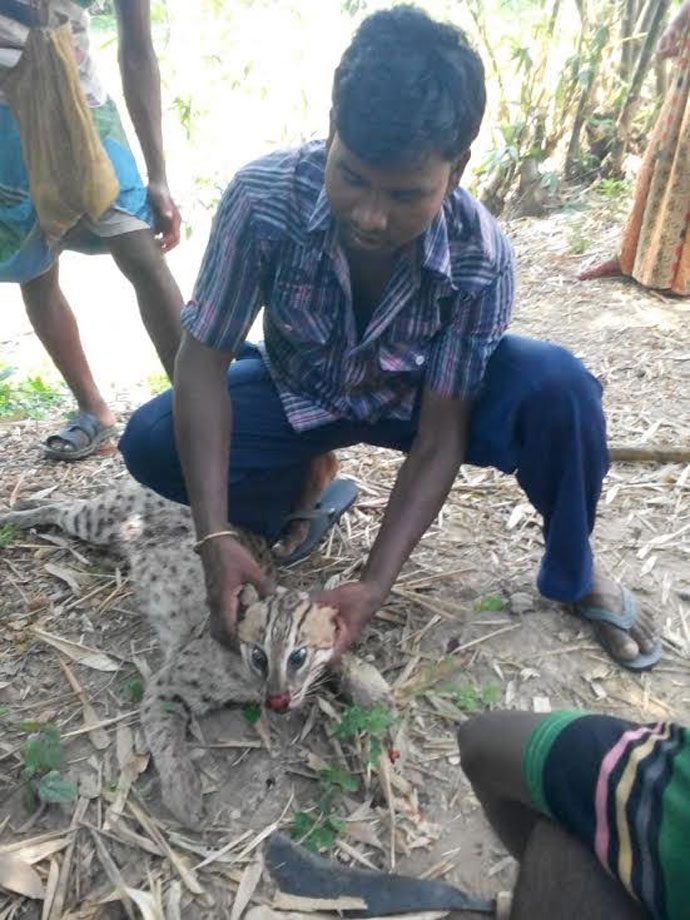 This incident took place in Uluberia subdivision's Munsirhat area in the Howrah district, and the motive appears to be for game (the meat makes a meal) and skin. The fishing cat is also the state animal of West Bengal. It is not the first time this has happened; a study conducted by Tiasa Adhya, a postgraduate student from the National Centre for Biological Sciences, Bangalore, documented 27 fishing cats being dead within the span of 18 months from the same area. Some were poached, most were killed as retaliation. The fishing cat is a creature of the marshes and wetlands - which are defined as "wastelands", and therefore lack any protection, and are the first to get the axe to make way for construction and development projects. In West Bengal alone, there has been a 44 per cent decline in marshlands in the last two decades.

Howrah, with its cultivated reeds and natural reeds, or marshlands and water bodies, was a stronghold of the fishing cat. Over the past few years, and particularly given its proximity to Kolkata, Howrah has seen a massive change in land use, with wetlands and marshes drained, destroyed and paved to make way for industries, brick kilns, malls, schools, residential complexes and so on. As the fishing cat's habitat shrunk, so did its primary source of food - fish - pushing this shy cat to prey on poultry, for which it is killed in retaliation. In 2012, when workers were draining and levelling wetlands in Howrah, they came across a fishing cat, hidden, crouching under some reeds. It was beaten to death.

It is not just poachers who are killing the fishing cat. It is also our policies, and rapacious, unplanned development which rarely factors in ecological and social consequences.

Fishing cats are beneficial to farmers because a large part of their diet comes from agricultural pests like rodents. Besides, they are the umbrella species of wetlands and marshlands which recharge ground water, and provide sustenance and livelihood to local people.

The fishing cat is rapidly losing ground, and we need to act now if we are to protect it.

Most fishing cats exist outside protected areas, and are thus very vulnerable, lacking even the barest of protection. Uluberia subdivision in Howrah, where this horrific incident occurred is one of the few remaining areas where these cats exist. In the short-term, it is important that poachers are brought to book, and steps taken to form an effective force for strict vigil, and protection of the species. Simultaneously, one needs to educate the locals about the importance of conserving the fishing cats, and involve them in monitoring and protection. Equally important, both at the central and the state levels, is to define wetlands and marshlands in a manner that upholds them as important ecosystems.

#World environment day, #Poaching, #Animal Cruelty, #Fishing cats
The views and opinions expressed in this article are those of the authors and do not necessarily reflect the official policy or position of DailyO.in or the India Today Group. The writers are solely responsible for any claims arising out of the contents of this article.