Why floods in Assam and Bihar are worsening over time

Prevention efforts should be directed towards working in sync with nature.

The Brahmaputra has been called a nada (a male river) in Indian tradition. Here's why.

Brahmaputra, the lifeline of Assam, is an antecedent river, older than the Himalayas. With steep gorges and rapids in Arunachal Pradesh, the river entering Assam becomes braided- at times 16km wide - and with tributaries creates a flood plain spanning 80-10km and 1,000km in length in what is known as the Brahmaputra Valley, says the Assam State Disaster Management Plan.

One can easily imagine the span of devastation when Assam is hit by the annual floods, a phenomenon unabated for centuries but, sadly, the destruction witnessed has increased in the last few decades.

Already more than 30 people have lost their lives and media reports say over 300 animals, including 221 hog deer and 21 one-horned rhinos, died in the floods at Kaziranga National Park (KNP) alone.

As on August 1, 2016, more than 11 lakh people and more than one lakh hectare of land have been affected in 21 districts.

Infrastructure has taken a hit, with roads washed away or rendered ineffective due to floods, according to the daily flood report issued by the Assam State Disaster Management Authority (ASDMA).

About seven per cent of land in Assam's 17 riverine districts has been lost because of river erosion over the last five decades, the disaster management plan tells us. 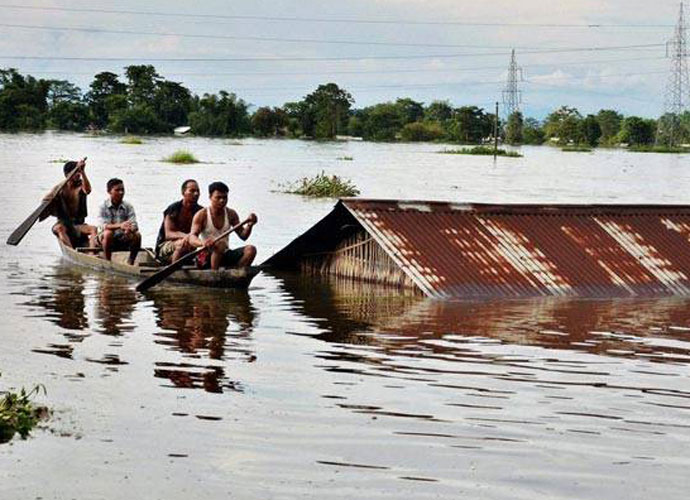 The destruction caused by floods has increased in the last few decades.

The increasing damage each year has equally to do with human activity, including faulty planning, as with rapid changes in climatic conditions.

"The floods are caused by the runoff of extremely heavy rainfall during the monsoon and high sediment loads from upper watersheds that are geologically unstable and degraded because of deforestation and changing land use. The flood combined with river erosion has significant impact each year," says the document.

The situation in Bihar

Almost 60 people have been reported dead due to floods in Bihar, which have affected 29 lakh people across 12 districts. Fed by heavy rains in the Terai region of Nepal, most rivers in the state - mainly Ganga, Ghaghra, Mahananda and Bagmati - are flowing above the danger mark.

A major difference between the Himalayan rivers flowing towards Bihar and other parts of Himalayas such as Uttarakhand is that these rivers originate in the highest regions of the Nepal Himalayas and, crossing very small distance, rapidly reach the plains of Bihar, making them far more forceful.

In Uttarakhand, the rivers descend gradually from relatively lesser Himalayan heights and travel much longer before touching the plains.

Bihar's Flood Management Information System tells us that as much as 76 per cent of the population in the state's north lives under recurring threat of flood devastation, with about 68,800sqkm of total geographical area of 94,163sqkm (almost 73.06 per cent) being flooded almost annually.

Many areas of Bihar traditionally had what was called - is rather still called - chaurs, a natural depression to be used as a natural detention basin for flood water that can be utilised later in the year. These chaurs actually helped lessen the intensity of floods.

But over the years, rapidly increasing population, rising urbanisation (leading to greed for land for houses, infrastructure or agriculture) and faulty planning without taking into consideration the natural contours of water flow, have meant almost nil water storage, which leads to greater than before flooding, which in turn leads to more destruction. 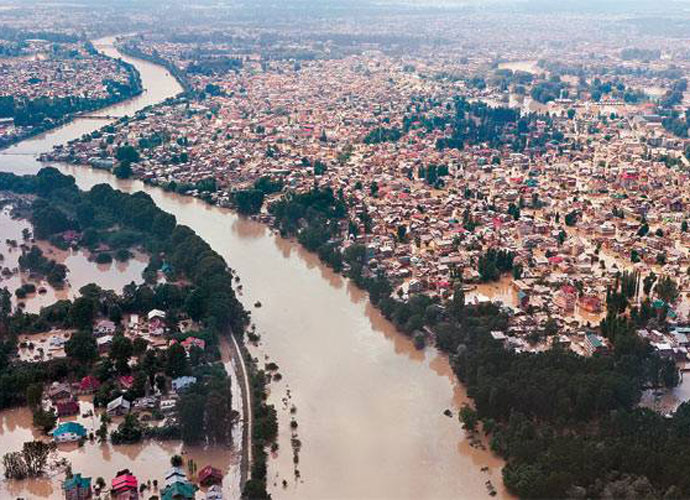 Almost 60 people have been reported dead due to floods in Bihar.

There has been no dearth of funds for the "flood management programme", as the government calls it.

For instance, according to statistics maintained by the Ministry of Water Resources (MoWR), as much as Rs 751.37 crore was spent in Assam and Rs 891.15 crore in Bihar during the XI and XII Plan period up to March 2015. Before that, the count goes into thousands of crores.

A lot of work is being done otherwise too. In fact, technology has enabled preventive/post-flood relief measures, especially in Assam. Construction of raised platforms is one such exercise in Assam, and the state disaster management website gives locations of such raised platforms and community halls in each district.

A few years ago, a satellite image-based "flood hazard map" was prepared for literally each and every one of the 250 revenue circles of Assam's most vulnerable flood-prone tehsils.

"The revenue department identifies flood prone areas using the map, and on the available government land in villages, at times one or two bigha, a raised platform is built under the MGNREGA. People gather on these platforms with livestock and can be rescued," says Mirza Mahammad Irshad, project manager (response and recovery), ASDMA.

But this is bound to happen. Floods can't really be stopped, neither in Assam nor in Bihar.

These include building new embankments or upgrading existing ones and carrying out river bank protection programmes, complete with sluice or canals.

Authorities have also carried out flood risk mapping; year by year, flood warning systems are improving and the response systems too.

Damming a Himalayan river may bring temporary succour but in the long term, knowing well the fragile Himalayan geology, prone to earthquakes and landslides, these are not the correct solutions.

If a dam breach happens, the resulting flood would be far more devastating.

So what is missing?

Two important things stand out: lack of information at the grassroots level and the attitude of policymakers, and to some extent people too, towards dealing with floods.

Assam has pretty much improved the information network at the ground level, but population explosion brings in the compulsion to risk lives for a few weeks of floods by living right at the river bank.

But in Bihar, information outreach is inadequate. Large scale migration from these districts means it is mostly women and the elderly who are left to deal with day-to-day situations and modern signals such as early flood warnings fail to reach this segment.

In north Bihar, embankments have caused increased instances of flooding, if not because of actual rivers spilling over, then because of accumulation of rainwater and river backflow in between the embankments.

Despite that, people have survived these floods for years. "Should we not define different kinds of floods so that we can identify and work on different kinds of responses?" asks Eklavya Prasad of Megh Pyne Abhiyan that works in north Bihar for sustainable water management solutions.

Also read: Uttarakhand cloudburst: Has the state not learnt any lessons from 2013?

Anupam Mishra, environmentalist, author from Gandhi Peace Foundation, has always said how people in Bihar never looked at its rivers in spate as "disasters".

"Centuries of wisdom had taught them how to live with the floods. The rivers' silt would bring in fertile soil that would enrich their fields after the water receded. Dams actually changed this. Embankments were constructed without considering the natural flow of the river. These did not prevent floods but instead added to the problems," Mishra, who had written an eye opening commentary, on the Bihar floods, told me.

The community was never dependent on the government and mostly managed their own lives before the British came in the picture.

So the flood preparation would start beforehand and due diligence was done each year as part of mitigation, as against the last minute after-flood measures taken by the modern-day governments.

Ditto, says a friend who runs an NGO for improving rural livelihoods in Assam. "Traditionally, Assamese people never built houses right near the river bank. Moreover, houses anywhere near the river would necessarily be stilted. Now with increasing demographic pressure, every single inch of land is occupied - by houses, kutcha makaans and what not. Naturally, the damage is more."

Living with the rivers - however mighty they may be - was an art the riverine population had learnt. And indigenous knowledge about hazards and disasters helped them.

Instead of just pouring in more and more money every passing year, rather than creating infrastructure, how many of our policymakers are ready to integrate environmental indicators and localised solutions into disaster management and mitigation planning?

#Bihar, #Assam, #Floods
The views and opinions expressed in this article are those of the authors and do not necessarily reflect the official policy or position of DailyO.in or the India Today Group. The writers are solely responsible for any claims arising out of the contents of this article.