The Dalit scholar's suicide has proved a catalyst for the explosive coming together of young people across an extremely wide spectrum.

"Don't politicise the young man's death", was a refrain repeated ad nauseum by Smriti Irani and the rest of the Sangh Parivar brigade in the immediate aftermath of the death of Rohith Vemula, whose suicide has sparked a wave of protest throughout the country. Sanctimonious sermonising is a preferred mode of defence for a political party caught in a bind. And the BJP, with its unholy lien on smugness and piety, could only be expected to scramble pathetically to grab some moral ground. Some sections of media, also expectedly, joined the chorus, with anchors and panelists voicing alarm that students were being "instigated" and "diverted" from their primary avocations in the degree factory. 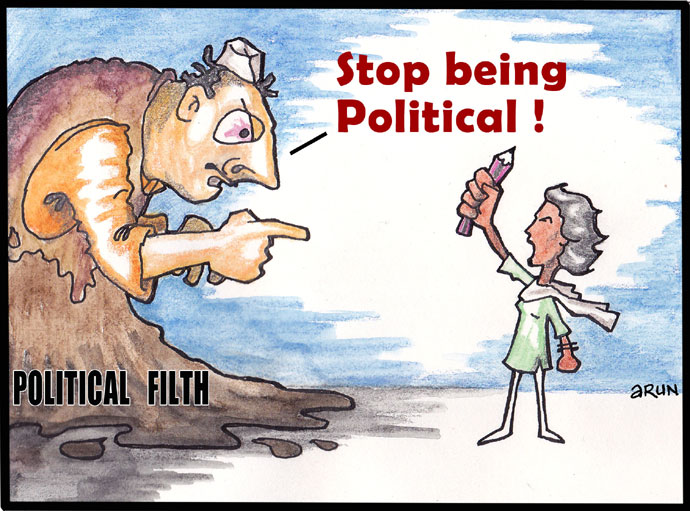 Pontifications that students need stay away from politics are perhaps as old as the organised educational system itself. The preachers would well do to listen to Lala Lajpat Rai, one of the most dynamic leaders of the freedom struggle. In his presidential address to the first All India College Students' Conference, held in Nagpur in December 1920 he had said, "I am not one of those who believe that students ought not to meddle in politics. I think it is a most stupid theory and an impossible theory too. It is the creation not of confused brains but of dishonest brains."

Smriti's dishonesties are legion enough to require no recounting here. Meanwhile, more and more students throughout the country have been voting with their feet on the lines of Lala Lajpat Rai and pouring out, in the campuses and on to the streets, on a variety of issues concerning the academic community and society as a whole. The last year and the first month of 2016 have seen a dramatic upsurge in the students' movement throughout the country - a veritable Student Spring. Student agitations have seen a scope and sweep not seen since the decades of the sixties and seventies.

The present phase of mass student agitation could be said to have started with the Hokkolorob movement, which began in September 2014 as a demand for action on an incident of molestation on the campus of Jadavpur University, Kolkata. When attempts were made to crush protests with a show of police brutality, it rapidly grew to involve tens of thousands of students in Kolkata and then spread to support actions from students throughout the country. The title of Hokkolorob - loosely translated as "let there be a noise" - that the movement took on signified in more ways than one the resurgence of the student political activist on the Indian campus scene - with a bang.

Though recent years had seen major mass movements with a considerable student presence, such as the December 2012 "Nirbhaya" movement in Delhi and the four year long movement of 2009-2013 for a separate Telengana state, Hokkolorob was significant for being a movement that had emerged from a campus issue and had carried within its sweep not only students from a number of other universities, but also teachers, parents and other participants from society at large. It met with success, with the government having to finally give in to the main demand of removal of the vice-chancellor who had ordered the police clamp-down. Soon after, two other prestigious universities of Bengal - Presidency and Shantiniketan - saw student agitations, though the impact was not as widespread as Hokkolorob.

In May 2015 the Smriti Irani led Ministry of Human Resources Development (MHRD), on the basis of an anonymous complaint, prodded the administration of the IIT-Madras to derecognise the Ambedkar-Periyar Study Circle (APSC), a students' body functioning in the institute. Among the "charges" in the complaint was that the APSC was "trying to create hatred against the honourable prime minister" and trying to make SC/ST students "protest against the MHRD and Central Government". The perverse governmental interference in an academic institution brought about a surge of protest from students in similar institutions against the obviously casteist and undemocratic act. The government and institute were again forced to hastily retreat, but not before a host of similar APSC bodies starting blooming in other campuses all over the country - potential watchdogs against casteist and autocratic institution managements.

Around the same time on June 12, 2015, the students of the Film and Television Institute of India (FTII) began a strike against the appointment of Gajendra Chauhan as the Chairperson of the FTII Governing Council, despite him having nothing of note to qualify him for the task, except his loyalty to the party in power. They too received countrywide support, not only from other students but also from alumni, film personalities and other intellectuals. The government however did not relent and the strike was withdrawn on its 140th day, with the promise to continue the struggle from within. Chauhan's first visit to the campus was only in January 2016, accompanied by protests, lathi-charge and arrests amidst fortress like security. Thus the FTII dispute continues to simmer with its enduring and deep impact on the student and intellectual community at large.

Occupy UGC is the next ongoing agitation that has spread across the country. It started in Delhi in October 2015 with the students' occupation of the premises of the University Grants Commission (UGC) to protest its decision to, among other things, scrap non-NET scholarships (which provide small grants to research scholars who are outside the ambit of the National Eligibility Test - NET).

The students were forced out two days later by the police in a pre-dawn swoop, but their pick-up and detention only seemed to serve to further steel their resolve to harden and widen their protest. The protesters have continued since then to stay put at the UGC gates, providing a standard for research students across India to rally around and organise their own protests. There have been been All-India mobilisations at Delhi which have been lathi-charged and water-cannoned, but the movement shows no signs of abating. The government, by referring the matter to a review committee, has tried to send signals of a softening of its stand, but the students have pressed forward with a call for an "all-universities strike" on February 18, 2016. It is in this situation of ferment that Rohith Vemula has proved a catalyst for the explosive coming together of students across an extremely wide spectrum, which in turn is providing a rallying point for the sundry forces who have felt the need to stand up against the repressiveness of the current casteist and communal regime.

Though Rohith had been targeted as a Dalit who refused to bow and submit to the casteist dispensation around him; though he, as his suicide note points out, had been reduced in his lifetime to "his immediate identity and nearest possibility"; in death, he rose high, above such categories and limitations, ascending to become the resistance icon of all struggling sections. As this is being written the protests snowball, with the figure for protest actions in various parts of the country on just one day - January 25, 2016 - reaching two hundred and forty two.

Bangaru Dattatreya, the Union Minister who pushed for action on the ASA activists, had, in his letter claimed that the University of Hyderabad (UOH) had become a den of casteists (read Dalits, tribals and all sections desiring the annihilation of caste), extremists (read all those putting up resistance to oppression and exploitation) and anti-nationals (read minorities, particularly Muslims, and all others opposed to the Sangh Parivar's  Hindutva project). Rohith's martyrdom has united such "casteists", "extremists" and "anti-nationals", not only in the UOH, but across the country. Joint Action Committees demanding justice for Rohith, formed in various universities and centres are now moving to form an All India Joint Action Committee for Social Justice.

The Parivar, though thrown on the defensive, has not remained silent. Organised attacks by RSS members on pro-Rohith protestors have already taken place in Mumbai, Kolkata and other places. These attacks may grow, but their efforts seem pitiable in the face of the rising wave of the Student Spring. This could lead to the more intensive use of the repressive state apparatus. But the movement for democracy and social justice seems to have already become quite a mass phenomenon which would require some stopping. The poet Pablo Neruda would have said, "They can cut all the flowers, but they can't stop the spring"

#Smriti Irani, #Occupy UGC, #Student Spring, #Rohith Vemula
The views and opinions expressed in this article are those of the authors and do not necessarily reflect the official policy or position of DailyO.in or the India Today Group. The writers are solely responsible for any claims arising out of the contents of this article.