Can CM Adityanath grandly support the temple and on the next day canvass in other states giving a religious tinge to campaigns?

Under the Constitution, no adult citizen can be discriminated for registration on the electoral roll on grounds of religion, race, caste or sex.

In Abhiram (2017), the Supreme Court said that this included appeals to one’s own and anyone else's’ religion (under Section 123 the Representational of Peoples Act 1951 (RPA)). These restrain hold good if the appeal is made by the candidate, his agent or with their consent.

Elections are made dramatic as Prime Minister and party leaders on multiple sides dominate the election eclipsing the candidates.

Can any particular constituency election be invalidated and the PM etc., be guilty of a criminal offenses if they appeal to religion (Section 125)?

Do they go scot-free because of lack of consent of the candidate or agent?

Consent is implied if the candidate is present.

But otherwise, these leaders corrupt election with impunity.

The recent election campaign has been replete with appeals to religion and petty squabbles. The Ram temple has infiltrated the process. In UP, name of towns have been changed to curry favour with Hindus. The Muslim vote has been a factor. Some of this is a prelude to the 2019 election.

Rahul Gandhi’s Hindu status is projected. In fact he is Hindu, Parsi and Christian by nexus.

Can Rahul say that Modi does not understand Hinduism? Can the PM retaliate? Is the Temple movement impliedly part of the electoral appeal?

Can Modi say that the Supreme Court was intimidated by the Congress to defer the building of the temple? This is contempt of court. 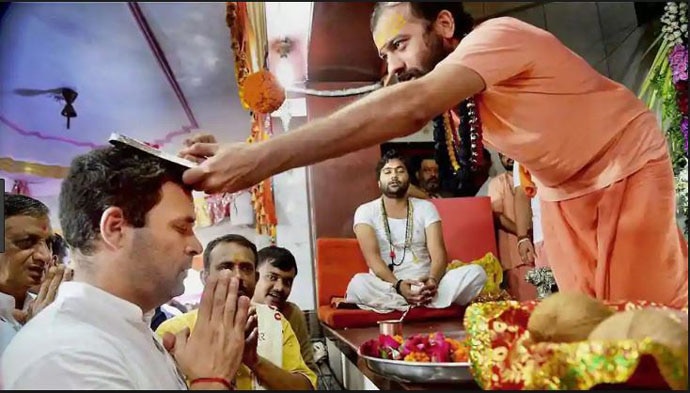 Rahul Gandhi’s Hindu status is projected. In fact he is Hindu, Parsi and Christian by nexus. (Photo: PTI)

Can even any such appeal be made by anyone?

Can CM Adityanath grandly support the temple and on the next day canvass in other states giving a religious tinge to campaigns?

In law, these may not be connected, but in politics they are.

Is any kind of support for cow-vigilantism not an appeal to religion?

In law, political parties have to give allegiance to the secularism of the Constitution (Section 29(A) (5)).

Dress is a secular option, but asking for votes dressed as a yogi in saffron flaunts religious appeal.

Religion, too, is a choice but should it be a weapon of politics?

Elections, already a tamasha, mercilessly indulge in religion to evade the law, but do not adhere to the principles underlying it. Can CM Adityanath grandly support the temple and on the next day canvass in other states giving a religious tinge to campaigns? (Photo: Reuters)

In India’s multi-religious society, all religions receive support from the State under conditions of what I have called “celebrity neutrality”.

Dehors elections, an appeal can be made to the faithful.

But can you denigrate or insult another faith?

When two communities are fighting over something, the populace can discuss it, but not insult or denigrate a faith with malafide intent or incidental or implied denigration.

Can the cow slaughter issue be raised as a religious issue to target people?

Can voluntary conversion be monitored by the Sate and result in punishments?

If Pakistan punishes for blasphemy, so do our lynching and social provocations.

India stands at the cusp of being typified as an intolerant state, encouraging a temperamental society into intolerance.

In principle, the courts have emphasised this.

Abdul Hussain (1975) says that one can make secular appeals that a candidate ‘personifies Hindu-Muslim interplay’.

Care, said Justice Gajendragadkar in 1964, has to be taken so that religious issues are not camouflaged as political.

Strangely, in Manohar Joshi (1996) and others, Justice Verma — who wrote the strange majority judgment in the Babri Masjid — thought that Hindutva is per se an appeal to religion.

This needs to be reversed.

Legal enforcement is weak. One way to challenge appeals to religion in elections is through the strict procedure of election petitions. These are necessarily expensive and time-consuming.

But the law is indulgently lax.

Electoral disputes languish in courts for years. But, this is not the only way to cleanse the system, contingent on the exigencies of adverse litigation between candidates.

There is no effective civil society monitoring of elections.

In 1965, when someone appealed and won on grounds of racism, Harold Wilson called the successful candidate “a parliamentary leper”.

The Tory Party expelled Enoch Powell for saying that from coloured immigration “rivers of blood will flow”.

Do our parties ever have the guts to throw out bigots who incense bigotry?

Certainly not the BJP, which heavily identifies with one faith.

Changing names of roads and places is bigotry. So also is destroying the paintings of a Muslim or book burning or lynching.

Partition was a mistake. It made a theological Pakistan. But India was always for all. Today virulent Sanghis want to create a Hindu India to discriminate, harass, wound, kill and oppress.

A secular country is one whose civil society is tolerant and accommodating.

Presently, Indian society is strife with provocative communalism projected generally and in elections. Civil society, with all its contradictions, has to stop this.

Also Read: Why the build-up in Ayodhya today is not a celebration of faith