The Group of 20 meet is already rocked by violent protests and scarred by deep global uncertainties.

Water cannons drenching and scaring away anti-capitalist protesters in Hamburg, Germany, who are demonstrating their ire against participating world leaders such as Donald Trump, Recep Tayyip Erdogan, Vladimir Putin and even Xi Jinping and Narendra Modi, has become the definitive image of the day. As the 12th G-20 summit begins today, July 7, in Hamburg, the grievances of the world's left outs have come back to haunt the global leaders, particularly the mostly rambunctiously visible ones.

While the Hamburg summit is expected to focus on issues of "global significance", and its most important agendas include more inclusive development, sustainable growth aimed at 2030, women's rights and economic growth, refugee and migrant issues, counter-terrorism and national security, it's the bilateral meets on the sidelines of G-20 that look completely imperilled.

In Hamburg, I call on #G20 leaders to join @UN efforts to combat climate change, violent extremism and other unprecedented challenges.

We call on #G20 leaders to make a difference and act on #climatechange today! RT to let the world know if you agree! pic.twitter.com/NcEIrC3Y4a

In addition, even though the big ticket goals would involve multilateral negotiations and maybe some ambitious target could be set, the mutual animosities between powers like India and China, or uncertainties between the US and Russia, Turkey and Saudi Arabia, and increasing self-dependence of Europe minus the United Kingdom and led by leaders like the German Chancellor Angela Merkel and the newly elected French president Emmanuel Macron, would mean that G-20 will be about avoiding embarrassments rather than huge bilateral advancements.

One of the biggest hurdles of the G-20 is the mutual avoidance that PM Narendra Modi and Chinese President Xi Jinping are hoping for, given the escalation of tensions on the Doklam plateau trijunction on Bhutan and Sikkim border. The sabre-rattling has worsened to the extent that the Chinese have accused Indians of "betrayal" and are currently instigating Sikkim's independence, while India is aghast that China would bully the tiny kingdom of Bhutan to have its geostrategic sway. This is in addition to the One Belt One Road induced uncertainties between New Delhi and Beijing, and the question of Pakistan.

This is a huge downfall from the 2014 jhula diplomacy and dinner by Sabarmati - the visuals and euphoria with which the Modi era of foreign policy had begun. While 1962 India-China war is being evoked, it's important to remember that two nuclear powers just cannot afford to engage in a real war on the border and diplomacy is the only way out.

Though a sliver of hope can be found in the mutual praise exchanged by Modi and Xi at the informal pre-BRICS meet in the sidelines of G-20. Given that Brazil, Russia and South Africa are equal participants in the important BRICS summit that's due later this year in Xiamen, China, the blow-hot-blow-cold rollercoaster of New Delhi and Beijing is likely to continue. 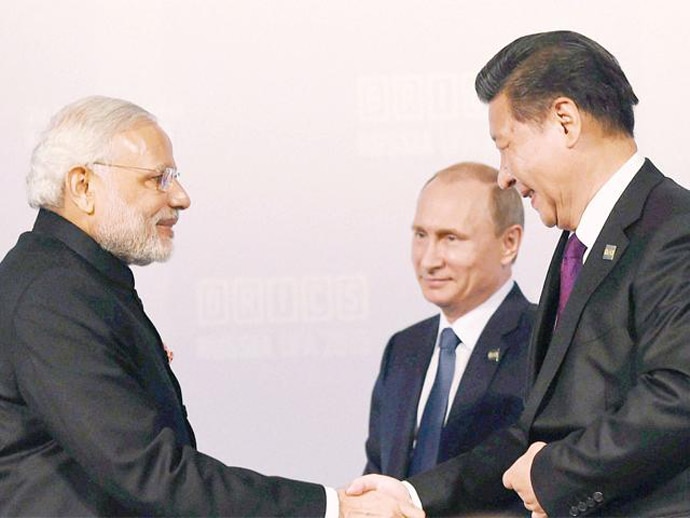 US president Donald Trump and Russian counterpart Vladimir Putin might have embroiled in controversy over the alleged Russian meddling in the 2016 American elections, but apparently, the two will be meeting each other personally for the very first time at G-20 Hamburg. That is a big event in itself, and all eyes are set on how the two finally hit it off, given the extreme nature of the political circumstance.

TODAY, @realDonaldTrump & @PutinRF_Eng are meeting. We have ONE message: End the bloodshed in #Syria https://t.co/mwhKuE0big #G20 pic.twitter.com/o6K49Y1oSm

But there are major thorny issues - such as Syrian conflict, geopolitical alignments, trade sanctions, Trump's personal equation with Putin and the allegation of Washington being remote-controlled by Moscow - that would be present as the two meet, but would likely remain unresolved or left hanging.

Although Trump made the US pull out of Paris Climate Agreement, blaming India and China, there might be awkwardness regarding conversations on climate change and sustainable development, which are a big part of the G-20 Hamburg summit. The leadership crisis in/from the US is the reason why both Xi, Modi have respectively upped the climate talk ante.

But given Modi's recent visit to the US to meet Trump and the hug diplomacy on show, it's likely that he would not bring up the tough questions. Moreover, with China and India caught in a hot wrangle, neither would overwhelmingly side with the other to talk about "climate orientalism". So where does that leave hardcore solution-seeking?

Turkey and Saudi Arabia had recent fallouts over Syria and are supporting opposites sides in the long, bloody conflict. Turkey, along with Russia and Iran, is backing Bashar al-Assad, while Saudi Arabia is arming the rebels. Moreover, Saudi Arabia's recent 110 billion dollar arms deal with the US may have irked Eurasian players like Turkey under Erdogan, who is overseeing a deep Islamicisation of his once secular country, and is also trying to gain back its lost "Ottoman glory" and in the process committing innumerable human rights violations.

After our #Turkey Director #IdilEser was detained with 9 others, #G20 leaders must challenge @RT_Erdogan on human rights crackdown pic.twitter.com/BzfeS3AUUi

Europe versus UK, US

Brexit and Trump have been two major disruptive forces that have precipitated a mutual divorce between Europe and the Anglo-American arc. With the European Union finding a new lease of life under centrist and left-of-centre leaders such as Emmanuel Macron in France, and the bulwark of secular commitment against forces of separatism in German Chancellor Angela Merkel, rejection of far-right candidates in the Netherlands, Austria, the EU post-Brexit is looking confident in itself, ready to lead.

On the other hand, the paranoid politics of UK prime minister Theresa May and of course US President Trump has left the EU less incredulous about UK-US contribution to the secular, inclusive and progressive world order that should be the aim of striving powers. EU is building bridges with Japan, India, Brazil and China to compensate for the Anglo-American irritant.

In conclusion, the G-20 Hamburg will be about world leaders somehow preventing a possible collapse amid several simmering rivalries and less about coming together to pledge major promises for a shared future. As American analyst Ian Bremmer says, it will be a G-Zero and less a G-20, given the leadership crisis and sectarian strife.

That summit happening right now in Hamburg is not the #G20. It's the G-Zero.Allow me to explain... pic.twitter.com/G8JGyQF9wa

#Putin, #Xi Jinping, #Donald Trump, #Narendra Modi
The views and opinions expressed in this article are those of the authors and do not necessarily reflect the official policy or position of DailyO.in or the India Today Group. The writers are solely responsible for any claims arising out of the contents of this article.