Ganga in Haridwar unfit even for bathing: Here's a holy dip into PM Modi's promise to clean the river in 3 years

On May 18, the Delhi edition of The Times of India carried a front page report titled, "Ganga in Haridwar unfit even for bathing". This was based on the findings of the Central Pollution Control Board (CPCB). The four main indicators of river water quality assessed were temperature, dissolved oxygen (DO), biological oxygen demand (BOD) and coliform (bacteria).

So, that's the situation in Haridwar, which is at distance of a mere 294 km from Gangotri, the origin of the river.

One can imagine how polluted it would become further downstream along its 2,525 km journey to the sea.

According to Hindu mythology, a few drops of the holy water from the river, Gangajal, offered to dying persons ensure their salvation. Even the person offering Gangajal to the dying is believed to purge away his sins with the gesture.

But sadly the same sin-cleanser water is unfit for bathing, let alone to die with.

Reading this particular report, it's not difficult to recall Prime Minister Narendra Modi’s speech in 2013 in Varanasi.

While addressing the Vijay Shankhnaad Rally, Modi, who back then was addressing the crowds as the BJP's prime ministerial candidate, had expressed serious concerns over the state of river Ganga.

“For others, the Ganga could be just a river, but for us it is our mother. Ganga paani ki dhara nahi, sanskriti ki dhara hai (the river is not just a source of water for us, but a symbol of our culture). The UPA initiated a scheme to clean the Ganga, a lot of campaigns were launched and the people thought they would see a difference. But I want to say that in the past five years no steps were taken by the Centre. The people of India want answers from the government on what they have done to clean the Ganga.” 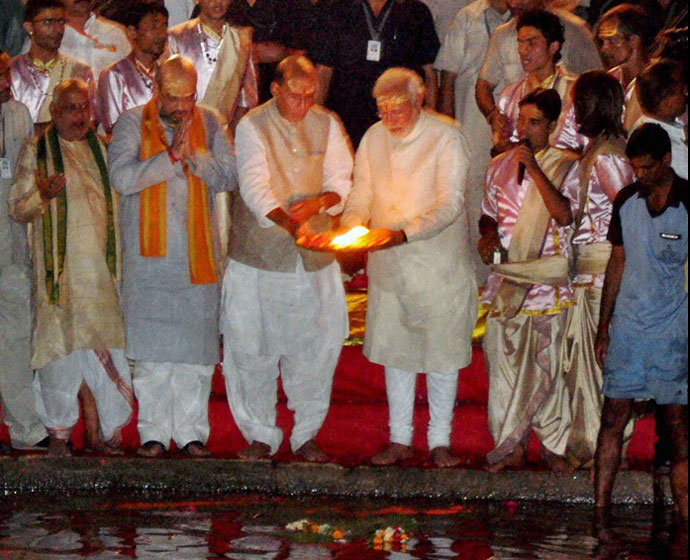 Narendra Modi with Rajnath Singh, Amit Shah and others seen performing Ganga Aarti in Varanasi in a 2014 PTI file picture.

Modi then had urged the people to uproot those who have fooled the nation in the name of the Ganga. He asked, “Those who could not manage (to clean) the Ganga, how can they manage (to run) the nation?”

The call to revive a river that is sacred to the Hindus, and a lifeline for around 40 per cent of the country’s population, helped propel the BJP to power. True to his word, Modi created a separate ministry for river development and Ganga rejuvenation. Its task entrusted under the leadership of Uma Bharti, who is known for her love of the river. The fiery sadhvi had for some years been agitating for quick and effective action to save the river.

On 14 December, 2014, Bharti had claimed that the Centre was committed to clean up the river within three years even as she voiced concern over the extent of the pollution. After an inspection in Allahabad, the newly appointed minister had said that the people were getting only "effluents" and not "Gangajal" out of the river.

In his first year, PM Modi launched the Namami Gange programme with a whopping budget of Rs 20,000 crore allotted for a five-year period. This was at least 20 times more than what had been spent on Ganga rejuvenation projects since 1985.

But as his government nears the three-year mark, Ganga remains as dirty as it was.

An RTI reply revealed that about 20 per cent of the Rs 3,700-crore funds allocated in the first two years of the programme has not been utilised.

More than 30 years ago, in 1986, the then prime minister Rajiv Gandhi had started a clean Ganga project in Varanasi with a funding of Rs 462 crore. Till February 2014, Rs 939 crore had been spent on the Ganga Action Plan. Former PM Manmohan Singh was the head of the National Ganga River Basin Authority (NRBA), which was formed to reduce pollution in Ganga.

Till September 2013, Rs 785 crore had already been spent on it. But the state of the river confirms that all those efforts (read money) have gone down the drain, literally.

The waters of the mighty Ganga carries with it a belief (that millions and millions of Hindu devotees subscribe to) that it is indeed holy. People bathe in it, drink it, store it (bottles) in their houses, worship it and swear by it.

What's more, the river, this year, was declared a living entity. Yet for all practical and impractical purposes, it remains a meandering drain that flows relentlessly on, in its polluted misery, cutting across a vast chunk of India, devouring millions of rupees in broken promises.

A river that symbolises purity has been polluted by the very people who worship it — a symbol of unity that has been used for political gains and then nearly ignored.

The Modi government now has two more years to clean what it could not do in three years. Because by 2019, millions of Hindu devotees who voted for the BJP might question the PM why he couldn't keep his promise.

Well, even the holy water may not help the BJP wash its hands off responsibilities.

Also read: Ravi Shankar Prasad is right: Modi is as 'clean' as Ganga