The great cow governance conundrum has finally begun to manifest itself. And the moral of the story is that cow-driven state agenda ends up harming the very animals it’s trying to protect.

At least 200 cows have died – allegedly of starvation, lack of medicine and general neglect – in a cow shelter in BJP-ruled Chhattisgarh, in Rajpur village of the state’s Durg district. A BJP leader, who owns the shelterhouse, Harish Verma, has been arrested in this regard.

According to a Hindustan Times report, “The officials have, so far, confirmed 30 starvation-related deaths. Villagers, however, alleged that the number of deaths would be 200 and most of them have been buried near the shelter. Several carcasses, other than those buried, were found in the vicinity, they alleged.”

Over 200 cows dead in 2 days due to starvation in a Gaushala in Chattisgarh's Durg says Rajpur village Sarpanch Pati Sevaram Sahu pic.twitter.com/AK6560q4Ur

Moreover, 100 more cows have been reported to have died in Bemetera district of Chhattisgarh, and the villagers have blamed negligence from authorities and lack of food and maintenance at the cow shelter for the deaths.

The arrested BJP leader, however, “blamed” the BJP government of chief minister Raman Singh for the deaths. Verma, who has been running the shelter for the past seven years, says that over-capacity by over 300 per cent has resulted in lack of food, medicine, care for sick and hungry cows, resulting ultimately in their painfully prolonged deaths.

Verma, however, has been promptly held, and according to the police sources quoted in the HT report, “He was arrested on Friday evening after being charged under sections 4 and 6 of Chhattisgarh Agricultural Cattle Preservation act -2004, Section 11 of Prevention of Cruelty to Animals Act 1960 and Section 409 of Indian Penal Code (IPC).”

Verma has maintained that a collapsed wall killed 27 cows two days ago, while MK Chawla, deputy director of the veterinary department of the Durg district, said “lack of fodder” was the primary reason for the cow deaths. Verma has said that the Chhattisgarh state government did not provide money for the shelter which he had been demanding for two years.

“My gaushala (cow shelter) is overcrowded. There are more than 650 cows against the capacity of 220. I have intimated the government many times that I am not able feed them, but in vain. More than Rs 10 lakh meant for the gaushala is pending with the government but they have not granted till now. I am not guilty for the deaths,” added Harish Verma.

While the Gau Seva Ayog would register a case in this regard, the malaise has been laid bare in the Chhattisgarh cow shelter deaths episode. In fact, in states like Haryana and Jharkhand, similar cow deaths have already been reported extensively. 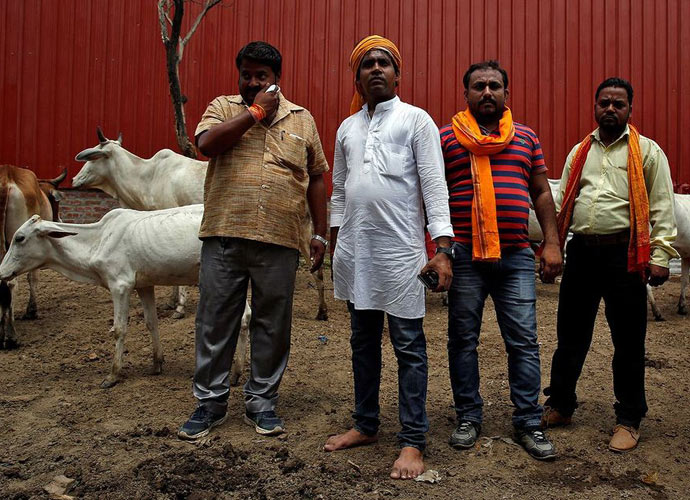 The reasons are strikingly similar – improper facilities, lack of fodder, no hygiene, pneumonia caused by rains, etc. A number of cows got stuck in swampy land and died at the Mathana Gaushala in the Kurukshetra district of Haryana.

These incidents point to the lack of infrastructure to take care of the cattle which are on the brink of a population explosion. Without the recourse to cattle market and slaughter of infirm animals, the excess drain on the economy as a result of feeding all the cows and bullocks and bulls would be tremendous.

Even though the cattle trade restriction has been stayed by the Supreme Court, its impact has been one of fear and loathing among the masses, with farmers fearing transporting cows for the threat it poses to their own lives.

Exactly as beef lynchings become routine affairs, diet policing and moralisation of the palate become items of vicious cultural nationalism, the very animal in whose name the politics is being played is dying of neglect.

While the Sangh Parivar goes out of its way to project cow as “holy” and therefore beyond gastronomic reach, targeting beef-eating communities such as Muslims, Christians, Dalits and many Hindus as well, we have the bovine creatures killed by starvation.

The deaths of Mohammad Akhlaq, Pehlu Khan, Junaid and others in the name of the cow have now been thoroughly exposed as nothing but disgusting Hindutva fascism, in which the cow becomes an instrument of oppression. Real love for animals would never let anyone kill in the name of a fellow creature.

Now that the cows, are themselves dying of neglect, cow governance has been comprehensively exposed as a fundamentalist insanity in the name of sanctimonious governance.