George Fernandes: The tragedy of a towering hero

The Janata Party leader was the right man caught in the wrong company.

It was heartening to see Prime Minister Narendra Modi wish George Fernandes on his birthday using Twitter, and acknowledging his contribution to Indian democracy. Fernandes is 88 now, bed-ridden for the past few years, and unable to comprehend the developments in Indian politics. But in his prime, he was a livewire. His role in post-independence era is indisputable, for he fought for the common citizenry for nearly five decades. Public memory is short, they say. Sadly, in Fernandes' case it is even shorter.

Greetings to Mr. George Fernandes on his birthday. Generations of Indians will remain grateful to George Saheb for his historic role in preserving India’s democracy. A people’s person, he distinguished himself as a capable administrator. I pray for George Saheb’s good health. pic.twitter.com/35ADgNuKQS

Fernandes was my childhood hero. I do not hesitate in saying it even today. His office, famously known as "204, Charni Road", or "Donshe Chaar" in Marathi, was right opposite my home in Girgaum in Mumbai. It was a typical Marathi middle class-area, not used to labour union offices. I don't know why George decided to set up his first office here. Probably because it was close to the Brihanmumbai Municipal Corporation headquarters.

Those days, Fernandes had mobilised a vast union of BMC class IV employees in Mumbai.

I was eight or nine years old when I first saw Fernandes, and was awestruck by him. He symbolised hope. A boy from north Karnataka, worked as a hotel worker in Bombay, slept on the streets until P D'mello took him under his wings, and rose to become the most powerful union leader in the financial capital of India. He had more than 1.5 lakh municipal workers, BEST employees and taxi drivers under his control. He could shut Mumbai down with a single call. From the chief minister to the municipal commissioner, Fernandes had the might to take on everyone.

He became a national figure overnight after the 1967 Lok Sabha elections. SK Patil, leader of Mumbai Congress, known to be filling party coffers since Jawaharlal Nehru's time, had a reputation of being unbeatable. George overwhelmed him in his own constituency and defeated him with the ease of handling a switch. That was the first of the many victories that earned him the reputation of being a "giant killer".

For a man with a larger than life personality, Fernandes could even pull off an exaggeration convincingly with the public. I have met him several times, and experienced the euphoria he generated among the people. Even during the twilight of his career, in the 1990s, I have seen a packed Shivaji Park going crazy over him. It happened during a union rally. Sharad Rao and several other leaders delivered their speeches, but Fernandes couldn't be seen anywhere. After a while, he made a heroic entry, where he walked towards the stage through the crowd that went berserk. He had won the rally even before he started to speak.

During his initial days in Mumbai, he earned the respect and love of the people because he was genuinely involved with people's issues, and not a façade to gain popularity. He had gone down on railway tracks to stop the trains during the 1974 railway strike. He had the fire in the belly, and people were smitten by it. He faced police torture for it, but it only intensified his fighting spirit.

He spent the entire period of Emergency in jail, and was not even released during the historic 1977 Lok Sabha elections. But he fought from jail, and won the Muzaffarpur constituency by a landslide. The fact that he could pull off such a thing despite being in jail added insult to injury for Indira Gandhi, and she hated him. He was the poster boy of Janata Party, and his chained photograph had become a household image.

Fernandes reluctantly became a minister in the Janata Party cabinet. But he took charge of the ministry of industry, and took no time to leave a socialist stamp on it by banning Coke. We probably can't comprehend the importance of the decision in the liberal world, but in 1977, taking on an international giant was a bold move. That, in effect, enabled the birth of Thumbs Up in India.

In VP Singh's cabinet in 1989, he marked his legacy as railways minister by introducing the historic Konkan Railway, along with the then finance minister Madhu Dandavate. I tweeted in the morning that not many remember Fernandes today.

Today is George Fernandes’ birthday. I feel sorry for him, people don’t even remember him now. One may not agree with his opportunistic politics, but his life is a thriller and definitely deserves a biopic or a biography/novel.

But a user quickly responded, "Those who travel by Kokan Railway do." As defence minister in Vajpayee cabinet, he was equally popular among the lower ranks of the Indian Army as he responded to their needs.

When the Janata Party split, Fernandes' downfall began. He backed the Morarji Desai government and defected to the rebel camp the next day, which cost him his hard earned credibility. And post Mandal, he could not find his space in India politics. He never had a devoted vote bank like Lalu Yadav. He always banked on his popularity, whether in Mumbai or, later, in Bihar. He was a Christian who rarely played the minority card. He spoke seven languages and was a true product of inclusive India.

The likes of Nitish or Lalu could not afford a leader like Fernandes overshadowing them in Bihar. To sustain his relevance in national politics, he drifted towards the BJP. His relationship with Atal Bihari Vajpayee and LK Advani was excellent, but the move turned out to be the last nail in the coffin of his credibility. 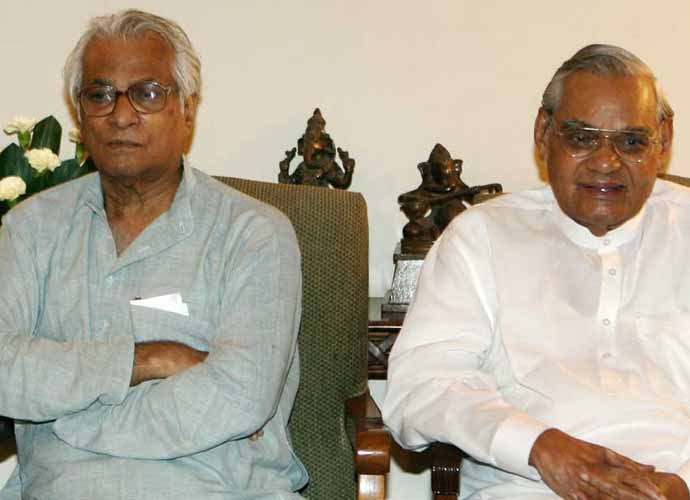 After the 2002 riots in Gujarat, he ended up defending Narendra Modi and that was the culmination of a tragedy. It was a great fall from grace for a leader who had represented international human rights organisations in India.

Unfortunately, the last few years of political hara-kiri have overshadowed his electrifying career and the essential people-centric role he played in the post-independence era. Fernandes' story is one of tragedy.

Nonetheless, he certainly deserves an objective biography or a biopic. After all, Vajpayee was not the only right man caught in the wrong company. Happy birthday, Fernandes!

Also read: Why this Kargil martyr's daughter is angry about how India doesn't respect its Army

#Atal Bihari Vajpayee, #Narendra Modi, #Janata Party, #George Fernandes
The views and opinions expressed in this article are those of the authors and do not necessarily reflect the official policy or position of DailyO.in or the India Today Group. The writers are solely responsible for any claims arising out of the contents of this article.