Why the Geospatial Bill is absurd and impractical

The government’s decision shows it has surrendered to resolve boundary disputes with Pakistan and China.

If in February 2016, the Geospatial Information Regulation Bill had not been a Bill, ie a proposed legislation, and instead had already been an Act, ie a law of the land, the government would have been forced to initiate proceedings against Lok Sabha speaker, Sumitra Mahajan.

Mahajan is the "Competent Authority" in whose name India’s first parliamentary channel – Lok Sabha Television – runs and managed by the Lok Sabha Secretariat under her. The Hindustan Times reported on February 9, 2016 that the channel committed a faux pas when it "put out a map of Jammu and Kashmir with parts of the state under Pakistan’s Occupation designated as 'Azad Kashmir'."

The offending cartographic creation, the paper reported, was run as part of a package during "a discussion on the programme 'Indian Defence Analysis', which had former Air Commodore Trilok Chand, former Maj Gen Ravi Arora and former Lt Gen Ata Hasnain on the guest panel”. No further reports appeared on this matter though the reporter quizzed the seniors in the channel. They were told in sarkari-speak, "will have to look up the footage". 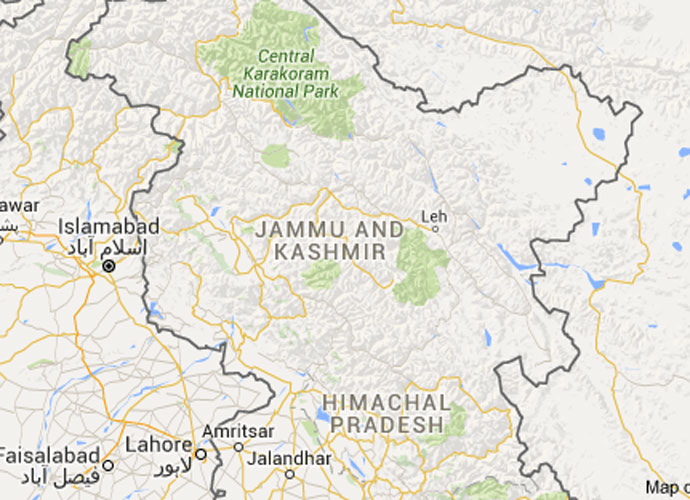 Search for Kashmir maps on the internet and you will find them in millions.

The incident highlights what has been going on for years.

Search for Kashmir maps on the internet and you will find them in hundreds. Most of them depict those parts that India claims as our territory as "India Held Kashmir". The trick for any serious researcher is to check the source before using the map. Is it a Pakistani source, or is it a Western source? Good researchers follow a simple dictum when it comes to using maps from the internet on Kashmir and Arunachal Pradesh: never ever use them from non-India source.

Thankfully this offensive map was not flashed inside the Lok Sabha and was restricted to the TV channel but knowing the capacity of a large number of MPs to make out such technical niceties, this may also happen. It is quite likely that someday an enthusiastic TV producer zooms in on a MP flashing a map of Kashmir which displays PoK as part of Pakistan or shows the entire Kashmir region as disputed area.

In pre-digital years, Indians had to wait endlessly at times for subscription copies of international magazines like Time, The Economist, Newsweek and National Geographic. The reason: dim-witted babus scrutinised magazine to decide which maps inaccurately depicted India’s boundaries. Eventually, the magazines would arrive but with an ominous looking black stamp defacing the offending map.

"The boundaries of India as shown in this map are incorrect," would be inscribed over it and though one could still see the map and understand what angered the GoI causing defacement of the illustration. The general belief was that this was another form of tokenism on part of government and reflected all-round hypocrisy over disputed parts which have not been in Indian control for almost seven decades.

Whatever be the matter, this practise continued and several magazines, especially The Economist learnt that India was touchy on its boundaries, yet most magazines and papers continued using those which show Kashmir as disputed territory. This demonstrated that despite periodic penalisation, these magazines do not endorse to India’s claim on Kashmir. In their eye, it is still disputed territory.

The government’s decision to put up a draft of the Geospatial Information Regulation Bill demonstrates that it has surrendered in the effort to resolve boundary disputes with Pakistan and China. Because if you cannot resolve one problem and are unable to get people at accept the Indian position, the best way out to censor this.

The official thinking is that if the government can prevent Indians from seeing maps showing Kashmir, Aksai Chin and Arunachal Pradesh as disputed, India would have resolved the problem. How ingenious! Everything is a matter of perception and if the government is able to ensure that only maps of "whole of India" are available, the next generation will grow up believing that no part of India is under "occupation"!

In the era of digital information flow, the new geospatial law demonstrates that its drafters are far removed from the way internet functions. If this law was in force now, even as I write these lines, I would have been liable for action because one of the windows on my PC has one such map.

Similar action will be taken against readers who open such sites and all businesses – search engines, for instance – who allow such websites to use their platform. The proposed Bill is so impractical that its drafting defies logic.

If the Indian side has been blind to the unfeasibility of the Bill, the Pakistanis have also been complimentary. Passing laws are internal matters of any sovereign nation and India’s law makers are well within their right to enact any law however ill-conceived it may be. The right to debate and disagree with the government is that of the people and not of any third party. Barring a small section in India, most people endorse the official position on India’s right on PoK and borders with China.

Instead of its over-enthusiastic drive, it would have been more prudent on India’s part to campaign among its people that we should not use maps that wrongly depict India’s external boundaries.

A beginning should have been made with public broadcasters and educating editors who manage these channels. An opportunity to generate awareness on India’s positons on its borders has been lost and in today’s technology-dependent India, all such legislations will appear obscurantist. It goes against the image of a modernist that Modi is projecting.

Post your comment
#Kashmir, #PoK, #Geospatial Bill
The views and opinions expressed in this article are those of the authors and do not necessarily reflect the official policy or position of DailyO.in or the India Today Group. The writers are solely responsible for any claims arising out of the contents of this article.