Alarming, but not quite unexpected, reports of India dropping to the 100th rank on the global hunger index in 2017 have surfaced now. We were behind Nepal and Bangladesh anyway, but now we are lagging behind war-ravaged Iraq and North Korea, tying with Rwanda this time. The survey among developing countries has put India at position 100 among 119 nations, and to say that the problem is acutely embarrassing as it is depressing is an understatement.

India's "serious" hunger problem was brought to light by the report released by the Washington-based International Food Policy Research Institute on Thursday, October 12. We have a global hunger index of 31.4, and the report stated, "given that three quarters of South Asia's population reside in India, the situation in that country strongly influences South Asia's regional score".

It might seem at first glance that in 2014, India fared far better, at 55th rank on the GHI, making an improvement of eight positions since 2013. Reports then suggested that important legislations such as the food security act, mid-may meal scheme, anganwadis in schools of the previous UPA governments had certainly helped alleviate the immense nutritional gap. Though even then, there were distress signals. With 194 million people going hungry to bed, India housed a quarter of the world's malnutritioned, making it an immense challenge. 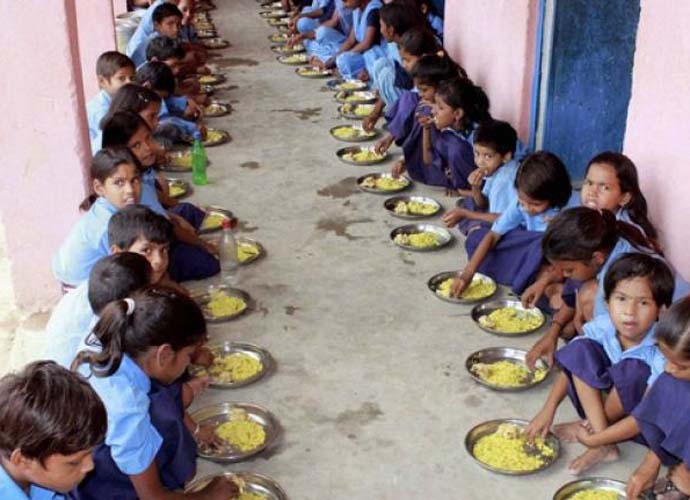 The emphasis on Aadhaar to avail mid-day meals in schools led to major exclusions among the poor. Photo: PTI/File

There were chronic problems like micronutrient deficiencies, being underweight, stunted growth and many more issues, mostly driven by poverty, but also impacted by social biases against women and caste others, inadequate infrastructure, bad storage facilities for grains and crops, etc. But steady economic growth and pro-poor policies such as the MGNREGA, Food Act, Right to Education, etc. ensured some progress. For example, the prevalence of underweight children came down from 49.2 per cent in 1990 to 30 per cent in 2013.

But the uptick in mitigating the challenges of hunger and malnutrition was also lost with the government withdrawing crucial protein sources such as eggs from mid-day meals and anganwadis in schools. In addition, the emphasis on Aadhaar to avail food rations, mid-day meals in schools, has also led to major exclusions among the poor, whose children must now go hungry in case their identities are not authenticated by the leaky, loophole-ridden platform.

Compounding the governmental neglect is the problem of severe drought and rainfall deficit, along with structural deficiencies in irrigation, crop storage, emphasis on big dams neglecting smaller, sustainable projects, and the desertification of large tracts of land in the country. While farmers are committing suicide riddled with debt and consecutive crop loss, and loan waivers are becoming a cruel joke, there seems to be no light at the end of the dark tunnel that's agriculture in India.

"While the country has progressed on three of these four indicators over the past decade, the proportion of Indian children suffering from wasting related to undernourishment has actually increased from 20 per cent a decade ago to about 21 per cent over the past three years," states the report in The Telegraph, quoting from the GHI report. The Telegraph also quotes Pramod Kumar Joshi, an agricultural economist and IFPRI South Asia director, who said: "Despite a massive scale-up of national nutrition-focused programmes, drought and structural deficiencies have left large numbers of poor in India at risk of malnourishment".

Meanwhile, the twin shocks of demonetisation and GST have frazzled the agri sector in India, resulting in unsold food items, inflation, and loss of income for tens of thousands of farmers. The restrictions on cattle trade for slaughter, although stayed by the Supreme Court, have had a cascading impact on farming, with the farmers saddled with old and infim livestock. Protein intake from animal sources, such as eggs, has declined in this era of gastronomic policing. This means that GHI is not only not going see an improvement in the current year, it might actually fall even further, because of systemic failures and series of bad policy decisions taken by the government in the last one year.

With economy on a downslide, the chief indicators of social health are the first to be affected. The global hunger index looks at undernourishment, child mortality rate, child stunting and wasting to determine the status of nutrition, or lack of it, among a people. A GHI score of 10 or lower is good news, but over 50 is "extremely alarming". India's 100th rank therefore comes across as very, very alarming indeed.

Even though India had hunger issues when the GDP growth wasn't being criticised at the current rate, how the poor eat would be relegated to the forgotten corners of our collective election frenzy. With more and more structural exclusions replacing structural inclusions, the future looks bleak, to say the least.

[Editor's note: The article was updated to include the point that the methodology to determine GHI was changed in 2016.]

Also read: Yogi Adityanath is as clueless about Ayodhya temples as he is about governance