Rise in temperatures is threatening the survival of Himalayas

Those in the plains, too, can't be complacent as these mountains are the origins of the rivers that sustain more than half of India’s population.

Did you know that the mighty Himalayas provide livelihoods and ecosystem services to more than 210 million people — and provide water to more than 1.3 billion people, a fifth of the world’s population, living in downstream river basins?

Now, imagine what happens when the snow on these high mountains melts at a faster rate in view of the rising global temperature?

From Jammu and Kashmir in the west, to Arunachal Pradesh in the east, India is blessed with an almost 2,500km-long Himalayan range with varying biodiversity in sync with altitudes. This includes Ladakh and parts of Himachal Pradesh (Lahaul and Spiti) that fall in the trans-Himalayan region.

This is all part of the Hindu Kush Himalayas (HKH) region spanning eight countries — Afghanistan, Pakistan, India, Nepal, Tibet (under Chinese occupation), Bhutan, Bangladesh and Myanmar — dependent on and facing similar problems due to the rising temperature in the HKH region.

Ladakh has been witnessing increasing temperatures. Precipitation (snowfall in case of Ladakh) has been erratic to say the least. On the other hand, Sikkim and Arunachal Pradesh have been witnessing similar developments with springs going dry early each passing year. Mountain communities are dependent on the local springs for their daily water needs rather than the massive rivers gushing through deep gorges or meandering through valleys. 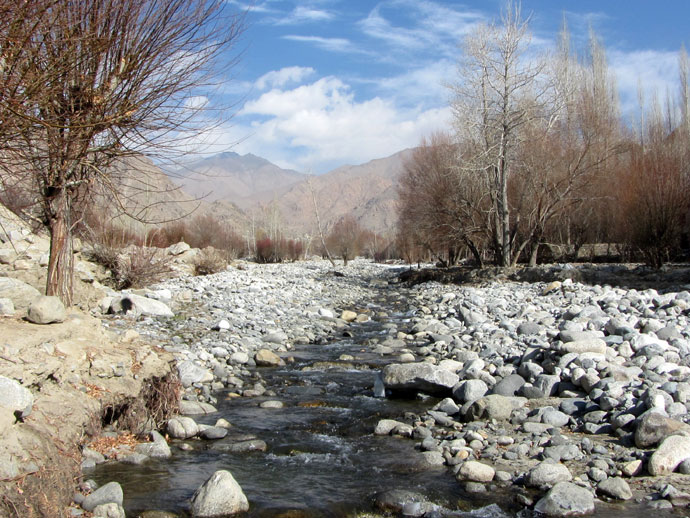 What people on the ground and experts have been saying has been corroborated in a report that will soon be released. The changing climate is indeed a serious issue when it comes to the Himalayas, the repository of snow/glaciers that feed billions in the subcontinent.

As part of the Paris Agreement, more than 190 countries have committed to reducing their green house emissions and taking various measures to ensure that the global temperature does not go beyond 1.5 degrees Celsius (as compared to the pre-industrial time).

But, even when the world manages to maintain the global temperature rise average at 1.5 degrees Celsius, there will be a rise of 2 degrees Celsius or more in the Hindu Kush Himalaya (HKH) region by the end of the century, resulting in a substantial decrease in snowfall and melt rates increasing by at least 33 per cent.

This is already happening as temperature increases more rapidly in the high-altitude region, points out a report being coordinated by the International Centre for Integrated Mountain Development (ICIMOD), an inter-governmental organisation of Afghanistan, Pakistan, India, Nepal, Tibet (China), Bhutan, Bangladesh and Myanmar.

The soon-to-be published report "Comprehensive Assessment of the Hindu Kush Himalayan (HKH) Region", as part of the "Hindu Kush Himalayan Monitoring and Assessment Programme (HIMAP)" that is coordinated by the ICIMOD, points to a decrease in snow-covered areas and snow volumes over the coming decades in response to the increased temperatures and to the rise in the snowline elevation.

The rising temperatures in the Ladakh region, made up of Leh and Kargil districts, should be a cause of immediate concern. Leh’s annual precipitation is about 100mm, all snow. Kargil receives more precipitation than Leh. For centuries, the region has received snow starting from October till March, vital for the survival of Ladakhi people and agriculture. Of this, snowfall in December, January and February is most important. But the scores of people whom I met last year and still others who I spoke with this year have been complaining about how snow has been missing for almost the whole of December in Leh town (about 11,000feet) and villages at a relatively lower altitude. A quick glimpse at the Customized Rainfall Information System (CRIS) of the Hydromet division of the India Meteorological Department (IMD) for Leh shows that between 2012 and 2016, snowfall in November for four out of five years showed 100 per cent departure from long period averages for the district.

For December, three out of five years show above 90 per cent departure from long period averages for the district.

I called Sonam Lotus, who heads the IMD’s Jammu and Kashmir office, to understand what this data means. “Although just five years’ data is not sufficient to predict a trend, it is nevertheless true that snowfall in Ladakh has been variable and inconsistent. But one thing our records show is that there has been a significant increase in temperature (in Ladakh) especially after the 1980s,” he told me.

Earlier, when there was snowfall, the snow would remain for almost a week or more. But now it melts in just two days, he observed, arguing that the increasing number of people (including the large number of tourists) and vehicles have pumped enthno-carbon and other green house gases into the atmosphere as Ladakh witnesses a drastic change, positive by conventional standards, in the standard of living.

While talking about the future of the mountain communities and how their lives and livelihoods are integral to the well-being of the mountains, a common factor that comes forth across regions is the participation of the communities themselves.

Unfortunately, government programmes largely neglect local communities. Be it the dams in the fragile Uttarakhand or Himachal Pradesh, be it factories set up along the rivers in the Himalayan foothills or the mounting problem of municipal solid waste, the government wants to keep away the community and bring in an outsourced partner.

For decades now, the effects of such a debilitating approach are for all to see. It simply has not worked because community participation is the key to conservation, the key to ensure that local and global interests are taken care of. 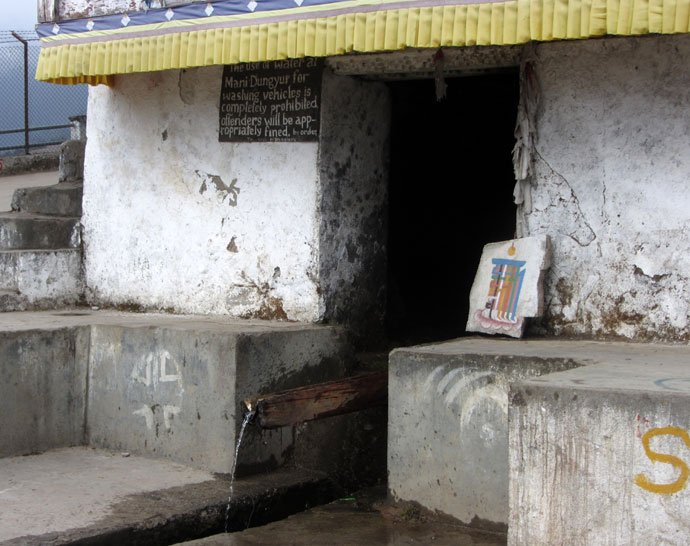 One of the best examples is the World Wide Fund: India’s Western Arunachal Landscape programme, which began in 2010, has been monitoring the presence of and working for the conservation of threatened species along with the local Monpa population of Tawang and West Kameng districts of Arunachal Pradesh.

The community was faced with the crisis of springs drying faster — a continuous topic of discussion among the community and the WWF people. “Our conservation programme are primarily community conserved programmes, managed and owned by the local community. It is for their interest, to secure their livelihood and their ecological needs. For many years now, the community has been talking about the need for spring rejuvenation. We now plan to study and identify the springs in these two districts as a pilot project,” said Kamal Medhi, WWF-India coordinator, Western Arunachal Landscape. 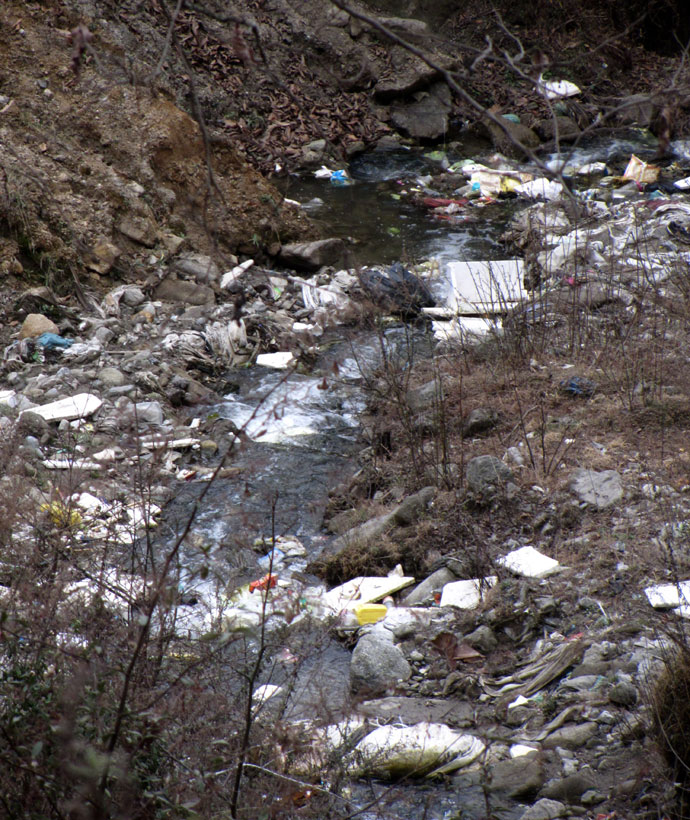 A spring on Tawang's outskirts, where the municipal waste is dumped. Photo: Nivedita Khandekar

It is the tenacity of the communities that will help in the long run, with or without government help. But having committed to the United Nations via the Paris Agreement, governments of the HKH region countries are duty-bound to help their mountain communities.

Going beyond the geo-political boundaries, these communities have had a healthy cultural exchange and a thriving trade. Even today, positive case studies from one mountain community can be tried by others and the government can facilitate such experiments.

After all, for the government of India, as for other countries, there are very limited options when it comes to water availability.

Surely, the Himalayas and their glaciers, the snow and the rivers that sustain such an enormous population are vital for our survival.

#Himalayas, #Climate change, #Global warming
The views and opinions expressed in this article are those of the authors and do not necessarily reflect the official policy or position of DailyO.in or the India Today Group. The writers are solely responsible for any claims arising out of the contents of this article.