BJP’s decision to rush headlong to form a government in Goa and Manipur has taken the sheen off Prime Minister Modi’s moral grandstanding over the landslide Uttar Pradesh Assembly election verdict.

Even as Modi was unveiling his “new India” vision at a victory parade meeting at the BJP headquarters in Delhi, party apparatchiks in Panaji and Imphal were busy shredding his project into smithereens.

Behind the veneer of moral grandstanding was political gut instinct at work. There was reassertion of realpolitik over reason, and crass cynicism over value-based politics.

The speed at which BJP general secretary Ram Madhav and senior minister Nitin Gadkari moved to cobble together a majority despite being in minority in both Goa and Manipur is symptomatic of the "chaal, charitra and chehra" of Modi’s BJP.

It’s true of Modi and his persona.

There are two elements to the Goa and Manipur developments as far as Modi’s script is concerned.

Firstly, one can see a calculated, professional approach to the politics. Modi has defined this approach and a cool and calculated Amit Shah executes his project.

This is a no-holds-barred approach, which is new to India. The Modi-Shah duo has corporatised the BJP's working. Now, party managers plan, strategise, work, move and manipulate like corporate raiders. Speed counts but morality is at a discount.

Secondly, speed is an important factor in the manner by which Modi’s frequent moral grandstanding is upended. Modi’s own script, as it appears on the surface, is wiped clean. 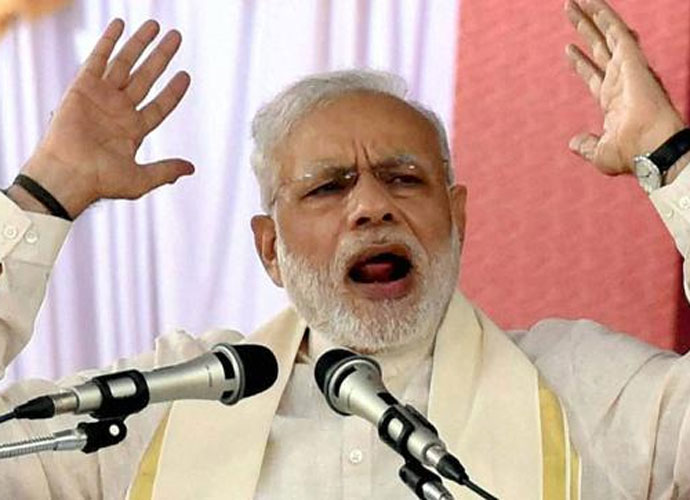 Was Modi unaware of the unfolding drama in Panaji as he held forth on the importance of consensus in nation-building enterprise?

In public, but outside the cut-throats of competitive politics, Modi presents a narrative that sounds almost emancipating and epoch-making in the task of nation building. His victory speech at the BJP headquarters was a typical example of the PM trying to rise above partisan politics and appearing to cast his persona in a statesman-like mould.

Unsuspecting people and a large section of the media fall victim to Modi’s non-partisan, statesman-like narrative. A grand façade, or mukhota, is built, which hides the political greed and grime.

Goa and Manipur electoral verdicts have delivered no ambiguities. BJP lost Goa fair and square. A verdict of 13-17 leaves no room for doubt about the victor and the vanquished. Chief minister Laxmikant Parsekar and as many as six out of the eight ministers lost the election.

Congress emerged as the single largest party even as it failed to get the numbers to form a majority government. The governor, Mridula Sinha, was duty-bound to invite the leader of the Congress party to give him a shot at government formation under the established norms.

If BJP managers had carefully listened to Modi’s speech and gone by its letter, they could have waited for the Congress to exhaust its chances at government formation.

Nitin Gadkari and his people had every right to work and persuade the smaller entities of MGM and GFP not to cast their lot with the Congress. But BJP had a duty and obligation to stake claim to form government only after the Congress had failed.

Evidently, there is a larger script at play in the BJP than what appears on the surface. Who could have instructed Gadkari to defy the established norms of single largest party’s bring the first claimant to get the first shot at government formation?

Was Modi unaware of the unfolding drama in Panaji as he held forth on the importance of consensus in nation-building enterprise? Was Modi kept in the dark about his own moral project being torn into pieces by his own party leaders?

Unlike Goa, BJP’s stellar performance in Manipur was worth and credible to get a chance to form the government. But again, the Congress deserved to be called first by virtue of being the single largest party.

Looking at the gravity of the situation and BJP’s total disregard for established norms and conventions, the Supreme Court has urgently agreed to hear a Congress’ plea challenging Goa governor’s hasty decision to invite Manohar Parrikar to form the government. The chief justice has constituted a two-member bench to hear the case.

In the past, the Supreme Court has scolded state governors for disregarding the claims of the largest party, and for not being invited first to stake claim to form the government. BJP will be embarrassed if the SC sets aside Parrikar’s claim at government formation, reinforcing the established single largest party norm.

It’s likely that the Congress might fail to cobble together a majority in the Goa Assembly. MGP and GFP are likely to stick to their decision to cast their lot with the BJP, and Manohar Parrikar will most likely be the new chief minister at the head of a coalition government.

However, any adverse observations of the Supreme Court against the state governor will be the first major and terrible blow to the Modi’s post-UP verdict avatar of having emerged as the tallest leader in the country.

It will expose the real face of the BJP that Modi has so smartly tried to hide behind the seemingly all-inclusive UP election verdict.

Also read: The bitter truth Goans and Manipuris are coming to terms with

#Manipur elections, #Goa assembly elections, #Narendra Modi, #Assembly elections Results 2017
The views and opinions expressed in this article are those of the authors and do not necessarily reflect the official policy or position of DailyO.in or the India Today Group. The writers are solely responsible for any claims arising out of the contents of this article.