They are state-sponsored killings.

As a school-going student, we learnt to write essays. A popular topic, I remember, was: If I was the prime minister of the country? Such essays would earn the appreciation of teachers and classmates because the heart of a child was full of dreams and hope.

I was happy with what I wrote then. Looking back, however, I believe the essay I wrote was incomplete - and, today, I have found the concluding words. It should read:

"If, as the head of state, I fail to perform my duties of serving the people — and if my government fails to end the pains of the citizens, if I fail to safeguard the lives, dignity and rights of the people, I will resign from the post and office because, then, I would have no moral right and authority to continue in the chair. And I mean it."

I wish the leaders of the nation and its heads of states would read the above lines and adopt them in spirit.

But times have changed. The last drop of shame has evaporated. What else could be more painful that after 62 children's lives were snuffed out, a head of state is trying to convince us that fewer children have died.

Another minister says the death of children in the month of August is obvious. A third says that abandoned oxygen supply is not the reason for the deaths.

Adityanath, the chief minister of Uttar Pradesh, has been representing the state in the Lok Sabha for the last two decades. He is said to be a stickler for cleanliness and hygiene.

However, the medical college of Gorakhpur, where these deaths happened, is one of the dirtiest medical campuses in the country. The horror of encephalitis is not new in the area. Hundreds of children die every year due to the disease, which is directly related to sanitation and hygiene.

I am unable to understand that the man who thinks his religion is constantly under threat has done nothing to seek a cure for an epidemic that kills the children he calls his own. 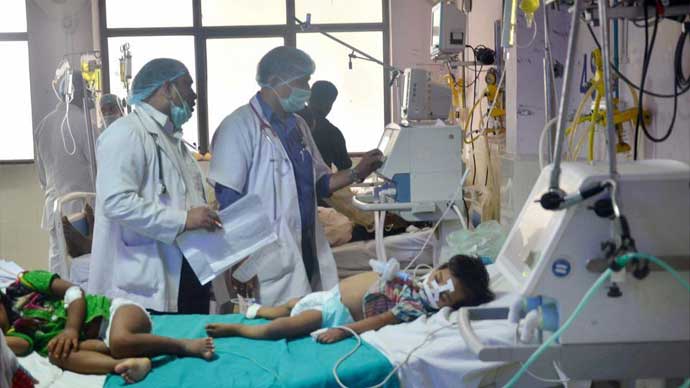 What else could be more painful that after 62 children's lives were snuffed out, a head of state is trying to convince us that fewer children have died.

Adityanath, the head of state, is desperate to bury every question with his crocodile tears and press releases that claim a lesser toll of young, innocent lives.

The chief minister went to BRD medical college and hospital last week. 9 children died that day, and several in the days that followed. The CM is now back in the hospital. With a mask on his face, seemingly attempting to sort out the matter.

But death can't be "sorted out". The forever sleep of these children is the death of our future — and no one compensates for the future, if only the past could.

The country we live in, cries everyday for the security of our borders, over threats from terrorists and infiltration bids.

This unquestionable authority is meant for saving the lives of citizens. But what if the borders are strong and people still die due to the negligence and misconduct of our elected servants?

They are not deaths, but state-sponsored killings. If a state lets its people die, it is indeed a killing. A state's abject insensitivity towards its people is typically terror.

If terrorists are insensitive, so are our representatives. And so the deaths of 62 children too is an act of terror.

The state's health minister has said that there is no need for the post-mortem of those little bodies. This is actually to ensure the truth never comes out.

An emotional Adityanath has claimed that no one else could be more sensitive than him for the 62 children's deaths. Yes, nor is anyone else as responsible for these deaths.

On August 14, the nation will be celebrating Krishna's Janmashtami, just as the mothers of many mourn the deaths of their krishnas.

The very next day, state heads will host the Indian tricolour marking Independence Day. It baffles me that our leaders still have the courage to face the tricolour and their people.

God knows where this cowherd majority is headed.

Post your comment
#Adityanath, #Encephalitis, #Gorakhpur
The views and opinions expressed in this article are those of the authors and do not necessarily reflect the official policy or position of DailyO.in or the India Today Group. The writers are solely responsible for any claims arising out of the contents of this article.